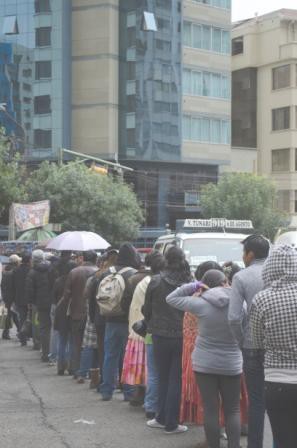 It's rush hour in La Paz and hoards of people are making their way through the city. Queues of pedestrians begin to form as people wait to return to El Alto, some heading home to a meal with their families. First there are four, five; then ten, then fifteen. Before long the queue is thirty deep and 'la espera', as people call it, officially begins. During the city's busiest hours waiting comes hand-in-hand with travelling.

At Plaza Isabel la Católica, we spoke to Xavier as he patiently waited for a seat on a minibus that would take him home to Rio Seco, El Alto. We asked him how much time he spends on average waiting and traveling on a daily basis. ‘It depends’ he told us, ‘but usually, it takes me one and a half hours to get from El Alto to La Paz and around two hours to get back’. Based on Xavier's waiting and travelling time this equates to:

And yet transport is changing in La Paz as the Puma Katari buses and the teleferico are introduced to the city. Will these new forms of transportation shrink waiting times for people coming to and from work?

People we spoke to are hopeful. Some, like Erika Gavincha at Plaza del Obelisco considered the new transport systems a 'beautiful idea'. Xavier thinks 'they are a welcome addition to La Paz, working in the interest of the people'. Everyone hopes the new forms transport will make travelling easier, quicker and much more comfortable in the city. We’ll just have to wait and see.