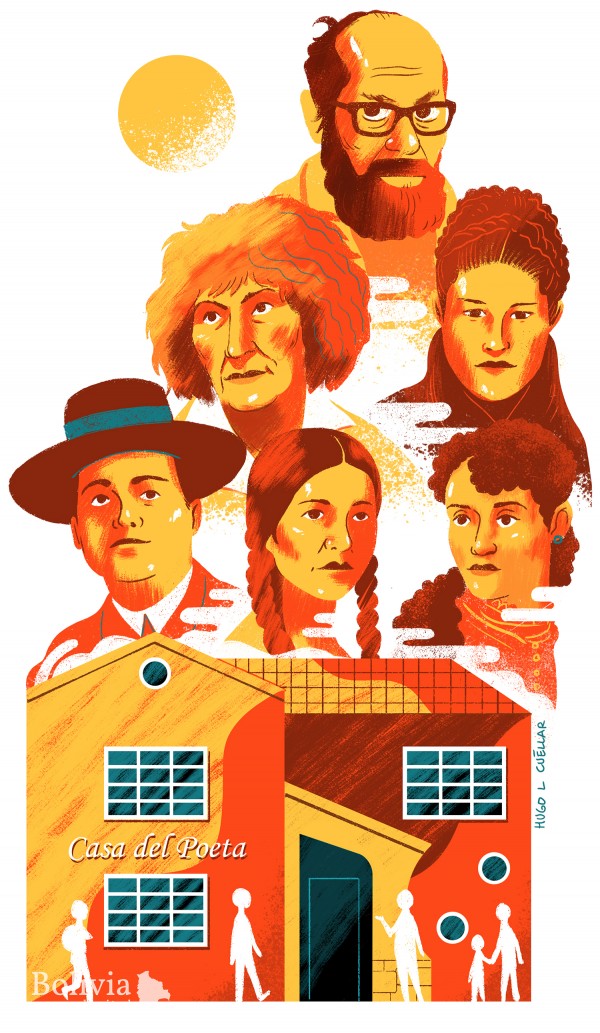 A new space for poetry

Six poets lived in La Casa del Poeta between 1943 and 2012 and, as Fernando Lozada, the building’s administrator points out, ‘They all died here’. In 2012, when the house was falling into disrepair, it was aptly dubbed ‘The Tomb of the Poet.’ If you believe in ghosts, this would probably prompt the image of creaking floorboards and the odd poltergeist hurling books across the room. In reality, the atmosphere is tranquil, the pictures and busts of La Paz’s celebrated poets adorn the walls alongside their poems only as a reminder of house’s distinguished history.

It is this history that La Casa del Poeta seeks to simultaneously preserve and move forward from in its new role in the city. ‘It continues to be called La Casa del Poeta, but as a literary cultural centre,’ Lozada explains. ‘The idea is not to lose the history of the house. It is no longer a home, but a house in the sense of a space.’ With a new hostel for artists and writers in Alto Seguencoma, which is in the south of La Paz, the Casa is liberated from its former role as a residence for Bolivia’s ageing poets, and is therefore free to move in new directions, and host new forms of activities.

In 2012, when Elsa Dorado de Revilla passed away after five years of residence in the house, it was decided to give the house a new life, rather than to accept the requests of new dwellers. ‘Poets who have any money are rare,’ Lozada points out with a smile. More than 60 years without maintenance made the house unfit to live in. The decision to renovate it accompanied the decision to transform the space for the conservation of literature and make it suitable for other functions. One of the new additions is the Franz Tamayo bookstore and library, which has seen a dramatic increase in popularity after it moved from the Municipal Theatre.

Since its reopening on World Poetry Day this year, the 21st of March, La Casa del Poeta has hosted workshops, cultural conferences and a series of weekly lectures that are one of its primary attractions. These lectures attract a broad public of varying generations. ‘Families and contemporaries come to homages,’ Lozada explains, ‘but when [the speakers] are younger the public is more heterogeneous, more diverse.’ The house’s workshops are geared not only towards students of literature but also to a wider public, all as part of the centre’s development from a place for poets to a space for a broad literary community. Another initiative is the proposed publication of an annual poetry anthology, which would physically take poetry out of the Casa and into the hands of others.

Given La Paz’s poetic tradition, poetry continues to be the primary focus of the space, with 70 percent of its activities directed towards this artform. However, the centre’s agenda is gradually branching out into other literary forms such as extracts of novels and essays. Just as La Casa del Poeta is open to all people, it is open to all forms of literary expression, ‘from haikus to novel extracts.’

‘The idea is to not lose the history of the house. It is no longer a home, but a house in the sense of a space.’

And yet poetry remains the genre of choice, inextricable as it is from this country’s culture. ‘I believe that the history of Bolivia without poetry is unthinkable,’ says Lozada. From Jaime Saenz, who according to Lozada is ‘the most paceño poet of the twentieth century’; to female authors such as the Josefa Mugía, or pioneering feminist authors such as Adela Zamudio and Yolanda Bedregal; to more recent literary scholars such as Blanca Wiethüchter or the little-known Quechua and Aymara poets. All are indicative of the country’s longstanding literary tradition. ‘You could never say that this is a country without poets, Lozada continues. ‘It would be as unjust as saying that it is a country without music.’

This doesn’t mean that Bolivian literature is without obstacles. ‘Bolivia is a country of writers who don’t publish, and a public that doesn’t read,’ Lozada admits. The hope is that the country’s affinity with music, can be used to promote a literary engagement with current and future generations of young writers. As Lozada points out, ‘There is a good alliance between writing and music.’Just as music can increase the appeal of poetry, poetry can help elevate the level of the, at times ‘repetitive’, lyrics of folk music.

With that in mind, starting next month, the house will be holding workshops for poets who want to get involved with music and for musicians who want to improve the quality of their lyrics. La Casa del Poeta is not only providing literature with a new physical space, but is also moving it into a new conceptual space.

‘I believe that the history of Bolivia without poetry is unthinkable.’

—Fernando Lozada, Manager of the house

The ghosts of Jaime Saenz and his compatriots, if they are still in residence, must be satisfied with the new role of their final resting place.