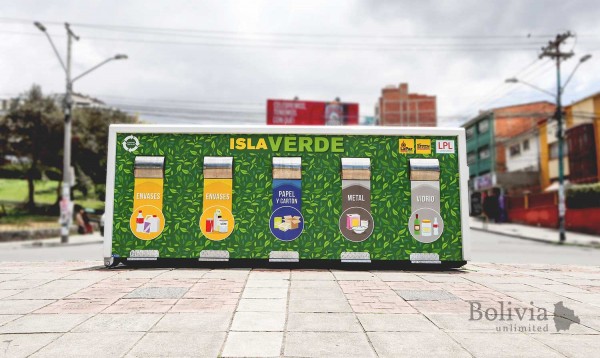 If you have walked around La Paz you may have noticed graffitti that reads ‘La basura mata, prohibido echar basura.’ The message is clear: ‘Waste kills, it is forbidden to litter’; you can be fined up to 1,000 bolivianos (US$145). How does this message reflect waste management in La Paz? Are people aware that mismanaged garbage has a negative impact on the environment?

In 2018, the World Bank warned us that global annual waste generation could increase to 70 percent by 2050 if no proper action was taken. In 2016, 2.01 billion tonnes of waste were generated worldwide, which could become 3.4 billion tonnes 30 years from now. In its report ‘What a Waste 2.0: A global snapshot of solid waste management to 2050’, the World Bank gives a summary of the total waste generated in different countries. The global average is 0.74kg of daily waste produced per person. If we have a look at Latin America, Bolivia generates 0.55kg of daily waste per head, which is relatively low if you compare it to Peru (0.75kg) and Ecuador (0.89kg). Although waste generation in Bolivia is lower, the collection of this waste is not managed as well as neighbouring countries. The report shows that La Paz only collects 90 percent of its waste, while in Quito, Ecuador they are able to collect 96 percent.

In La Paz, waste containers seem to be frequently used and the city’s streets are fairly clean, but there isn’t a proactive attitude towards recycling or separating your plastic, glass and metal, and at supermarkets, they always wrap up your groceries in plastic bags. Nevertheless, the local government is making an effort. In 2015, they introduced the ‘Plan Integral La Paz 2040’ (Integral Plan for La Paz 2040). One of the objectives is to implement sustainable and eco-efficient changes in the city. They plan to introduce separation recycling methods, separate waste collection and the recycling of solid waste; the prevention, mitigation and control of contaminated water, air and soil; and environmental campaigns designed to sensitise and educate paceños.

The plan had a good start and in 2014 they introduced Puntos Verdes (Green Points) in different areas in La Paz. These are points where you can donate your separated, recyclable trash. In the same year, they launched the Plastimadera initiative, which turns recycled plastic into school furniture. Although the Puntos Verdes campaign was operating on a daily basis, over the years their activeness has decreased. Ruby July Peñaranda Espinoza, a postgraduate student who currently studies at the Latin American Faculty of Social Sciences in Mexico, wrote her thesis on waste management in La Paz between 2012 and 2017. She observed how the new Plan Integral of 2040 was introduced and how it functions next to the existing waste separation system. For years, segregadores (waste separators) have been working on waste separation and collection in La Paz. They voluntarily collect, for example, cartons on the streets and sell them in bigger quantities to centros de acopio (collection centres), who then collect certain types of waste and resell them to recycling companies. In fact, anyone is free to sell their household waste – such as paper, plastic and metal – to these collection centres for a price. So, there is a very low incentive to donate your waste for free.

Anyone is free to sell their household waste – such as paper, plastic and metal – to these collection centres for a price. So, there is a very low incentive to donate your waste for free.

The reason why recycling initiatives exist is because there is a market for it. ‘The economic factor is still more important than the ecological one,’ explains Peñaranda. On the other hand, the Puntos Verdes were not as successful as they thought they would be due to a lack of capacity. According to Peñaranda, there were not enough employees and space. In addition, they only recovered a small percentage of the recyclable waste and could not compete with the segregadores.

But, environmental awareness is growing. Verónica López, general coordinator of the Municipal Secretary of Environmental Management, emphasises that La Paz is one of the most advanced cities in Bolivia and it plays an exemplary role in terms of waste management. López explains that they share their model of integrated waste management and eco-efficiency with other Bolivian cities. Additionally, the municipality plans to include the segregadores into the integrated government system.

According to Peñaranda, the landslide in the sanitary landfill of Alpacoma was a turning point. In 2019, there was a landslide in one of the disposal cells of the landfill and it caused, not only a great danger for the environment and people that lived nearby, but also some serious logistical problems in La Paz. Workers and inhabitants of neighbouring communities blocked the entrance to the landfill to avoid more waste from coming into the landfill. With no other place to go, the waste accumulated in the streets of the city. ‘Normally people would get rid of their garbage without even thinking about it and they would never see it again, but paceños were faced with having to manage their own trash. After this incident, the focus on recycling, separation of waste and waste reduction increased a lot,’ tells Peñaranda. People also experienced economic consequences: because of the accumulating trash in the streets, rats and contamination were becoming a problem for vendors, which led to fewer buyers and a decreased number of sales.

Attitude towards recycling in La Paz seems to have really changed in the past three years.

In 2018, the municipality launched a new project, Islas Verdes (Green Islands), another system introduced for waste separation in La Paz. Alongside the organisation Voluntariado Ambiental Municipal, they have been educating La Paz on environmental matters. At global events, like Earth Hour and World Water Day, they engage with citizens and inform them about climate change and tell them how to take care of the environment. According to the Municipal News Agency, they collected more than 250 tonnes of solid waste over the past two years, which was recycled into new products. In an article for Página Siete, journalist Luis Escobar writes about how this quantity makes a huge difference to the 36.1 tonnes of waste that was recycled in 2014. The municipality started by putting the recycling containers in the neighbourhoods of Miraflores and Achumani. According to another article by Página Siete published in June 2019, the municipality announced that they would expand to using 560 more waste containers: 40 new Islas Verdes, 120 coloured containers to separate by type of waste and 400 smaller bins in schools. On top of that, in December 2019, they installed 25 paper containers with WiFi networks powered by solar energy.

Attitude towards recycling in La Paz seems to have really changed in the past three years. López explains that it is hard work, but people are learning and the system in La Paz has improved a lot. The municipality goes from door to door, informing the public and instructing them on how to do waste separation from home. With its thriving integrated waste management system, La Paz has become exemplary to other Bolivian cities.