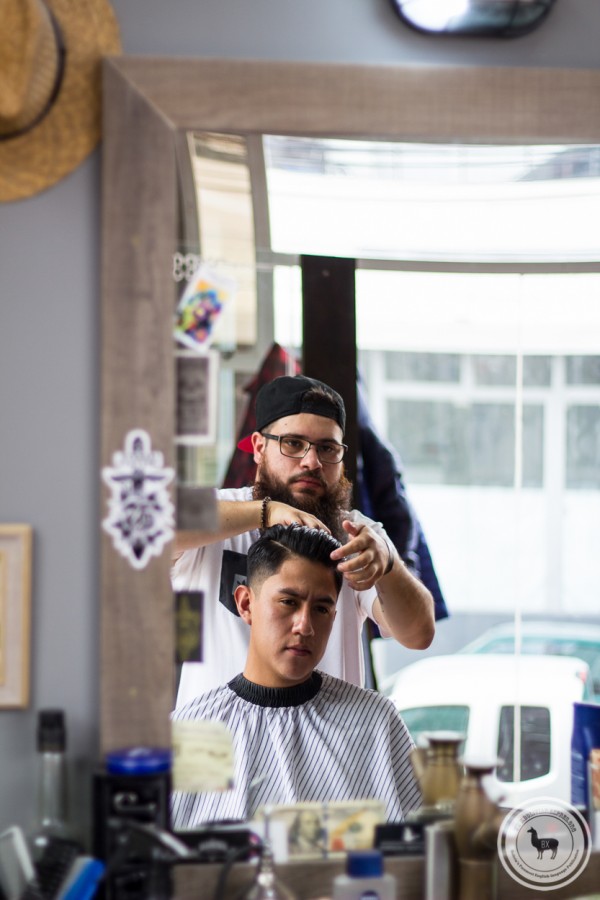 Redefining the haircut experience in Bolivia

Beard trimming is not just a trend, it is an art. However, both beards and haircuts do follow the fashion of the times, which, as we know, come and go with the regularity of the tides. This is exactly why, last December, in La Paz’s Zona Sur – Calle Jaime Mendoza, San Miguel, to be precise – Rodrigo Álvarez unveiled ‘La Barbería La Paz’, a vintage barber shop that seems to breathe that Gatsby-esque New York atmosphere of the roaring twenties, providing a nostalgic and traditional service.

The original idea behind La Barbería – ‘a simple idea with a vintage style and quality service’, to quote its owner – wasn’t actually Rodrigo’s. In fact, he drew inspiration from the first time he visited a barbería in Santa Cruz, where he fell utterly in love with the treatment he received and the style of the shop. Then, after becoming a partner of La Barbería in Santa Cruz, he decided to open his own shop. This is a revolutionary development, considering that Bolivia has a limited barber-shop heritage, while hairdressers have long been a part of its everyday culture. For this reason, many barbers here are from foreign countries, most of them from Latin America, but at least one from Ukraine. While the traditional barber has always – according to stereotype – been male, nowadays it is becoming an occupation independent of gender. According to Rodrigo, the first female barber in Bolivia (from Venezuela) works in La Barbería in Santa Cruz.

Another innovative and unique selling point is the service La Barbería provides to its customers. Not only does it offer a haircut or beard trimming with sophisticated techniques, such as the toalla caliente (a hot towel softly placed on the face that helps dilate the pores and warm up the skin to guarantee a perfect beard cut), but also a complete and lasting experience enriched by the chance to drink local whiskeys or other liquors. Furthermore, customers who – perhaps surprisingly – vary between sixteen and sixty-five years old, can choose a range of haircuts represented on a little painting in the middle of the wall, or otherwise they can bring their own photos and ask for exactly what they want.

Moreover, the décor smacks of an old-school barber shop, a virtual relic nowadays, in which a barber wasn’t just a barber, but a personal counsellor too. The seats have been delicately refurbished to look as they did originally. On a small wooden sideboard sits an ancient radio dating back to 1930, which is still in perfect working condition. Around it stand a series of products prepared with natural essences (some of them homemade) for the treatment of beards and hair.

Rodrigo claims to have ‘changed the paradigm of barber shops, replacing a twenty-minute service with a relaxing and long experience.’ With kindness and good manners, he has turned La Barbería into a growing franchise. There are now two shops in Santa Cruz and one in La Paz. In Santa Cruz, Rodrigo and his business partner recently forged an alliance with Hotel Camino Real to create a luxury barbershop, called ‘Business Club’.

Due to its active social media presence, La Barbería has reached a substantial crowd with its unique ideas. It has almost 40,000 followers on four different pages on Facebook. Given La Barbería’s increasing popularity, it seems there is nothing to stop its potential success in other cities in Bolivia or South America.