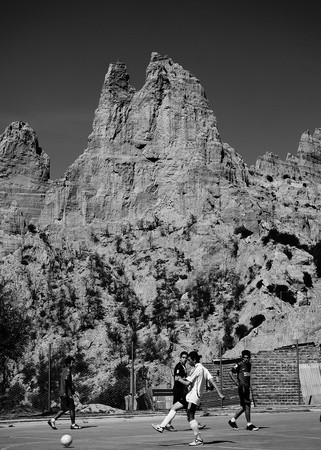 As Club Bolívar take on San Lorenzo for the semi-finals of the Copa de Libertadores on 30th July, the longstanding question of an apparent 'altitude advantage' is yet again brought to the surface. This debate has been at the centre of a notorious footballing contretemps between Bolivia and Argentina. Visitors to La Paz’s Estadio Hernando Siles at 3,637 metres above sea level, have had some shocking results – notably a 6 -1 defeat of Maradona's side in 2009. In a recent match where the score ended 1-1, some of the Argentinian side had to call for oxygen masks and performed questionable acts of fainting at half-time to an unconvinced Bolivian audience.

In 2007, FIFA banned international matches played in stadiums situated above 2,500 metres, including La Paz and a number of other Andean cities. Bolivian President Evo Morales reacted with disgust, calling it a 'football apartheid', and organised 1 million letters of complaint to Joseph Sepp Blatter, the president of FIFA. Morales even played a historic game on the Sajama Peak at 6,000 metres to prove that it had very little effect on the body. Quite rightly, the ban on Estadio Hernando Siles was overturned a year later. But is this problem really such a myth as many Bolivians would suggest?

‘You breath 35 percent less oxygen up here’, Dr Guillermo Aponte, Club Bolivar’s medical director and a member of the Bolivian Commission for Defence of High Altitudes, remarks, ‘leaving your haemoglobin with less to carry around to cells in your body’. As a result, players coming to La Paz suffer from increased heart rates, and lowered metabolism, with stamina reduced by 25 to 32 percent, according to Dr. Aponte.

However, those living at high altitude have it hard too. When they go down to play at sea level, the symptoms are more severe. The atmosphere is obviously thicker and, while you would think the extra oxygen would act as a saviour, it actually causes the entire nervous system to diminish, slows the heart rate, and causes swelling in the feet (not good for putting on those new football boots). Many Bolivian players record an increase in sickness and fatigue. ‘There are more problems when you go down than when you go up’, Dr Aponte concluded. ‘We don’t have a single international title; if the high altitude really was an advantage, we would be champions every year.’

I then ask about Argentina. ‘The problem with the Argentines is that they have made it a very psychological subject.’ When looking at the international scores in La Paz, it seems like the other South American countries are barely affected. The so-called 'Spanish Reinforcements' (Moya, Capdevila and Callejón) of Club Bolívar who joined a year ago have experienced no problems at all. ‘[The Argentinians] have a special fear of coming to the high areas of Bolívar’, Dr Aponte said. ‘They don’t like the country; they don't like the cold air. They are paranoid and tend to analyse every single aspect of football, and the Argentinian Institute of High Altitude Research thinks that it could be dangerous.’ Dr. Aponte dismisses the claim by saying there have never been any casualties, and explains that it's actually much more dangerous to play in areas of high temperature. ‘Altitude doesn't kill you. Heat is much more dangerous.’ (Congratulations goes to FIFA for choosing a 50-degree Qatar to host the World Cup in 2022. High-altitude matches, bad. Extreme heat, corruption and slave labour, fine. Nice, FIFA.)

Dr Aponte's vehement repetition of 'they' is another articulation of Bolivian-Argentinian attitudes towards each other. He points to the fact that the Argentines started to blame the altitude very late on in the 90s (as if La Paz had been at sea-level before then), just when Bolivia had started to become a footballing threat.

These kind of underlying political conflicts are often reflected in football. Take the war between El Salvador and Honduras in 1969 as a famous example, when it took a disastrous football match to act as the tipping point for their relations to collapse. Argentina's history with Bolivia is wrought with racism and mutual mistrust: Bolivians still make up the majority of those who forge a living picking fruit and vegetables around the slums of Buenos Aires. It comes at no surprise that these problems are mirrored in a football rivalry.

So was this 'altura' problem all psychological as a lot of people say? Playing football in La Paz left me gasping and wheezing like a strangled goose. This would have been partly from the lack of oxygen, but then perhaps also from my own brain playing tricks given that I had spent the previous day researching all the effects and symptoms. The scientific evidence cannot be denied, though, it's just up to the effect on your mind to make it a whole lot worse. However, even if there is an advantage, people forget that we are in a beautiful continent spanning from vast tropical rainforests to great mountain ranges. This gives us a range of climatic conditions and different altitudes, extreme temperatures and humidity, and all sorts of other unique characteristics. To adapt physically and psychologically to these particular conditions (as well as to a rowdy home crowd) is one of the great challenges in football, and so incongruous to the unpredictability and surprise of the game.

-Who will be affected by altitude sickness really just depends on genetics.

=The adaptive mechanisms will kick in between 38 hours and 20 days.

-The most common symptoms are a headache, shortness of breath, sleeping troubles, and lack of appetite.

-Oxygen is the main treatment, it will eliminate 90% of your problems. Some herbal recommendations include coca leaves, ginger tea, and onion and garlic soup.

-For footballers: the best thing to do is to arrive a few hours before the game and then leave, and so you will not give your body enough time to start the adaptation system. However it will always be a shock to play. Your perception of the ball is different as it doesn’t curve and comes faster at you (bad news for Beckham free kicks if he ever decided to join Bolivar).