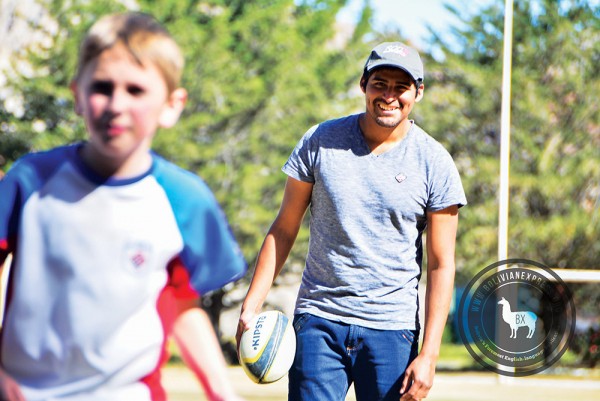 A Franco-Bolivian Brings Rugby to the Altiplano

I meet Jean Fontayne under the shadow of the Basilica of San Francisco, in central La Paz, on a crisp morning. We have a four-hour bus journey into the heart of the altiplano ahead of us. For Jean, this is a routine trip, as he has been travelling this route weekly since March. But today we miss the bus to Santiago de Machaca, a town that sits just south of Lake Titicaca on the altiplano near the Peruvian border. We are told that the bus will wait for us down the road so we frantically board a minibus heading in the same direction. I have little faith that the bus will be there waiting for us, but I am proved wrong. As we find our seats, we let out a harmonious sigh of relief and Jean remarks, ‘In Bolivia, everything is possible.’ This has never felt more true.

This philosophy—‘In Bolivia, everything is possible’—is what has inspired Jean throughout his life and led him to teach rugby in Santiago de Machaca. Here, in this small town of 4,000 people, something decidedly untraditional is occurring this year. We pick a quiet spot on the edge of the town to sit down and discuss what is happening.

Born in Oruro in 1990, Jean spent his first few months of life in an orphanage. He was discovered by a friend of a couple who would eventually become Jean’s parents, who noted that Jean ‘was holding on to life by holding on to him’ when he picked the baby up. The man phoned his friends back in France who had a desire to adopt and told them about this sweet Bolivian boy he had just met. Within weeks, Jean was adopted.

Growing up in France was fantastic, Jean recalls, but when he was 26 and had finished his studies, he decided to travel to his country of birth. He arrived in Santiago de Machaca a few months later, for work with Macha’k Wayra, a French non-governmental organisation. Based here since 2005, Macha’k Wayra educates populations with agricultural projects. While doing this, Jean soon began brainstorming other ways he could aid the community.

When asking him whether he found it difficult to transition into such a culturally different place from France, he expresses few qualms. He mentions how the language was tricky at first but he made sure, with intensive lessons, that when he returned to Bolivia he would be able to speak coherent Spanish.

‘In Bolivia, everything is possible.’

Having played rugby since he was five years old, Jean is passionate about the sport, and he is talented too—he was even pre-selected to play for the Bolivian national team. Seeing how much spare time the children had when not in school, he decided that teaching them rugby would be a productive use of their recreational time.

Setting up training sessions at the town’s artificial pitch, he taught boys and girls ages 8 to 12. After beginning with the basics, he could tell they were enjoying it and therefore wanted to expand and reach out to surrounding places. This past May, he organised a tournament for boys and girls from Santiago de Machaca alongside a mixed team from Catacora and a boys' team from La Paz’s Franco-Bolivian school. It was a great success, with most of the town turning up to watch the game and the children sharing traditional Andean food.

Jean says that the school day here ‘usually starts at 8:30am and ends at 12:30pm, meaning the children have a lot of free time to try and occupy themselves until their parents come home from work at around 6pm.' Jean’s rugby league is vital, providing the kids with an activity and an outlet for their energy.

It is clear how admired Jean is in Santiago. Everyone we pass recognises him. ‘¡Hola!’ and ‘Buenas tardes’ greetings fly at us from all angles. Children run up with arms extended, and Jean greets each one with similar and generous affection.

And Jean has more plans. He wants to open a socio-cultural centre where, in their free time, children can come and learn about different cultures. It will also be a place to read, watch movies and play games—activities that the majority of children here rarely have the opportunity to partake in.

Waiting to board the bus back to La Paz, I watch the town wake up with the rising sun. I feel fortunate to have visited a place where so much has positively changed in recent years.

Whilst watching the children of Santiago de Machaca make their way to school, I remember their infectious enthusiasm for rugby. Who would have thought that in such a rural town in a country obsessed with football, rugby could spark such a sense of community? I recall one of the first things Jean said to me just 24 hours before: ‘In Bolivia, everything is possible.’ The future for both Santiago de Machaca and Jean Fontayne looks blissfully bright.

Jean can be reached via the following: