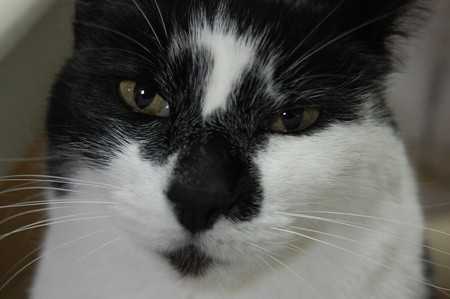 Our dear feline friend Kandinsky, known by the hundreds of people who passed through the Bolivian Express flat, passed away on the 9th of October 2012. His human father, Amaru Villanueva Rance, remembers a life lived in purrs.

Kandinsky was born on my sister's bed in 2003, on a month no-one now seems to be able to pinpoint. The smallest kitten in a litter of four, he was spoiled from a young age, for some time by his mother Gata and until his very last days by the inhabitants of the Rance household. His three siblings were given away: the alpha kitten, who later came to be known as Martes, was snapped up by a niece; the other two were given away to friends of my sister’s. Kandinsky, 'the slow one', was the one who remained, so although he was not chosen by anyone, he was in a strange way the one chosen to stay with us.

On the day my family moved to the penthouse flat where Kandinsky was to spend most of his life, he immediately realised something big was afoot. He acrobatically escaped several times from my sister who was frantically trying to get him into a taxi that was waiting at the door. Trembling and forlorn, he eventually realised there was no way out. Resigned, he surrendered to the embrace of my sister’s hands and hid his head in the towel she was carrying, as if to say ‘ojos que no ven, corazón que no siente’ - what you can’t see can’t harm you. Making a conscious decision not to look back, he was cradled into the taxi to face life in his new home.

Kandinski was neutered from a young age, in part to stop him spraying, and in part because our incest taboo was challenged by the increasingly randy behaviour that evolved between him and his mother Gata. I’m certain this mutilation had an incalculable impact on the development of his sexuality and general temperament. 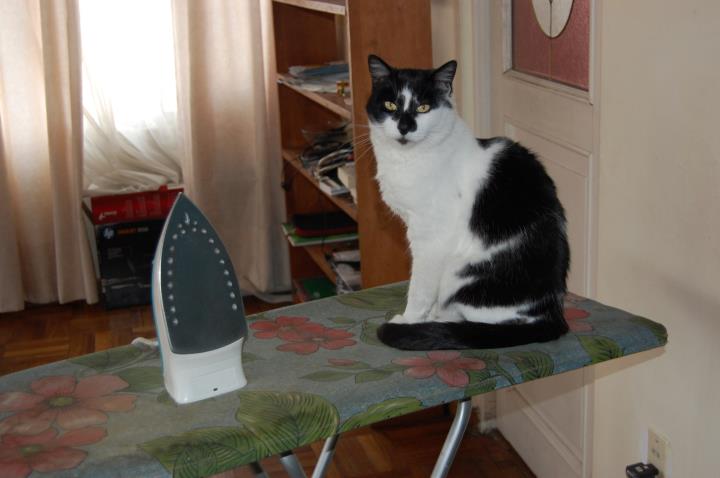 At some point during his youth, a Siamese kitten entered the household. Her name was Gatita, in keeping with the uninspired family naming conventions for female cats. She later became known as Moka (both on account of the colouring of her fur and the Spanish word for 'little snot'). Kandinsky and Gatita appeared to date for some years, much to his mother's despair. When I say 'date', I ought to make it clear that their relationship was largely platonic and that despite her occasional interest in him as a mating partner, after his castration he was only ever able to reciprocate through his signature vanilla cuddles and perennial willingness to use her as a napping partner. Moka was eventually given away due to the incessant and sometimes vicious fighting which erupted between her and her mother-in-law. I liked to think they fought over Kandinsky - who rose above the bickering - and his affections, without it ever being clear whether he was indifferent or merely oblivious. Either way, my mother would say that he was a 'sexist pig' - shrugging his shoulders to the oestrogen apocalypse erupting all around him. She would say he had ‘cara de yo no fuí’ (an ‘I didn’t do it’ look of feigned innocence), and I must say that few descriptions have captured his spirit and appearance with such accuracy.

I'm pretty sure I was the only being he was ever truly in love with. He would stare longingly into my eyes, holding my gaze for several seconds longer than I was comfortable with, often weirding me out. Like many cats, he liked to think of himself as the centre of attention in all situations, and he frequently was. 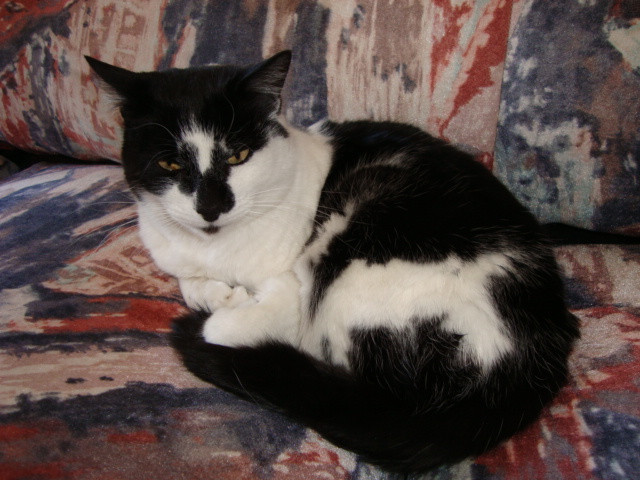 Despite his deluded sense of self-importance, Kandinsky was a pathetic being - he had zero dignity and seldom displayed the integrity and finesse associated with cat archetypes, of which his mother Gata undoubtedly remains a better exemplar. He was more like a dog. Yet make no mistake: his pathetic-ness was, perhaps, his most endearing trait. Minutes after meeting him, guests could pick him up, hold him upside down, cradle him like a baby and make him play a miniature air-guitar, without him putting up any sort of resistance aside from the occasional feeble meow.

I came to believe he was the product of some reincarnation conjured up by some god to punish a morally-corrupt-yet-incompetent being of a higher order, like a petty thief or a greedy dolphin. The point is that he seemed to be on a downward trajectory in the cosmic order of the universe. Yet despite his simplicity and semi-inanimate inertia, he most likely redeemed himself during the short decade his life lasted and did so not through a courageous or benevolent disposition, but by unknowingly brightening the lives of the hundreds of people who had a chance to meet him. If there's justice in the afterlife he might return as something noble and simple like a benevolent beluga whale, or even as himself, should he be given a chance to relive a happy and unphilosophical life. 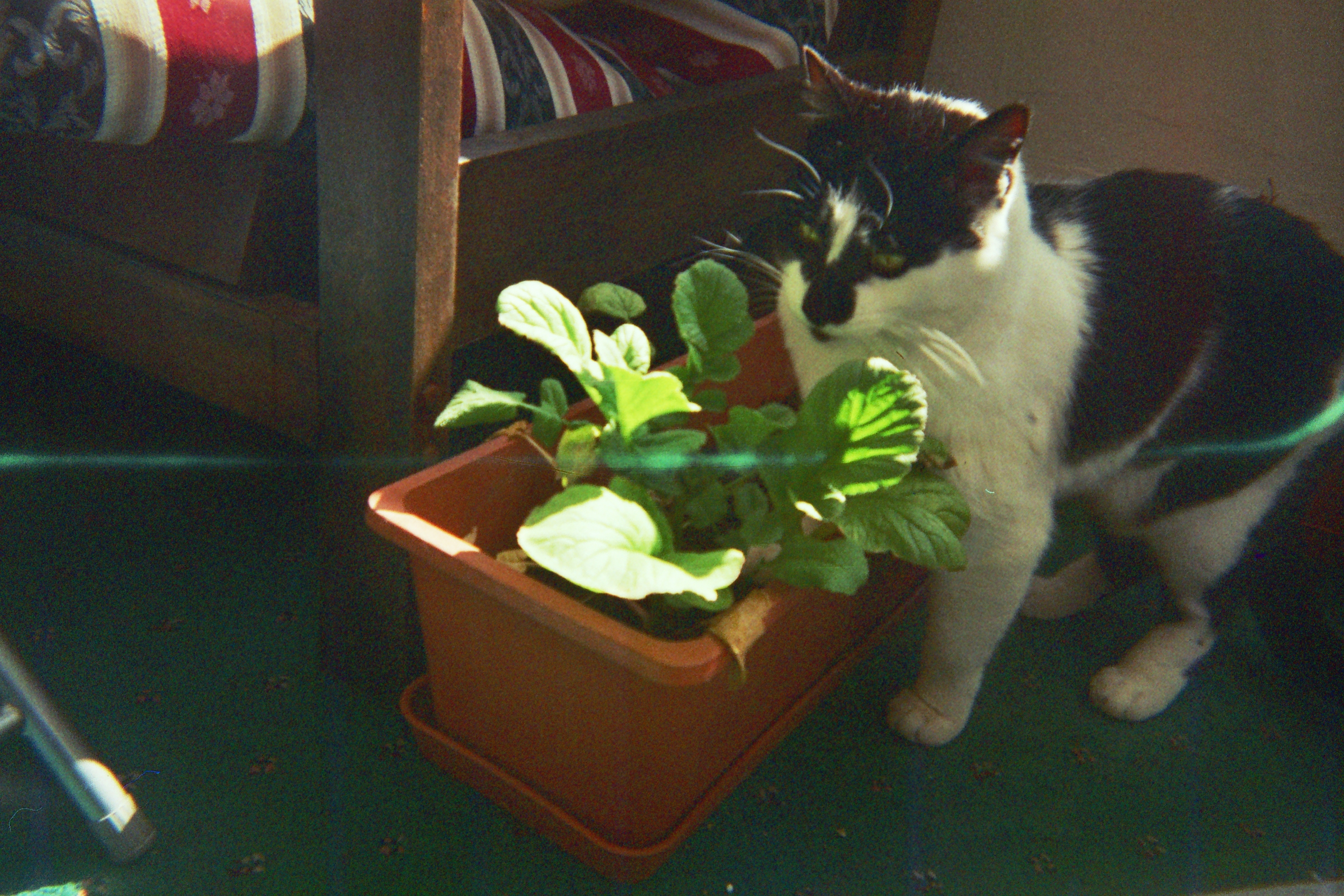 What was he like? He was an easy cat. Easy in that he was easygoing, and easy in that he was socially promiscuous and all-too-easily won over by complete strangers. He quickly warmed to the endless stream of people coming in and out of the flat, approaching them with under-alertness and over-familiarity. Kandinsky was communicative, if confused; mistakenly thinking he could hold conversations with humans. I remember him rubbing himself against my legs when he decided it was food time. He was grateful and appreciative of cow lung, which the flat's inhabitants invariably hated and the thought of which makes some wretch, even now.

My fondest memories of him involve holding him every which way: stretched out like a baby, cradled in my arms, nested under my shirt. He was invariably inert, you could remould him into any shape and he would just stay that way. 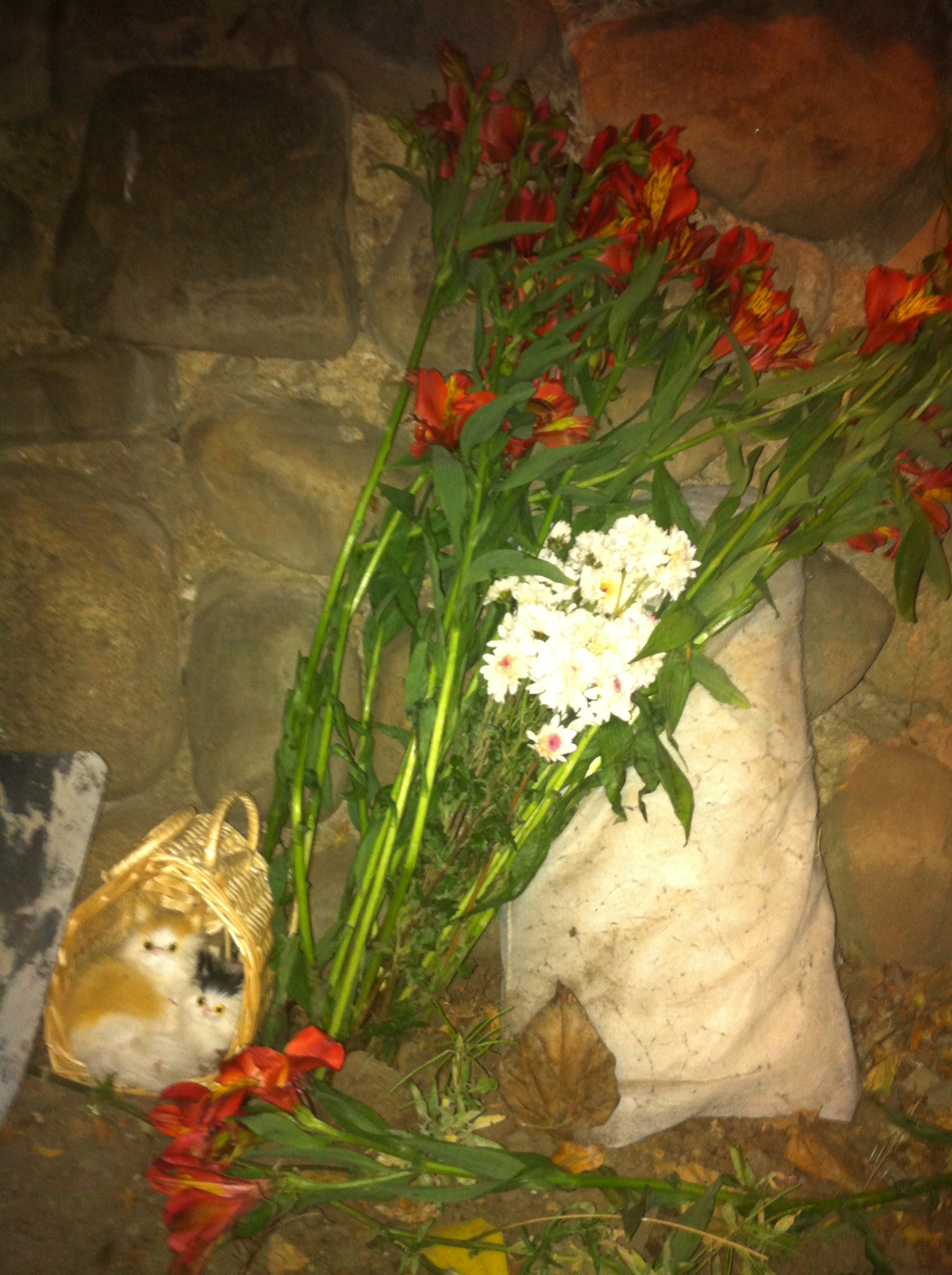 Depending on who you ask, cats have seven to nine lives. Whether or not this is true, most cats certainly need at least this many to dodge death from their natural sworn enemies: cars, murderous neighbours (two of my previous cats were poisoned by my former next-door neighbours - fact), dogs and even other cats. Kandinsky only had one, and it's the only life he should have needed. Unlike my previous cats he was not exposed to the dangers of the streets, courtyards and rooftops of La Paz - he lived in a penthouse flat most of his life and had no fears - not because he was brave, but because he knew no dangers. The world happened outside the windows of the flat like images in a multi-display reality TV-arrangement. Always there, always out of reach. Looking out of the kitchen window now I can see the majestic Illimani mountain, taking up an inconceivably large proportion of the horizon; the sky-blue sky and the thousands of people walking up and down the city's arteries. This is not the the last scene he saw, though one he was all too familiar with, during the countless hours he spent sat on the cassette player on the kitchen table. In true feline fashion he would look down on the dots streaming up and down the Avenida 20 de Octubre, probably never registering he was looking at people and cars.

Why did he go? When I told my father the news, he told me that in Aymara culture pets are seen as people's spiritual guardians. When they leave us unexpectedly it means that the family they are a part of was in danger. "When the animal senses this, they absorb the impact of that bad thing that would otherwise happen to one of the members of the family". I don't know whether the thought of this now makes me happy or sad, but it makes me wish that he didn't die thinking it was in vain; makes me feel, in a melancholy way, that his death was at least as meaningful as his life. 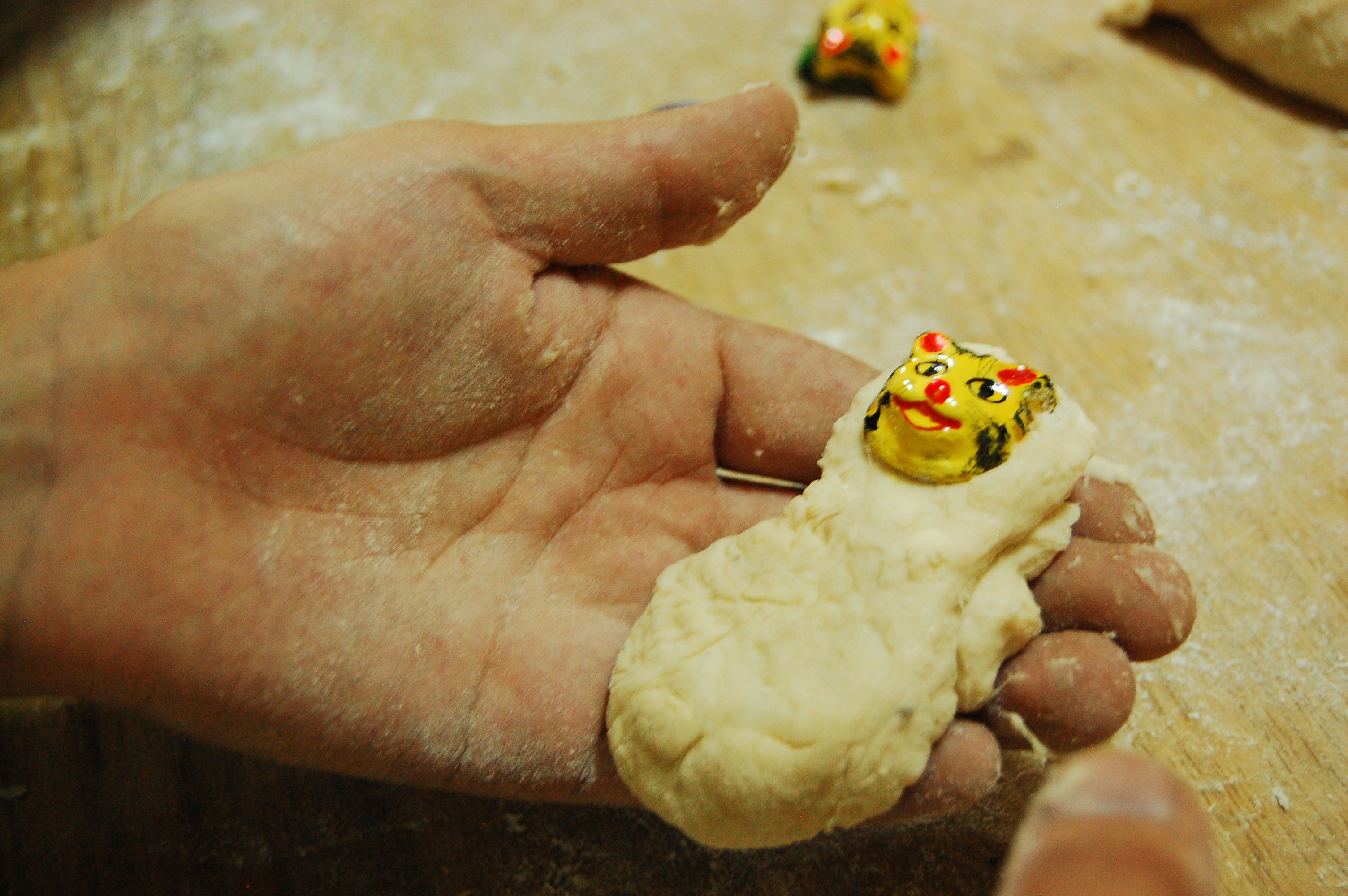 I had seen him pussyfooting sheepishly onto that window ledge before; a few years ago. Someone had left the window open just wide enough for a cat's reptilian body to slip through. They don't say curiosity killed the cat for nothing. ’Kandinsky no!’ - the ledge was narrow and up 19 stories of glass and concrete. There was barely enough room on that ledge for a set of paws, let alone for a cat to turn around and climb back into the window. I managed to pull him in on that occasion and on another such occasion my mother managed to beckon him back somehow. This time he wasn't so lucky. It happened at night and no-one saw him climb out, let alone fall. I'm pretty certain he jumped. The way he landed, paws outstretched, whiskers now touching the pavement. He probably thought he could fly.

Kandinsky is survived by his mother, Gata, by his human family carers, and by his 78 Facebook friends.