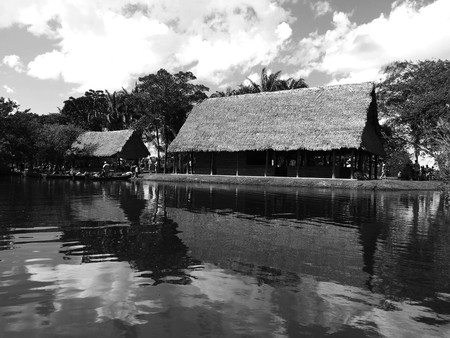 Thirty journalists, armed with tripods, microphones and stage makeup, are sent into the jungle by the Ministry of Tourism to see what Bolivia’s Amazon has to offer.

T-shirts, bare legs and high humidity: We’d arrived in Rurrenabaque. ‘Where?’ you might say, and you wouldn’t be the only one. If we were playing the word-association game for Bolivian-travel hot spots, you’d probably shout out ‘Salt Flats, La Paz, Copacabana’ before running out of ideas. That’s why the Ministry of Tourism sent us journalists on a mission to promote Bolivia’s ‘Heart of the Amazon’.

Foreigners like myself are often unfamiliar with Bolivia’s Beni department, just to the northeast of La Paz and where Rurrenabaque is located, but it’s even less visited by Bolivians.

Flicking through the aeroplane magazine as we take off towards the unknown (on the kind of plane where you can glimpse the cockpit as you duck to enter), the statistics suggest that this story is a common one. Even though Beni is Bolivia’s second-largest department, only 5 percent of its yearly visitors are Bolivians, the rest being from abroad.

So why is this the case?

‘It’s a question of accessibility’, a journalist from the Bolivian newspaper La Razón says as he stares out the open bus window onto the dirt track we’re travelling along. To cross one of Beni’s numerous rivers, all of which are tributaries to the Amazon, we have to wait to board large wooden rafts that ferry us and our bus across. As the location of the river banks is variable depending on the rain, no bridges can be built and, when they have been proposed in the past, those who privately own these ferry systems opposed them.

Later at lunch, an ATB Santa Cruz journalist says that ‘it’s also an economic issue’, since the easiest way to get to the area is not by bus but by a rather more expensive plane. He finishes his mouthful of fish and picks some more out of the patujú leaf it was cooked in. The patujú, being red, yellow, and green like the Bolivian flag, is one of the national flowers of Bolivia, native to the Amazon region.

Speaking to some representatives of tour companies that afternoon in Rurrenabaque, I hear some ideas about why there are so few Bolivian tourists here in Beni. A representative from Madidi Travel, a local eco-tourism agency, comments, ‘It’s sad that foreigners enjoy the area but that many Bolivians don’t know the beauty of the region. For this reason we have a special price for nationals.’

However, it’s all very well going on about how no one comes to visit Beni, but there are plenty of reasons why people don’t visit many locations on this earth—one being that there just isn’t that much to see. But this is most definitely not the case in this region.

Against a background of ink-shadowed mountains, we are welcomed into a former Jesuit mission town, San Ignacio de Moxos, with indigenous dance, dress, music and a wooden bowl full of chicha de jamón, which is part of a tradition that shows the locals’ hospitality.

Wearing the community’s traditional male garments (long white overalls with delicate red embroidery around the edges) the sub-gobernador indígena introduces us to ‘the living, rich culture of the Mojos’. The Llanos de Mojos is the savannah-like area the Sirionó, Cacyubabas, Movima, Itonama, Canichana and Baure indigenous peoples call home. This indigenous diversity is offset by mission architecture that is still preserved in the town.

Sheila Villar, the head of culture in San Ignacio, describes life here: ‘We still live by our traditions today, for example, our Semana Santa and the Fiesta Patronal festivals.’

But Beni isn’t just small towns in the middle of the llanos. In Trinidad, motorbikes whizz around a busy plaza mayor, and sloths, which inhabited the area long before humans did, hang from the surrounding trees. There, you’re given a plate of lagarto to eat, and can listen to live music influenced by the region’s close ties to Brazil.

And then picture jumping onto the Flotel Raina de Enín (a floating hotel, or ‘floatel’, if you will) to follow the ruta del bufeo, spotting pink dolphins and fishing for piranha, before heading on a jungle tour and being introduced to ants that can inflict 24 hours of pain with a single bite and to the tree from which cacao, the precursor to chocolate, is harvested.

After exploring all day and heading back to the rooftop terrace of the floatel, I talk to Jaime Ballivián, head of the Community Tourism Unit of the Vice Ministry of Tourism, about the motives behind this publicity project, as the sun sets behind the Bolivian flag flying from the floatel’s stern. ‘We’re innovating in the form of promotion’, Ballivián says. ‘We want to show our diversity. Bolivia is not just the altiplano…. This is a determined campaign at an international level.’

Ballivián continues while keeping one eye on the waters to try and spot more of Beni’s famous pink dolphins: ‘The idea of tourism is really only just being born in Bolivia. Money was an issue before for Bolivians, but now the standard of living is rising, so people are starting to travel a little more.’

On the issue of accessibility, which seems to be a recurring theme amongst the issues travel agencies face, Ballivián says that ‘Although it does not fall under our domain, by showing these regions in the press we hope attention will be brought to the problems of accessibility. It’s a process.’

On our final day being herded around Bolivia’s Amazon, it hits home how foreign the presence of cameras is here. While one TV presenter applies her bright pink lipstick to match her sheer neon pink shirt and starts to walk animatedly towards the camera, a group of Trinidad locals look on bemused. Their expressions match what mine must have been when we were wandering around the preserved fish museum earlier that morning.

But tourism is new here, and that’s a fact. With increasing publicity, spurred by the national and departmental governments, these collisions of different cultures will continue and, perhaps in the not too distant future, will become part of the norm.

Maybe Beni will be the new salt flats tourist destination in a decade’s time. Who knows?