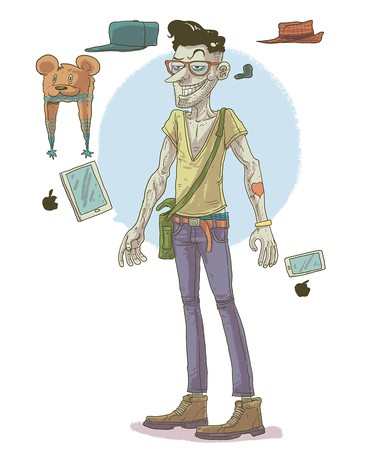 I want to talk, without pretending that this an exhaustive study of the issue, about a slang word that many people use to describe a young and wealthy social group, mostly concentrated in the Zona Sur of La Paz, that is considered “elite”: los Jailones.

Jailón comes from the English phrases “High life” (Jaila) or “High Society.” Amongst young people in La Paz the term can be derogatory because jailones are often seen as having done nothing to earn the items they flaunt, be they cars, clothes, or mobile phones, which are gifts from their well-to-do families.

On the other hand, there are a lot of youths who want to be considered jailones because of the privilege of wealth, power and socioeconomic influence the word and lifestyle implies.

Of course you won’t only find jailones, or people who aspire to be jailones, in La Paz. The word is used in countries such as Colombia, Chile and other parts of Bolivia, and the concept certainly has its equal in many places around the world.

In La Paz, a stereotypical jailon is always in fashion, trendy or chic; this means dressing in clothes by designers like Ricky Sarkany, Kosiuko, and Zara or following hipster trends with a casual three-day-old beard for guys and messed up hair for girls. It means having the newest gadgets on the technology market; like the latest iPhone, or the ability to dine at expensive restaurants like la Suisse or Jardín de Asia for even small occasions, like a one-month anniversary with your girlfriend. The lifestyle is geared around a feeling of exclusivity, which includes getting into the VIP area of nightclubs such as Forum, and is part of a search for acceptance that is as desperate as it is genuine.

My real interest in this topic lies in the fact that the most important part of jailón culture involves a certain adoption of the values and even the traditions of countries such as the United States and Europe in general (which for the record, is something even I find hard to escape). For example, jailones may celebrate Halloween more than they follow the Bolivian tradition of Todos Santos, and celebrate Saint Patrick’s Day more than the festivity of Aymara New Year.

Another example is how, over the past few weeks, I´ve seen my Facebook become jampacked with friends doing #theicebucketchallenge without understanding the cause behind it - they are simply drawn to a fad from abroad.

I am not saying that being influenced by other cultures is bad, or that people should be criticised simply for being born into a privileged family. But some aspects of jailón culture make me question how having access to everything that globalisation entails is influencing Bolivian culture in a much broader way.

All this external information, and the need to obtain it in order to be part of a society that is obsessed with accumulating as many goods and services as possible (and where having money is of utmost importance), means young people find themselves inevitably alienated from their original cultural identity. It´s happening more so in this generation than ever before, and it leads me to think that this phenomenon is not exclusive to Bolivia, but forms part of worldwide trend ... don´t you think?