It’s Not Always a Winning Game 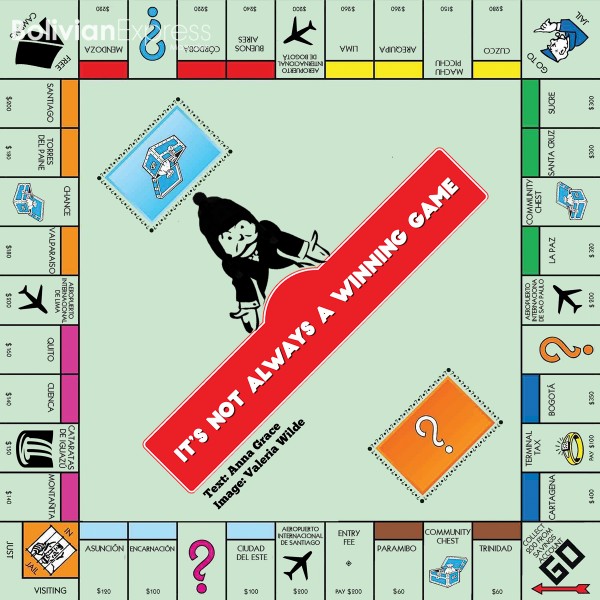 Journeys of a Restless Traveller in South America

An eventful journey, a nomadic paradise, a transient hell – travelling is many things. But one thing remains certain: the traveller is always on the move.

It’s part of the game, and a game for many it becomes. Imagine the great continent of South America as a Monopoly board. The aim is to collect the properties – or, in this case, countries – of greatest value.

The start of the board would see the not-so-oft visited countries of Suriname and Paraguay, widely said to be void of ‘wow’ factors. The safe bets, those invested in by many and bound to pay off, would be the backpacker favourites of Peru and Argentina.

The big hitter comes in the form of Colombia. On the rise, famed for beautiful coastlines and even more beautiful people, those who fail to add this to their collection are definitely missing out.

And Bolivia? Underestimated by some, most of the country is largely ignored, but it boasts a variety of backpacker must-do attractions. Worth a trip, some may say, but just a trip.

Hang around longer in any of these countries, though, and an attachment will be formed. Letting go of this attachment is the complicated part, as I found out…

The bluish tinge of a fiery newborn sun rising above the otherwordly salt flats; the composed reflection of a more mature blaze shining in the crystal waters of Lake Titicaca; the golden lights of a city asleep twinkling below the towering cable cars of La Paz; an aesthetic heaven. Bolivia has gifted me with sights that will stay with me for years, and memories that will last for significantly longer.

I set down roots. Yet feeling settled, finding a routine and building a normal life of sorts is not how you play this game. It was time to move on, to continue playing. After all, I never was one for losing. My next stop: Colombia. I knew Colombia was a strong contender in the running for South America's ‘best’ country, but I couldn't help but feel skeptical as to how it would compare to the country I was regretfully leaving. Or if it would compare at all.

Colombia didn't compare. After all, how could two such unique countries ever hope to do so? I showcased my lack of rhythm surrounded by passionate, whirling figures in a lively salsa bar in Cali, wandered between waxy palms on the green slopes near Salento in the coffee region and stumbled from tropical jungle onto golden sands and into the Caribbean sea in Tayrona National Park. Safe to say, my regret dissipated.

In the search for comparison lay my error.  Why did I feel a need to determine a ‘favourite’? As if countries were horses jostling for the lead at the Grand National, football teams competing for top of the table or, of course, properties to collect on a Monopoly board. I concluded that life isn't a series of comparisons, and that difference doesn't automatically qualify for better or worse.

After a well-welcomed return to Bolivia, the time approaches for me to say my renewed goodbyes to this country, a place that has been so kind to me, in which I have learnt so much and have regretted so little. What will stay with me most are the intangible impressions, the arbitrary encounters and the vivid sense of culture. Such non-concrete things, I have discovered, render comparison utterly futile.

I'm glad I didn't just pass through, and I know deep down that my despedida will be more of a hasta luego. ‘Competitive’ travellers may view this as time wasted. After all, there are more renowned properties to collect. At this rate, my collection may well remain small, but to hell with winning—I’m happy with my lot. In fact, I know I am not losing at all.