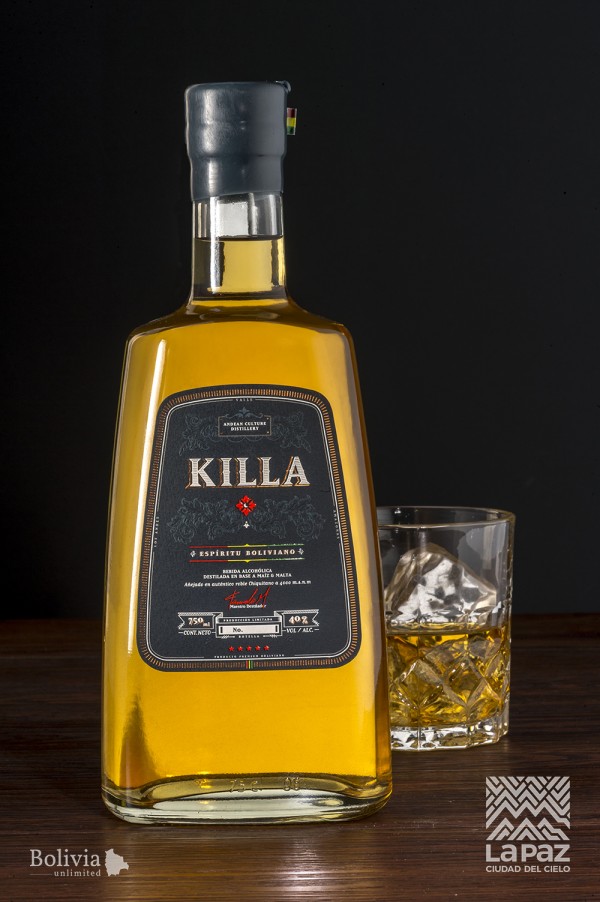 The Andean Culture Distillery adds to an oaky offering

Two years after its debut in their Bolivian liquor market, Andean Culture Distillery co-owners Fernando Marin and Felipe Gonzales-Quint talk to Bolivian Express about spearheading one of South America’s few whiskey distilleries – particularly why it was that whiskey, of all spirits, had caught their eye and imagination.

‘Given the definition of whiskey as a grain distillate that may or may not be aged,’ Marin said, ‘and given the richness and variety of grains available to us that have never before been used in whiskey distillation, we saw an opportunity.’

Living amidst the Andean mountain range with access to such a broad assortment of grains indigenous to the region, Marin and his partner were able to create something never before seen in Bolivia, let alone South America, that not only added another flavor to the Bolivian palate, but that was also simultaneously able to show off the vibrancy of Andean culture. The co-directors hope to challenge the notion that ‘West is best’ by introducing new whiskey products into the market that contrast with the ever-popular Scotch, Irish and bourbon whiskeys.

‘Given the richness and variety of grains available to us that have never before been used in whiskey distillation, we saw an opportunity.’

The creators of this Bolivian whiskey feel that they are able to offer something different. As well as providing the classic ingredients of corn, rye and wheat, the Andean landscape also offers quinoa, cañahua and amaranth, therefore creating a new experience in whiskey distillation. In addition to this innovative approach to the process, Marin and Gonzalez-Quint have made the decision to age their new whiskey using oak harvested from the eastern Santa Cruz region of Chiquitania. ‘We’re able to get a different profile because of our Chiquitania oak, as it tastes so different from French oak or American oak,’ Marin explained. ‘We’re able to create another character, another whiskey.’

The Andean Culture Distillery has encountered great success over the past two years selling its original, crystalline, non-aged Killa Andean Moonshine, a liquor inspired by the period of probation in 1930s America when amateur distillation was booming. This smooth liquor has since been making a name for itself in the bars and restaurants of La Paz, leading it to be lauded by many international master whiskey distillers.

Despite this success, however, the journey hasn’t all been plain sailing. Towards the end of 2017, the two partners found themselves in deep water thanks to a stockpiling issue that left them almost bankrupt. Initially, the business started from nothing and, over the months that it took to get going, simply grew and grew in success, scale and stock. By this point, the Andean Culture Distillery was storing its ingredients by the tonne on a large lot in a factory, which in a sudden turn of events became contaminated by one faulty hose. The partners were left with nothing, having lost all of their ingredients and a large portion of their profits. Over the following months, however, the business built its way back and was soon back on its feet once more, doing better than ever.

Discussing the setback, Marin said: ‘You’ll always encounter obstacles in life, but your successes simply depend on how you receive the blow. We’ve managed to come out winning, because the lessons we’ve learned from facing this obstacle have become our motivation.’

It seems this motivation has been put to good use as this month the Andean Culture Distillery will be releasing a new aged whiskey. This product will take on a darker, earthier colour than the popular Killa Andean Moonshine thanks to the ageing period it’s gone through resting in the casks made of Chiquitania wood. This new product was inspired by the South American fermented chicha beer of the Andes, which is derived from either maize or amaranth. Chicha is of pertinent social significance in Bolivia and South America, as a beverage that brings people in celebration at feasts and social gatherings and constitutes part of their social identity.

The new aged whiskey will take on a darker, earthier colour thanks to the ageing period it’s gone through resting in casks made of chiquitania wood.

Discussing chicha, Marin explained, ‘It is a corn-based beer that is, bit by bit, dying out and disappearing as a custom and a tradition.’ In order to sustain the popularity of this indigenous beverage, the owners of the Andean Culture Distillery have attempted to reinvent it in the form of a distilled whiskey.

In terms of the company’s aims and aspirations, it is clear that the Andean Culture Distillery has a promising future. Marin hopes to fulfil the company’s objective of creating a business that not only benefits its consumers but also its regional producers by collaborating with local businesses. The Andean Culture Distillery’s current success and growth is due, in part, to its collaboration with Innovación de Bebidas – the company behind the Bolivian spirit 1825 Vodka – which lets them use the its German-made distillery equipment.

Marin says he enjoys experimenting with the various flavours indigenous to and so indicative of Bolivia and South America, and potential collaborations with local Bolivian businesses to create products such as whiskey-flavoured chocolate and coffee beans aged in oak.

The impact that the Andean Culture Distillery is having on La Paz and Bolivia is not just that of commercial success, but also one of strong social significance as the company strives to develop a network of successful independent local businesses, from which we hope to see the whole of Bolivia benefit.