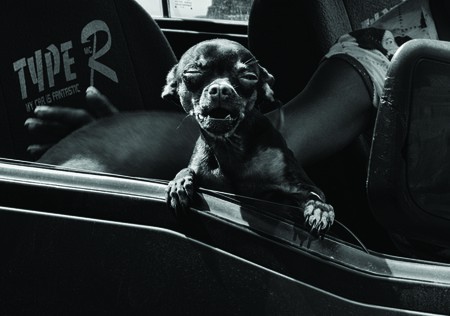 Leashless, a Scottish terrier takes itself for a measured stroll down the avenida San Pedro. Strays are a reality in any major city, but in La Paz loose dogs are often not the tramps they appear to be. They may well have a lady tending to them at home, who lets them out to roam in the morning, and welcomes them back to a warm spaghetti Bolognese at night. Between the cities of El Alto and La Paz, there are 300,000 dogs on the street. Half of these are ‘semi-strays’ domesticated dogs posing as tramps, scavenging through bins alongside the genuine hobos. If you are used to a domesticated ‘pet and owner’ type of relationship between man and dog you may ask, what is the point of owning a dog if it is rarely seen?

The freedom dogs enjoy here in Bolivia can be understood as a more ancient and respectful alliance: dogs are free to do as they please and owners enjoy their company on occasion. Nevertheless, the reason why it occurs is not a high-minded respect for dogs’ roaming rights, but financial need and cultural norms. The majority of dog owners who let their animals run free possess animals for security reasons; they may not desire the company of a pet, but feel the need of extra protection. However, few of these owners can afford to keep a dog, and letting the dog roam the street and feed off the rubbish it finds provides a solution to this problem. In other cases, immigrants from the countryside, where it is common practice to let a pet roam free, continue to do so when they migrate to the city, failing to realize that while it is harmless to do so in the countryside, in the city it creates problems.

Susana Carpio Ormachea, president of Animales SOS has pinpointed the issues that free roaming dogs create: overpopulation, rabies, and dog bites are the most serious. Furthermore, unpleasant mess in the streets and an ‘irresponsible’ attitude towards animals are listed as the less pressing concerns. The City Kennel in La Paz receives 25 calls a day reporting dog bites. She informs me that in Bolivia 80% of the people who are attacked by dogs are children, and 90% of these attacks are to the face, often leaving the victims with scars. Furthermore, rabies is still prevalent in Bo-livia; other countries have managed to eradicate the disease, but here millions of bolivianos are spent each year on distributing free vaccinations and treatments. Stray dogs, undeniably, create health and economic problems. ‘Still the number of dogs continues to grow, and the number of people dying from rabies continues to grow, because a lot of dogs on the street have rabies, and you can’t blame anyone when you don’t know who the owners are’. This seems to be the underlying problem: owning a dog as a ‘semistray’ means that noone is given full responsibility for the animal, and therefore nobody can be held accountable for the trouble that they create. In other countries, when a dog mauls a baby, the owner is charged, and this incentivises people to control their pets; in Bolivia this is not the case, and so there is no example to discourage further incidents.

Stray and semistray dogs are a problem that need to be solved; the number of strays is increasing exponentially, and with it the gravity of the problems they create. Carpio Ormachea sustains that the method currently in use to diminish the number of strays is not successful. ‘At the moment they take the dogs off the street and they kill them. This doesn’t solve the problem. According to the OMS (World Health Organization), if you successfully get rid of 400 dogs in a city where there are 500 dogs, because you haven’t got rid of the rubbish in the city of which they live off, this 100 have more success in feeding themselves. This means that they reproduce more. So you’re achieving the exact opposite of the desired result when you only capture and kill them.’ Furthermore, regardless of the fact that this tactic does not seem to work, it is also of questionable ethic. Until recently, homeless people, the majority of whom were drug addicts or alcoholics, were offered a sum of money to strangle or hang stray dogs that were captured. Currently the dogs are either poisoned, electrocuted, gassed, or shot. Neither of these ‘solutions’ present an appealing scenario. Animales SOS are trying to change this.

They have suggested sterilization as an alternative, and this is now being taken seriously as a more humane and effective solution. The organisation pay half the price towards the surgery for families with low incomes wishing to sterilise their dog, in hope that it will encourage more pet owners to take this step. Other methods to alleviate the problem are also in progress, one of these being a system of obligatory registration of all dogs. 'For me, this means a tattoo in the ear. Because Bolivia is a third world country, and we have very few economic resources, a large proportion of the country is poor. The people who are the poorest tend to have the most animals, often in very bad conditions. So to put a chip in the dogs for example, would be difficult'. She argues that the registration needs to be free and must not be centralised, rather it needs to be organised by city zones. Anyone who has a dog which has not been registered would have to pay a fine of 5000 bolivianos. 'Having a tattoo on the ear means that once the dog is registered, people can't abandon it, because they will have to pay a large fine. You can leave it in an animal shelter but not on the street. If you live in a dangerous area and you need dogs for protection that's fine, but you'll have to make sure they're registered and well looked after.' This tactic will hopefully awaken a sense of responsibility in the owner of a dog - knowing that they will be identified as the owner and subsequently punished if their dog is found biting someone, they will be reluctant to let that dog out onto the street to do as it likes.

If Animales SOS is successful, Bolivia’s liberal and unique way of enjoying canine company might be coming to an end. But given the widespread problems they have caused, perhaps that’s not such a bad thing. Of course if I were a dog, I’d rather roam free than be cooped up. But then, if I had to choose between the risk of being herded up for electrocution, or being kept indoors with a tattoo, there’s little doubt which one I’d pick. The action proposed by Animales SOS could be a solution for all citizens of La Paz, two and four legged alike.