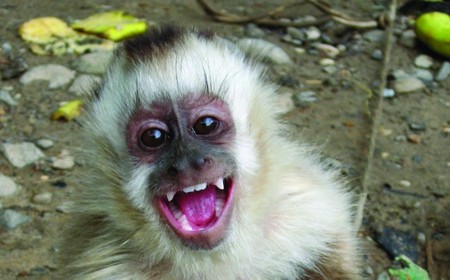 Profile: A safe haven for the animal victims of abusive situations and illegal wildlife trade. Rescued animals come here for rehabilitation and hopefully, an eventual release back into the wild. The refuge’s name is drawn from Bolivia’s three major languages: Inti in Quechua means Sun; Wara in Aymara means Stars; Yassi in Guarani means Moon.

History: Founded in 1992 by Juan Carlos Antezana, a role model in conservation for many underprivileged Bolivian children. Aspiring to help poor children from the shantytowns around La Paz, Juan Carlos started out mentoring them, and taking them on hiking trips in the jungles. On one such hike, they came across a burned patch of forest and a starving caged bird, and Inti Wara Yassi was born. As word about this refuge spread, a steady stream of confiscated and sick animals started to arrive, and it began to grow into a full fledged sanctuary for species as diverse as birds, monkeys and wildcats.

Through the Eyes of A Volunteer

I wake up to the alarm at 5:30am under the mosquito net and listen to the steady pounding of rain on the thin metal roof. The tropical rain that began at sunset the previous evening is still holding steady. At sunrise it will be replaced by a humid, sticky heat that will intensify through the day as it has for the two weeks that I have spent volunteering here, at this small animal refuge bordering the rain forest in central Bolivia. My work day at the refuge's Monkey Quarantine begins at 7am, and I am usually early. After a quick breakfast at the refuge's little vegetarian cafe, I hurry in to begin work.

I first check on the small monkeys who spend nights indoors. Cici, an orphan Capuchin, is the youngest, barely few months old. In the wild she would still be with her mother. I worry every morning that something dreadful would have happened to her overnight. She and her companions begin to chatter loudly when they see me. I bring them to the shaded area outdoors to join the thirty-five other monkeys who live there in bigger enclosures, all waiting out their quarantine period. Some are violent, and have behavioral problems from extended abuse. Others are young and playful, and have a better chance of being free again.

When I open her cage, baby Cici quickly clambers over my arm and onto my shoulder, her tail wrapping around my neck. She has had diarrhea for several days now, and seems extra tired today. At the small veterinary office, Cici looks tiny and vulnerable on the examination table, as she dips her entire head into her cup of tonic, lapping up the medicine. Inti Wara Yassi lies by the rain forest out-side the sleepy little town of Villa Tunari in Bolivia's central Chapare region. The closest cities are 170km away: Santa Cruz to the east, and Cochabamba to the west. The refuge is run by a few Bolivian employees and volunteers from the world over, who commit to work a minimum of 2 weeks, and pay $90-110 for the opportunity.

Breakfast is a frantic chore, where we work as fast as possible, trying to simultaneously feed forty hungry chattering monkeys. Later, as they play under the shade of avocado trees, I sweep the floor while other volunteers wash soiled monkey-blankets and do the dishes. Cici clings to my arm and tries to catch the water from my hose as I clean the cages. The morning passes quickly in a buzz of activity.

The post lunch respite is my favorite time of day, when I can watch the monkeys play. I can easily tell them apart, for each monkey has its own unique personality.

Arturo, a clever little Capuchin, likes to undo his rope and run off to hide, waiting to be found each time. He lies on my lap this afternoon, watching a tortoise amble through the enclosure picking up scraps that the monkeys have dropped.

Matensita, a beautiful Capuchin, lives in a large cage with her mate. She was kept tethered outside a house and abused for six years. As a result, she is very aggressive, and attacks everyone. She can never be free.

Miel is the prettiest little Capuchin, with golden fur and soft brown eyes. She quickly learns to undo my shoe laces when I am not looking. She also loves to climb onto people's heads, grabbing their hair with her tiny fingers.

And then there is Bibi, a quiet Spider monkey who likes to stay hidden. She is wary of people, but delighted me with a tight hug the first time I saw her. Bibi was rescued from sexual abuse at the hands of men. When I try to hug her back, she grows uncomfortable and slinks away each time.

The tiny squirrel monkeys are gentle and playful, each small enough to fit in my palm. There are several in the refuge, but a large band of wild squirrel monkeys raids the kitchen constantly bringing endless amusement to the volunteers.
The refuge houses about 300 monkeys of seven different species (spider, capuchin, squirrel, nocturnal, titi, howler and tamarin), birds, ocelots, pumas and a jaguar, as well as coatis, turtles, and snakes. Since the refuge is not funded by the Bolivian government or any other agency, it is usually strapped for funds and supplies. Dinner for the monkeys is at 6pm. Pandemonium reigns once again, as we hand out chopped vegetables and fruits. Dinner is followed by bed time, and we take the animals back into their enclosures one by one.

After one last stroll through the quarantine area to make sure the tarps above the enclosures are secure, I bring in the smallest monkeys. This is always the hardest time for me, when I pry Cici's tiny arms from around my neck and put her into her laundry basket for the night. As soon as she gets her blanket though, she cuddles with it and settles down.

The cafe is deserted. Most of the volunteers have left already. I get myself a cup of tea and sit down at a bench by the road to watch the rain clouds gather in the sky. There is a moist stillness in the air, an anticipation for the approaching rain.

Large trucks still thunder down the highway that runs outside the refuge, as they have been doing all day long. They are mostly filled to the brim with timber from the disappearing forests.

As refuges like Inti Wara Yassi struggle to accommodate orphan monkeys and wildcats for rehabilitation, they are fighting a losing battle. Wildlife habitat is disappearing at an alarming rate, and the resulting human-wildlife conflict is creating victims faster than refuges can take them in. Innocent animals like baby Cici are left clutching at a blanket for comfort when they should be with their mother in the wild.

There surely must be something more that I can do! I finish my tea, and ponder this question on my walk back to the hostel, as the first drops of rain start to fall.