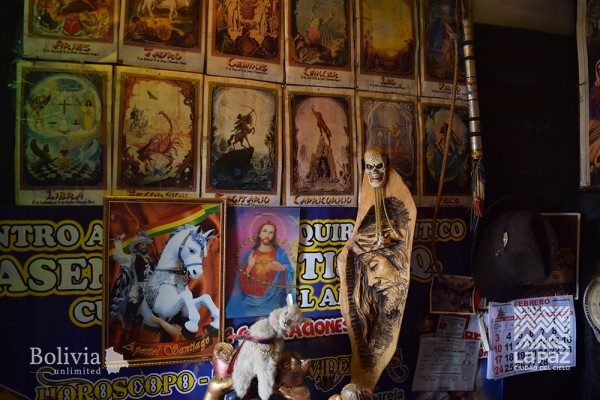 The work of heeding the call of Pachamama

At the edge of the market in El Alto, beyond the never-ending stalls that sell everything you could possibly imagine, is one of the strangest local oddities. To the common tourist, the curious practice of witchcraft and spiritual healing in La Paz is limited to the mercado de las brujas in the centre of the city. But if the tourist asks further, she’ll hear the whispers about ‘where the real witches reside,’ the brujas of El Alto.

Mounted high above the city of La Paz, is the place where those whispers will take you: a line of small green buildings flanked by stone frogs on the sidewalk and small ceremonial fires burning for the Andean deity Pachamama. Inside the walls, are the men and women known as yatiris.

One woman, named Angela (she didn’t want to disclose her full name), sits restfully in a small room filled with Catholic effigies and bright fabrics. Inside her cluttered, but colourful space, she sits in front of a small table displaying a selection of coca leaves, playing cards, tobacco and what appears to be alcohol. With a warm smile she invites me to sit on a low wooden bench and agrees to answer my question about the mysteries of her work.

As I had suspected, one should be wary of using the term brujería or ‘witchcraft’ in reference to Angela’s work, as it has become conflated with spiritual and healing work. At the start of our conversation, Angela clarified the derogatory nature of the label, explaining that a bruja works with el Tío or the devil, to bring about wishes associated with death. ‘I am a yatiri, and spiritual worker,’ Angela asserts, ‘I work with the spirits of Andean cosmovisión in order to bring fortune and well-being to those who seek it.’

‘I am a yatiri, and spiritual worker. I work with the spirits of the Andean cosmovisión.’

Becoming a yatiri is considered a birthright that is conditional on three factors: being a twin, having been born with six toes or having been struck by thunder. In Angela’s case, she is caída de rayo.

‘When I was five,’ she says, ‘I lived with my mother on the outskirts of El Alto. We were pastoral herders. One day, it was raining heavily and one of our donkeys escaped, so I went to look for it and thunder struck me.’

If a person survives such an incident, and is able to stand up without help, it is said they are granted the gift of becoming a yatiri. Since that day, Angela has experienced the strangest of visions and dreams, called cosmically by the Andean goddess of the Earth, Pachamama. ‘One is who called to the spiritual path by Pachamama, has no choice but to dedicate their life to this work,’ she says. ‘I tried to go to university, but I kept being brought back to this career path. The life of a yatiri is inevitable.’

Angela speaks about her spiritual work as a doctor or a lawyer would speak of his or her profession. She earns living exclusively by heeding her cosmic calling from Pachamama. Money is integral to yatiri rituals as an offering to the deity. Without it, Pachamama will eat the flesh and soul of the yatiri. Since the spiritual worker lends herself as a medium, she is allowed to profit from the offerings. Although ceremonies and readings require a financial contribution. the price depends on the discretion of the customer. ‘I cannot put a price on my work,’ Angela explains, ‘you must pay according to your faith and the magnitude of the ritual.’

‘I cannot put a price on my work. You must pay according to your faith and the magnitude of the ritual.’

Angela and other yatiris who work in the row of square green buildings now belong to an association of spiritual workers. They ask the government for idleland and divide it among them. The yatiris pay taxes and are the rightful owners of their property. ‘The current government has really helped my practice,’ Angela says. ‘I feel there is more support these days. I was even invited by Evo Morales to perform a ritual for him.’ A large and off-centred portrait of Morales hangs above Angela’s head, like an iconic saint.

Her spiritual work is rooted in Aymara customs and beliefs, in which the health and wellbeing of an individual relies upon a medium’s communication with the spirits. Far from being a relic of the past, this Aymara heritage has been strengthened and reconstituted through the government of Morales, which endorses this vitally Bolivian practice. ‘Pachamama calls, and you must listen.’ Angela says. ‘No one can stop the work that we do, because [Pachamama] exists always and within everything.’