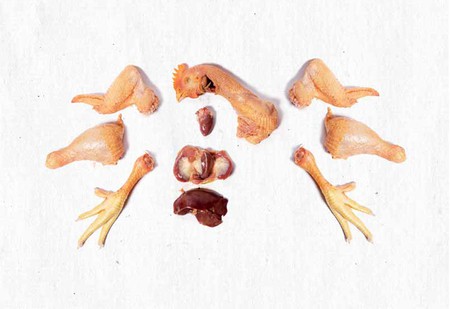 Doña Wilma has been selling deep-fried chicken necks with potatoes for five years in Villa Pabón. This job has allowed her to maintain her family and become very popular in the area. Today she has a kiosk where she also offers other tasty snacks such as the famous salchipapas. But undoubtedly the most popular are the cuellitos which only cost Bs. 2.50.
The sale of cuellitos began when pollo al spiedo (spitroast chicken) was very expensive and the current fast-food chains didn’t exist. Faced with the impossibility of paying for a chicken portion, many people started to buy cuellitos to treat themselves. Cuellitos were sold for Bs.10 a dozen and Bs.1 each. Now this activity has mainly moved to the city’s outskirts to the traditional micro-snack, where salchipapas, hot dogs, and hamburgers are on sale. Now cuellitos have been included as one of the main products on offer.

Mercado Uruguay is one of the cheapest and most popular markets in La Paz. It offers a wide, and very distinctive, variety of products. In its laberynthine passageways you can find everything from live animals such as chicks, dried grains, cow and chicken innards, charque, vegetables, to cooked food—the whole food chain. Given its location between Max Paredes and Buenos Aires avenues, the diners in this market are generally street peddlers, lustrabotas, aparapitas and destitute people, who for Bs.3 can buy a plate of food such as peanut soup or chairo with innards and chicken feet. Plus their nectar refresquito (boiled fruit juice).

Although there isn’t a specific place where fried chicken liver is sold, this dish is mainly consumed by families at home. It is popular especially in the department of Tarija. Its consumption is also encouraged by doctors and family members to combat anaemia, and to aid the nutrition of pregnant women. Doña Guadalupe Paco told us that she started eating chicken liver when she was 29 and expecting her third child and was diagnosed with anaemia and a high-risk pregnancy. Now, fried chicken liver is a habitual part of her family’s diet.