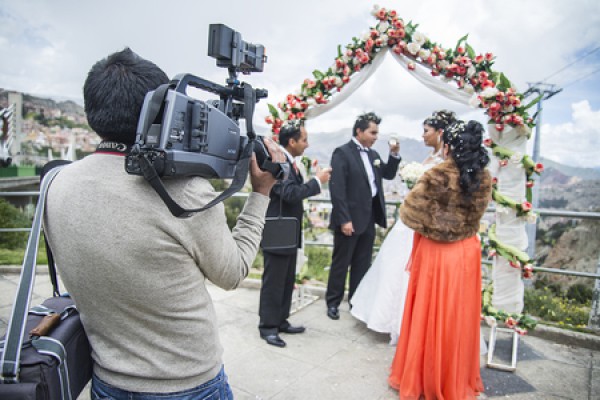 Cash-in-hand workers wield their political and economic power through organisation and entrepreneurialism.

In a dusty lay-by overlooking the sprawling city of La Paz, champagne is flowing on a bright Saturday morning. Clutching a glass in one hand and my notepad in the other, I weave my way through the boisterous crowd, past the blaring speakers and carefully avoiding the uncontrollable whizzing firecrackers. Eventually I find Bendita, who with a theatrical twirl of her cape turns to greet me, her wide smile accentuated by her heavy costume make up. Diminutive in stature but abundant in energy, Bendita is undoubtedly the life of this extraordinary outdoor party. Lavishing drinks and plates of food upon her guests and leading us in a conga-line dance over a bridge, her carnival spirit is infectious and compelling.

But don't let appearances deceive you. When she isn't celebrating Carnival, Bendita is an incredibly professional businesswoman, and this bridge her workplace.

Any other Saturday morning, if you were to walk along this bridge, you would find Bendita and her sisters, Paula and Giovanna, camera in hand, diligently photographing newly married couples. For years, newlyweds on the way to their wedding receptions have been driving over the city's tres puentes for good luck, stopping in this non-descript lay-by to admire the astounding views of the city.

Four years ago, Bendita realised this wedding tradition opened up a gap in the market for an aspiring photographer. Pooling their money to buy a camera, the enterprising group of sisters set up shop on this bridge, offering newlyweds photography services and champagne, not to mention service with a smile.

While this bridge-side photography collective is a fascinating example of the country's booming entrepreneurship, it really is just the tip of the iceberg of Bolivia's informal market. According to the World Bank, a staggering 70% of the Bolivian population are employed in the informal sector, meaning that they run their own small businesses, often working erratic hours and earning unpredictable cash-in-hand salaries.
Initially, the tumultuous morning on the bridge served only to encourage my preconceived notions of the informal economy as erratic and precarious. But I soon came to realise that the apparent chaos and turbulence of La Paz and El Alto’s innumerable street vendors in fact belies strict organisation and a fiercely entrepreneurial spirit. Scratching the surface of this flurry of activity reveals that many of these workers are also organized into unions and associations that defend their rights.

Strolling through Sopocachi market, I meet an elderly Bolivian woman sweeping the floor, towered over by an enormous pile of vegetables. Her name is Teresa Flores, and flashing a warm grin, she happily tells me "my grandmother founded the market 85 years ago. My mother worked here selling fruit and now I'm here with my vegetables". Whilst her stall here is likely lucrative , her job is not without its hardships. "The work is very demanding. We are here at the market at 7 each day and won't finish until 8 at night, and I can't take holidays because the vegetables will spoil. And the government won't give us pensions. We get nothing from them."

Her sentiments are echoed amongst street workers throughout the city. As I make my way through downtown La Paz, stopping to speak to various vendors, I accumulate a long list of grievances. On the sunlit streets of Plaza Abaroa, I meet Ruben, a softly spoken young man, and the proud owner of a bright blue cart from which he sells Brazil nuts. I learn that Ruben is not a La Paz native, and that he transports his produce to the city from his hometown of Riberalta, some 650 kilometres away. It’s that 4-day journey, and his nomadic lifestyle, which Ruben finds most gruelling.
Continuing to traverse the city on foot, I encounter Mario Aquese on a shady corner of Sopocachi - the same corner where he has worked as a plumber for 35 years. "It's not an easy job" he tells me, folding his newspaper under his arm. "There are people who treat us badly. Our work is sometimes discredited."

After listening to the many worries of these street vendors, I find myself asking why so many Bolivians enter the informal market. The answer is certainly complex. While Bolivia has experienced a period of economic growth over the last decade, the country remains one of the poorest in South America, with an approximate 59% of the population living in conditions of poverty. From this perspective, it is perhaps easy to understand the allure of cash-in-hand work, as it not only provides easy entry employment opportunities for the poor, but also enables workers to employ skills gained outside of a formal education.

Power of the People

Granted, the majority of Bolivians enter the informal market out of necessity and a lack of alternative employment opportunities. But there are also powerful organisations and large sums of money at play.

The street workers of Bolivia unionise in order to demand legal protection. The largest union in La Paz is formed of some 1800 clothes vendors, whilst hundreds of smaller unions coexist, each striving to improve the working and living conditions of its members. Some associations are even attempting to combat the lack of state benefits available to street workers by pooling money when a union member falls unwell, so as to cover their medical costs. The vacuum created by the absence of governmental protection is to some extent being filled by these ever expanding unions.

Perhaps the most striking example of union success here in La Paz is that of the child workers union, UNATSBO. Last year, after relentless campaigning, the minimum working age was reduced from 14 to just 10. While the prospect of child labour being legalised may horrify western sensibilities, for Bolivia's 850,000 child workers, this law aims to provide them with legal protection and respect.
According to Jaime Villalobos, the director of Hormigón Armado, an organisation working to improve the lives of child workers, this law "accepts the reality that children in Bolivia have to work and will continue to work. Criminalising child labour would only force kids into more clandestine activities, leaving them vulnerable to exploitation."
We are witnessing a new phase in Bolivia's history of organised labour. The unparalleled success of the UNATSBO union reminds us of the powerful potential of Bolivia's informal workers as a united social and political force.

From unionisation to blossoming entrepreneurship, informal labourers continue to change the face of working Bolivia.