In the cult of comics 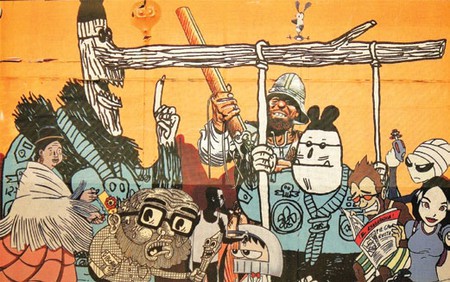 As a fourteen-year-old girl, my contact with comics was restricted to the hours I spent in comic book stores, waiting for my friends to finish dithering over whether or not to buy the latest issue of X-Men. Comics appeared to be the province of teenage boys, and seemingly beyond the realm of my understanding. The characters on the pages were familiar to me from TV cartoons, but comics themselves were an enigma. However, over the years I have gradually been integrated into the comic tribe, with its occasionally secretive and peculiar quirks and traditions unfamiliar to those outside of it.

The city of La Paz exudes an artistic spirit. Unlike many cities where art appears constrained to galleries and museums, in La Paz it spills out, smothering the streets, walls and buildings. How much of this art is formal or informal is unclear to the traveller’s eye, as graffiti merge into murals. To an extent it doesn’t really matter—here, art can be anywhere. And it was whilst I was admiring the streets of La Paz that I found C+C Centro del Cómic, just up from Plaza Avaroa. My interest was piqued—how strong is the comic book culture here in La Paz? Initially I assumed the Centre was simply a comic book shop, but to my surprise it was in fact a comic book library. I had never encountered a library dedicated to comic books before; the closest back home in the UK are institutional historical archives. This unusual set-up intrigued me— not only the puzzle of a comic book library existing in itself, but also why here in La Paz?
One of the main reasons for its existence is the Fundación Simon I. Patiño, an institution named after the ‘Andean Rockefeller’ who, at the time of his death in 1947, was one of the richest men in
the world. The comic book library is part of the foundation’s cultural programme and occupies the ground floor of Espacio Simon I. Patiño—the foundation’s base in La Paz.
The Centro has been providing a free space where people can come and enjoy comics for the past 11 years. As a library, it helps circulate limited material around the maximum amount of people, instead of selling them for a profit. Readers I spoke to identified the centre as pretty much the only place they could get good comics—shops either had limited stock or the prices were too high. In times of economic uncertainty, it is also an important cultural refuge for those who would otherwise be unable to afford to enjoy comics. Friday afternoons are the centre’s busiest hour as people—young and old, male and female - visit on the way back from school and work. For an annual subscription fee of only Bs. 100 (around $15) you can borrow two comics for two weeks. And there’s a lot to choose from.

As well as the traditional fan bases for superheroes and manga, there is a strong interest in domestic talent with many fans favouring Bolivian comics. One reader said they preferred these comics as they were ‘more to do with them’—ideas of a shared culture, shared geography and shared experience building a shared identity perhaps. Or maybe they just prefer their drawings.
The centre does not only attract readers but also artists – aspiring, published and professional alike. Two schoolgirls had visited the centre to practise their skills using drawing books and magazines at the centre, with aspirations to maybe draw their own comics one day.
I spoke to Francisco Leñero, responsible for the running of C+C, about the success of the centre and what he felt about the comic culture of La Paz. He admits the Bolivian comic market is small, but explains there remains a sufficient, stable community to sustain it. It also provides an interesting situation for artists –the reduced market may mean it is hard for artists to make a living from their work but it also allows a greater level of experimentation. However, a lack of market pressure, he believes, can reduce the pressure to create higher quality work.
The struggle for recognition as ‘true art’ and ‘true literature’ for comic books is global. Francisco believes that there is increasing respect for comics as an art form here in Bolivia—libraries in wider
La Paz are now housing comics within their collections and no longer just in the children’s sections—the likes of Marjane Satrapi and Joe Sacco, for example, have gained recognition as important writers in themselves both for their art and the difficult issues they confront.
Another increasingly popular way people are interacting with comics is through the Internet. A quick Google search reveals fan sites and pages, Facebook groups and Blogspots for Bolivian fans of comics. The rise of the online comic and illegal downloading may be changing the scene, but it is Francisco’s belief that the internet does not pose a threat to the centre with the majority of
people who visit also reading comics online. It appears that printed comics, and a physical space where people can read them, is still important.
There is certainly a thriving comic book culture in La Paz, even if it is only a modest one. Many different groups and places sustain it, from stores to the library; from fanáticos to aficionados and artists. This multi-layered community is interdependent, and the lines between reader, writer and artist can be easily transcended.
The community itself is nicely summedup by Mauricio Salazar Jemio, an aspiring artist, who had this to say about La Paz’s artistic tribal community: ‘There is gonna be always somebody that supports you and can see what you do and help you with the publication of your work or the commercialization of it. The tribes are small and the comic book artist is nowadays everywhere, and they are part of the cultural community of La Paz where you meet and share ideas with
all kinds of artists from musicians to graphic designers, [together] forming part of what is the comic culture in Bolivia.