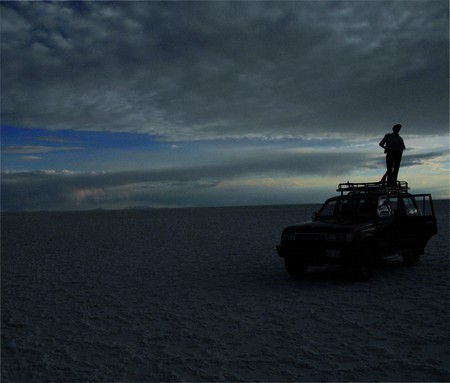 An Interview with Ricardo Catro Pena, a Bolivian Tour guide since 1993. Ricardo has been a freelance tour guide for his entire adult life and has recently set up his own tour company “Imperial Bolivian Travel” which he runs by himself.

Ricardo has lived in La Paz all his life. Although his parents wanted him to be a doctor or manager because they were not very well off, Ricardo felt he was chosen for a different path. Whilst he was walking along the street one night, three Ecuadorians accosted him to ask where the main square was. He told them the directions but they then asked if he could take them there. This was his signal from above that he was going to be a tour guide. He also learned something else he would remember for this entire career: that Latin Americans don’t pay.

Nerve wracking. Ricardo had approached a travel agency to enlist himself as a freelance tour guide. For quite a while there were no calls, until one night (or morning - it was 3am) he got a call from the agency saying a British couple wanted a tour of Copacabana. Ricardo was fine with this, except for two things - he didn’t think he spoke English and he didn’t know anything about Copacabana.

What did Ricardo do?

Went home from the discoteque where he received the call, slept four hours and went to Copacabana. There he introduced himself to a local tour guide and asked her to fill him in on the details of the area. Charitably she gave him a three hour ‘guide to being a tour guide’. When the English couple arrived Ricardo knew the area... but his confidence speaking English was so low that his sentences ended up something like: “This.......is.....road......go...... Copacabana”. Later Ricardo enrolled in the “Alliance Francaise” where he learned French, and took a course on how to be a tour guide.

Tips from Ricardo: the technical side of being a tour guide.

For Ricardo, his tours are set apart from the rest for his attention to detail. Personally, he enjoys the tour most if there are adventurous people on it. For him adventure is unplanned, improvised, always discovering new paths and routes. Here he offers his top tips for the aspiring tour guide:

• Get to know locals: Ricardo can get special treatment in hotels, clubs and restaurants because he knows people.

• Be willing to sacrifice your own personal comfort – just a couple of weeks before our interview Ricardo slept on the street in Copacabana because there was only enough room for his guests in the hotel. Luckily he was wearing Tanya (his jacket not his girlfriend).

• Make them feel secure: All Ricardo’s guests have the necessary safety information, and if there is ever a problem, tourists are always able to phone Ricky.

• Watch out for group dynamics: It’s not enough just to know a place or a distance; how long any tourist attraction takes will depend on whether you have two people in your group or twelve.

• Be selective: Know which sites to bring tourists to, and which to leave out. This is something they don’t teach you - you figure it out yourself, for example by sending three possible tours to travel agents and then seeing which one is most popular, or by talking with other tour guides.

• Get a good driver: they need to know where to stop and how long to stop for. There needs to be trust there too.

• Be Flexible: If a tourist signs up to a tour and has read Lonely Planet and seen all the basic stuff you are going to need to adapt, to change in a moment. The tourist is always the boss - you do whatever makes him or her happy

Americans – He likes their capitalist values: they know that you have to pay to get what you want. However, they do ask the stupidest questions: ‘How do you sleep?’ (in a bed), ‘do you study?’ – (he’s not *that* different). Also they always say ‘In America’ to mean the USA, forgetting that they ARE in America

French – they love adventure, never follow the road, and always enjoy what they do.

English –They are easy because he speaks the language, though Londoners can be pretty arrogant.

Russians – A very serious people. He respects them because they are educated, but too serious; they often don’t get his jokes (see icebreakers below). Tourists must be fun-loving.

Japanese – They are always taking photos. Agree to everything

Ricardo was trekking with New Zealanders in the Canyo de Balca when he heard a man with a Peruvian accent asking ‘Who are you?’. They were told they could not pass because they were gringos, whereupon Ricky shot back that as they were Peruvian they could hardly talk. Then they were suddenly surrounded by five armed men.

Ricky maintained that the most important things in this situation were their lives and passports. The thieves made off with everything else - money, cameras, mobiles. Then made Ricky and his group get down on the floor before scarpering. The two girls were crying. Afterwards they went to the embassy.

Whilst guiding six Japanese in Isla del Sol Ricky turned around and everyone had gone. 15 minutes later he found all six surrounding something, frantically taking photos. He presumed it was the natural spring nearby. It wasn’t. It was a pig. Japanese are crazy he reckons. Six years of university - now photos of pigs.

As a finishing touch, Ricardo likes to keep his tourists entertained with little anecdotes, stories and jokes. An idiosyncrasy of his own which he is happy to share is his habit for naming clothes. His jacket’s name is Tanya, though he can’t remember why. He also has a bag called Oscar (after its brand name), and Charlie and Stephen are his boots, named after two arrogant Australians who were forever proclaiming ‘in my country’, thinking they’re better.

Ricardo has also kept a book of happy testimonials from previous customers on his desk. A quick glance through reveals that he knows everyone and, interestingly, that he had helped a nine year old Bolivian living abroad reconnect with her culture.

Finally, a list of Ricky’s jokes and comments to keep his guests engaged.

And what does Ricky himself think about being a tourist? “I am a terrible tourist. I hate going to other countries - I can’t sleep, I want to come home. Of course being a bad tourist doesn’t mean I’m a bad tour guide. All the people I’ve met over the years ask me to visit. But I never will. I love Bolivia too much to leave”.