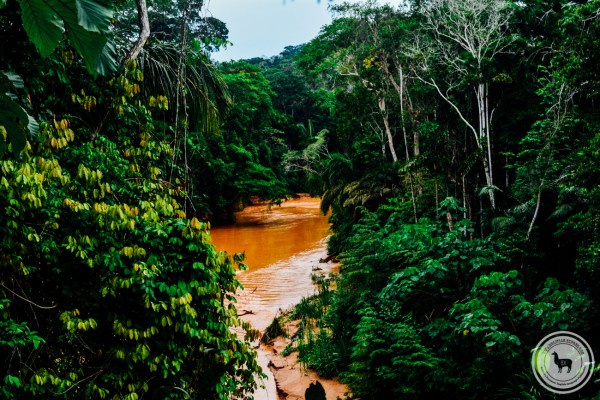 The journey from La Paz to the San José de Uchupiamonas community, in the heart of Madidi National Park, reinforces its ecological importance. I flew from El Alto at 7:30 in the morning and the terror of boarding a plane that could fit in my living room was alleviated the moment the Amazon began to sprawl beneath us. It was an experience in and of itself. Soon I would be on a boat making my way down those same rivers and estuaries.

As you take the boat from the town of Rurrenabaque into the jungle’s heart, macaws fly above, and the sound of the rainforest is draining. Madidi bridges the tropical Andes and the Amazon Basin, and has an altitudinal span of nearly 6000m. The sheer biodiversity of the park is undeniable and, for me, it’s become clear that it deserves the recognition and cultural significance that Identidad Madidi will bring it.

The most unprecedented findings are ten species of vertebrates that are new to science.

The expedition began in June 2015 and has already collected data at eleven sites, with plans to cover five more. The primary objective is to prove the previously suspected fact that Madidi is the world’s most biologically diverse protected area. This terminology is stressed by expedition leader, Robert Wallace, who notes that they are ‘not trying to prove that it is the most biologically diverse place in the world’, as that would require determining biodiversity by square meter or kilometre. The champion by that count is most likely somewhere in Ecuador or Colombia. Instead, what they are seeking to prove is that Madidi, as a singular national park, protects more species than any other on Earth. The hypothesis is becoming more definite as the expedition goes on, since the project has already doubled the expected number of new vertebrate species recorded on the exhibition, from 100 to 200. According to Wallace, ‘The altitudinal gradient is crucial. It is the reason for Madidi’s outstanding biodiversity.’

Madidi has been known by ornithologists for decades. Before the Identidad Madidi expedition began, there were already 1001 bird species recorded in the park, roughly 90 percent of the species they expected to be found there. In contrast, the existing data records only 25 percent of the butterflies that are expected to live in the park. In less than two years, the expedition has logged 372 butterfly species for the first time in Madidi, bringing the total number of records in 2015 to 1080 butterfly varieties, more than can be found in all of North America. Wallace says a conservative estimate for the final tally is around 1600.

Although the influx of different species is exceeding original expectations, the most unprecedented findings of the expedition are the six new species of vertebrates registered by 2015. These are not just ‘new’ to Bolivia or Madidi, but ‘new’ to science. This has clearly drawn attention  to Identidad Madidi. Last year, the local and international press extensively covered the discovery of a new rubber frog, the Oreobates sp. nov.

What’s even more incredible is the extensive potential for new discoveries that remains in the park. This is explicit when considering the lack of data Identidad has collected on moths as opposed to butterflies, which are the only invertebrates the study has focused on. It has focused on butterflies for two main reasons: they are more charismatic, and far more ‘manageable’ in terms of the number of species. Wallace says they could find between 10,000 and 15,000 different species of moths in the park. ‘At one point,’ he recounted, from a previous excursion into the park, ‘the entomologist estimated there was something like 300 to 400 species of moths on one bed sheet with a light at one time.’

The need for more research and attention is true for the majority of the most ecologically diverse areas in the world. It is difficult to show that Madidi is the most biologically diverse protected area in the world because that level of data is not yet available for other protected areas. Before beginning the expedition, the Wildlife Conservation Society used the data on the Manu park in Peru as the closest comparison for Madidi. Manu, however, doesn’t contain tropical grasslands and only covers an altitudinal gradient of around 4000m. By the end of Identidad Madidi, Wallace expects they’ll be able to say that Madidi has more vertebrates and butterflies than any other national park in the world.

For Wallace, the need to communicate the importance of Madidi to the all of Bolivia is at the heart of the project. ‘Whether it turns out that Madidi is 1st, 2nd or 3rd in the world for biodiversity doesn’t matter,’ he says. ‘The data we are collecting is crucial.’

Today, the project is being taken to schools across the country and has reached more than 18,300 students in approximately 149 institutions, encouraging and exciting young people in Bolivia. For many conservationists, a primary goal of their work is to expand people’s knowledge of the areas they study in order to encourage their protection. The reach of Identidad Madidi in Bolivia is extraordinary. By 2017, the project hopes to reach an additional 150 schools, totalling 40% of all educational institutes in La Paz and El Alto.