I Can’t Feel My Face When I’m With You 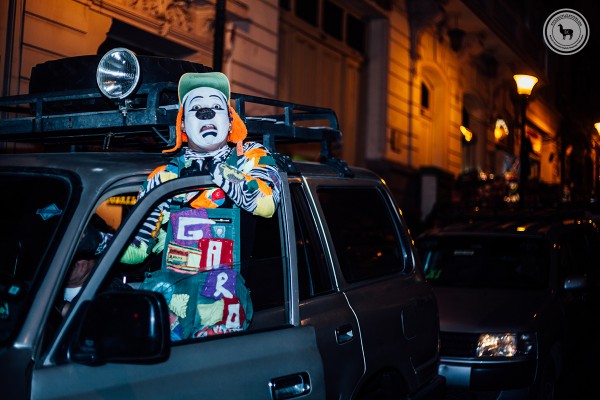 A One-Sided Love Affair That Was Never Meant to Last

I cannot really explain how this love came to be. What I can tell you is the story of how we met and let you decide it for yourself.

That day, I wasn’t looking to fall in love. I was tasked with interviewing a clown for this publication, a clown that does not speak but only communicates in squeaks and whistles. I was told his name was Edgar but goes by Garo, that he was 27 years old, and that for the last three years he’s been busking on the corner of Sagarnaga and El Prado nearly every night. I heard that he loved to get the audience involved in his routine, and that each performance was a crazy mixture of pantomime and acrobatics. He apparently channelled his inner child, mocking unsuspecting passersby and harassing vehicles stopped in traffic.

I set out to find him and to ask him the usual questions: Do clowns get sad sometime? Does it bother them that they are often feared? Do their painted faces disguise constant pain and sorrow? You know, questions of that nature.

When I got to Sagarnaga, I heard him from across the square. We made eye contact, and I felt my heart flutter. He squeaked something that sounded vaguely familiar but escaped my understanding. I’m pretty sure it was ‘I love you, marry me, let’s start a family’ – but like I said, it was a bit squeaky and unclear.

We don’t pick the people we fall in love with, and while I never planned to love a clown, this is exactly what happened. Many of us fall for clowns, but mine just happens to be the kind that paints his face and wears bright, patchy outfits.

We don’t pick the people we fall in love with, and I never planned to love a clown.

He went back to entertaining the crowd and I was drawn to his confidence and the love he exhibited for his craft – things I really respect in a man. During his break, he ran up to me and squeaked in my face – how bright and promising our future seemed at that time!

Now, I am not a naïve little girl, but I know that any woman would consider herself lucky to be loved by this clown. Knowing that there are very few, if any, female clowns working the area, I asked him what he liked in a woman. Based on all the women he hit on and whistled at, I would say he seems like to women in short skirts, women holding babies, women carrying large sacks on their backs, women who are walking quickly, women who are walking slowly, women over 50, women under 50, women on their cell phones, and women with men on their arms. This clown did not discriminate, which just goes to prove the purity of his heart. Clearly I had a chance with this clown, and would just have to learn how to communicate it to him, so the following day I put on my best face and headed out to find him.

I won’t lie to you and say it was easy when I found him making eye contact and whistling at another woman that harrowing next day. Now the squeaks that used to make my heart flip only serve to haunt me as I walk the lonely streets of La Paz. I think about how I could have been the woman who finally made him speak his first words. I think about the man who made me laugh – a man of few words and many squeaks who seemed to understand me better than any other. I think about him daily, but most nights I just end up in tears, watching my makeup run in the mirror.

Most nights I just end up in tears, watching my makeup run in the mirror.

Like in most relationships, I guess there was some miscommunication – maybe I misread the signs, I can admit that now. I thought I spoke Spanish, but maybe not his squeaky dialect? This is something my therapist is still trying to unravel.

He’s really cute actually, my therapist. I really do think he cares about me in a special way. Whenever we make eye contact, his brown eyes kind of sparkle.