Humor with a purpose 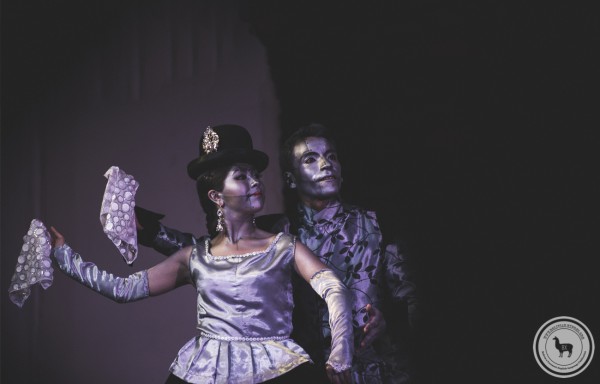 Las Mentes Ociosas and their brand of musical comedy

The Palacio de Comunicaciones in La Paz is not as imposing as a theatre can be. Imagine your high school auditorium with improved seating and a sound booth. When Los Mentes Ociosas took the stage, however, they transformed the space into a highly professional venue. It didn’t seem like this short performance would be as outlandish as their social media presence would have one believe, but within minutes, robots were carried onto the stage and Los Mentes Ociosas took form. The brevity of the act didn’t detract from the hilarity of the group. As the show came to a close, one of the characters, like a madman, screamed to the object of his affection:

To put these remarks into context, the group was performing Lady Gaga’s Bad Romance, which gave way to Miguel savagely screaming the verses. In their performance, they transformed a tale of loving someone who is bad for you to that of a psychotic man’s obsession with an unknowing individual. Ending the show was the chaos of the quartet’s lingering harmonies, Miguel’s  psychotic laughter, and the audience’s guffawing.

‘Los Mentes Ociosas’ are unlike any people I’ve ever seen, let alone any musical group. They are wonderfully and unequivocally weird. The members, Pamela, Miguel, Carlos, and Mauricio, are undoubtedly talented musicians, but what makes there act so unique is their unabashed sense of humor.

When talking with Pamela and Miguel about their act, it becomes clear that skits of this nature are a core component of their performance. They perform popular songs by western artists and twist the story into something completely different. They often take it even further and use the original lyrics and melodies of the songs, but transform their meaning by modifying the context. They tell a love story between Batman and Robin with songs by the Mexican trio Pandora, or that of Mr. and Mrs. Claus with tunes by the Argentine duo Pimpinela.

Their performances are silly, but serious. ‘Music is so rigid,’ Pamela says. ‘We like to be rigid, but play with it. You can’t joke about music: A major has to sound A major, but, what we do is we joke around it. We are silly, so our performance is silly.’

Beyond the self-deprecating fat-jokes that Los Mentes Ociosas revel in during the act, the quality of their performance comes through in the near-perfect harmonies and in the message behind their humor. When Pamela performs Beyoncé as an aria, she not only levels opera with pop music, but she also performing a rather brilliant adapted piece of music.

This is all tied into what the group calls ‘Responsible Comedy’. Their performances often address contentious aspects of society, namely gender, identity, and politics, without attacking or disrespecting specific individuals. One of the groups most dynamic performances is ‘Disney Halloween’, the tale of a serial killer who hunts women, told through Disney showstoppers. One character asks: ‘Where will I hide the body?’ and the rest of the group responds with a chorus of, ‘Under the sea, under the sea.’ In the show’s grand finale, the heroine, originally depicted as weak and intellectually inept, kills the man and saves the day. The goal of this kind of performance is to create discussion amongst the audience regarding things like gender and the socio-political landscape of La Paz.

Music with such a level of consciousness is rare in popular culture. It is clear that Los Mentes Ociosas take pride in their brand of lyric-dependent music, hoping to remind people that music isn’t just for dancing. In many ways, they achieve this. They get the audience to question the fixed norms of society whilst being entertainers, not teachers.