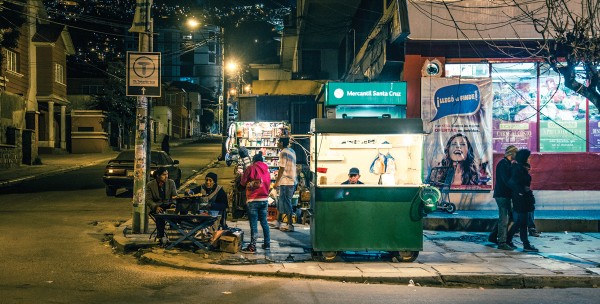 Legend has it that the man selling salchipapas on the edge of Plaza España has been around for decades. Jackie, who works in the bar Diesel on Avenida 20 de Octubre, claims that when she was a child, the same man owned the same stall, some 30 years ago. So how many salchipapas is that in a lifetime of street food? He opens the stall at around 6 pm and closes at midnight. At an estimate of 40 an hour—that makes 240 a day, 1,680 a week, and 87,000 a year (giving him a few days off for the many Bolivian bank holidays). A ballpark figure of just over two and a half million salchipapas. No wonder he’s grumpy.