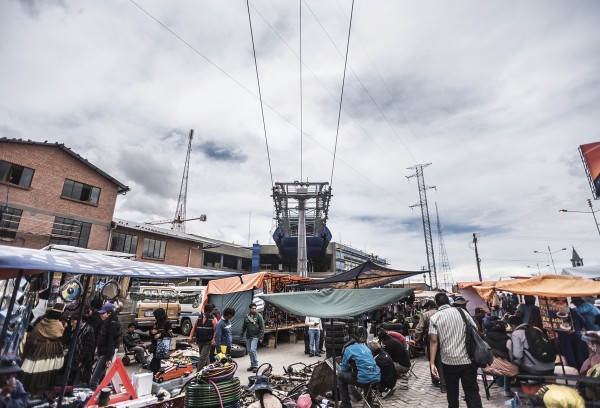 ‘The Línea Azul will definitely improve our lives. It will be much easier for me to travel and sell my products and go down to La Paz more quickly,’ says Carlos, a Río Seco resident and kitchenware vendor in the 16 de Julio Market. He seems to see the intended benefits of Mi Teleférico’s latest project, a cable car line across the flat city of El Alto. Although this mode of transport is typically designed for cities with severe inclinations, as of March of this year, the new Mi Teleférico line will serve a horizontal city and extend the reach of an integrated public transport system.

The new passengers will be able to travel the length of El Alto in under twenty minutes, an unthinkable journey time at ground-level. ‘We saw that there were huge populations in these peripheral alteño neighbourhoods,’ explains César Dockweiler, executive director of Mi Teleférico, ‘areas that are in full expansion and with an increased necessity for transport services.’ The line will provide direct access from the far reaches of El Alto to the centre of La Paz through the Blue-Red Line connection. This could catalyse a change of demographics in the city. Susana, who is an English teacher from El Alto, explains that young professionals could choose to live in more affordable neighbourhoods and commute to the centre of La Paz.

Critics of the project question the exorbitant funds required for the cable car line, compared to more affordable transport solutions for a flat city. Although the city’s landscape suggests the need for improved ground level transport, one of the particularities of El Alto is that it houses one of the biggest markets in Latin America, the 16 de Julio Market. When the feria comes alive on Thursdays and Sundays, the entire area becomes inaccessible, as the main roads are blocked by stalls, sellers, and customers. The new line would effectively bypass this whole part of the neighborhood, alleviating ground level traffic and making the journey through, or rather over, the area much easier.

It will provide direct access from the far reaches of El Alto to the centre of La Paz through the Blue-Red Line connection.

Vendors at the feria see this new teleférico line as an opportunity. ‘I’m very excited, I think we will see a lot more business,’ says Carmen Rosa, owner of a makeup and second hand clothing stall in the market. ‘We already have much more commerce since the Red Line opened, so hopefully we will see even more customers from the Río Seco area’, one of the most isolated parts of the city.

The blue line will end in Río Seco not only to facilitate the commute of local residents, but also to connect the city’s transport system to well-trodden tourist trails. As Dockweiler explains, Río Seco is a crossroads for multiple destinations. ‘We have Tiwanaku nearby, which is one of the main tourist attractions in the country, and we have exit points to Copacabana and Lake Titicaca. Day to day, it is incredibly difficult to get to these places, and even worse on market days. There is a huge demand for transport.’

With the inauguration of the Linea Azul around the corner, it is impossible to not have doubts about its aims. Is it the best use of public resources? Will it actually increase accessibility and social mobility, boost commerce, and reduce traffic and pollution in the area? Although none of this is guaranteed, the intentions of Mi Teleférico seem genuine in trying to improve the lives of alteños and paceños alike with this novel project.