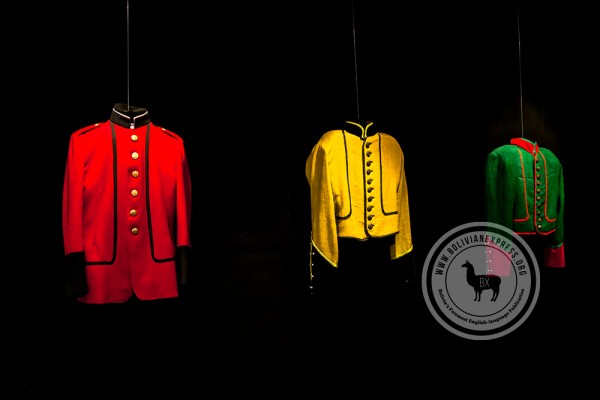 Calle Jaén, with its colourful houses and its long history going back to the 18th century, often overshadows the small museums which call it their home. Amongst these, Juica Tadic Pereira works away in the small Museo del Litoral Boliviano. This museum charts the history of the War of the Pacific, from 1879 to 1883, in which Chile took significant stretches of coastline from its adversaries, Peru and Bolivia.

Considering the powerful hold that the idea of the sea has for many Bolivians, I set out to learn why history is important to them, and see whether it still holds any relevance today.

On a six-month tenure in charge of research at the museum, Tadić Pereira’s passion for history is a family affair. ‘Both sides of my family are full of history,’ she says. Her paternal grandfather fought in the First World War, when he was only 13 years old, and she claims descent from a commander during the war for Latin American independence, León Galindo.

I asked how this extraordinary tale, which manages to weave its way through some of the biggest events of the past two centuries, brought her to the Museo del Litoral.

‘It’s part of my life,’ she says, ‘it’s like living it…. We had grandparents who made history.’ This is certainly true. León Galindo reportedly fought in the Battle of Boyacá, which ensured the independence of Gran Colombia from Spain, as well as the battles of Pichincha and Ayacucho.

The museum charts the history of the War of the Pacific, in which Chile took significant stretches of coastline from its adversaries, Peru and Bolivia.

Pereira grew up with history, which has helped fuel her passion for the subject, but not many can claim to be descended from such an impressive family. In some ways, the elitism of academia is only reinforced in the disparity between Pereira’s and the general population’s access to history.

Pereira argues that history is still and should remain important. ‘We are the result of what happened in the past,’ she says. She goes further, mentioning the Chaco War, between Bolivia and Paraguay from 1932 to 1935, fought over petroleum reserves. It’s clear that she is trying to make history more relatable.

This is a step in the right direction. But how successful has the Museo del Litoral been in engaging Bolivians with their history? The clearest evidence of any success would be the schoolchildren who explore the museum during our interview.

‘In the mornings it’s amazing,’ Pereira says. ‘Children from schools both private and public come. At least 300 each morning. They come from the Zona Sur and El Alto. They even come from the provinces.’

As it turns out, the majority of visitors are Bolivians rather than tourists. According to Pereira, this has has been due to a concerted effort to make the museum more accessible to Bolivians, who she says are not used to the museum-going experience.

A good example of this is a small room off the courtyard of the museum, often the first room visitors see. Inside, a projector shows an image of the sea on the opposite wall. A hidden speaker plays ambient sounds of the ocean.

Pereira says that once a Dutch couple came out of the room laughing, telling her that the room was ridiculous. The room’s purpose, however, was quickly explained.

‘Many of the children who come here have never seen the sea,’ Pereira says. ‘They can see what they have lost.’

‘Many of the children who come here have never seen the sea,’ Pereira says. ‘They can see what they have lost.’
—Juica Tadić Pereira

Another reason for the museum is to serve as a rallying cry for regaining Bolivia’s lost coastline. It’s an emotional task, perhaps not the best basis for good historiography, but it does, however, engage Bolivians with their country’s past.

This emotional framing of Bolivia’s history seems to benefit the museum—a quick glance at the  guest book confirms the museum’s popularity. However, with so much concern for regaining the coastline and anger at politicians’ perceived failings on the issue, people could fail to engage critically with the history they are being shown.

As we wrap up, after a whirlwind of politics, history and family, there is an opportunity to ask one last question: whether the government could do more to promote this museum, and history in general.

According to Pereira, that’s unlikely. ‘When a country has a mediocre political class, [that political class] has an interest in having an indolent population. We are trying to tell history in a way that people become startled, to wake in the people the inquisitiveness to know more.’

Let us hope that this is true, that this museum can engage Bolivians with their history, and that the emotional significance of this age-old conflict does not impede this.