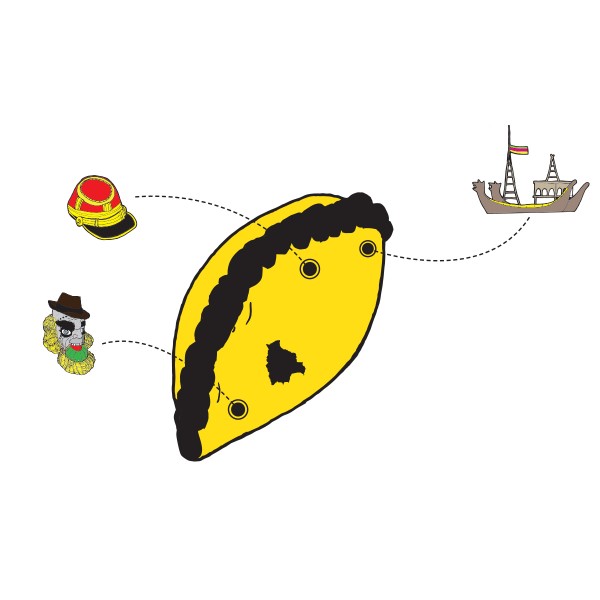 Claiming the right to call something your own.

Whatever your style, whether it’s strolling to the local salteña kiosk, sitting in one of the many salteña-selling chain restaurants or independent cafes, or eating out of a serviette whilst rushing to work, salteñas form an important part of the matinal routine if you live in Bolivia. In Colombia, I was regularly asked about the quality of Bolivian food. Keep your empanadas, your tamales and your arepas, I would say, salteñas beat them all.

I asked Bolivian cook and salteña enthusiast Virginia Gutierrez if salteñas were sold in other countries. ‘I think they have them in Argentina,’ she said. ‘I'm not sure, though, you'd have to check.’ But a Plaza España salteña-seller was more adamant. ‘Only in Bolivia,’ she told me.

Yet, it is true that the very name of this Bolivian staple locates its identity in Salta, Argentina. The creation story is as follows:

Juana Manuela Gorriti – a salteña of the non-edible variety – and her family relocated from Argentina to Bolivia  in 1831, escaping the Rosas dictatorship. Well-known for her intellect, writing and grief-strewn life, Gorriti was also the inventor of the salteña, and thus named the delightful creation after her home province.

‘It's all in the name,’ goes the well-known phrase. Yet, in this case, all is not in the name. First created and sold in Tarija, salteñas belong more to Bolivia than to the Argentine province in which their creator was born and died.

A person born in one place and then raised in another is often asked where they feel they belong: the country from which they originated, or the one which has grown to be their home? Unfortunately, consumibles are unable to answer such complicated questions. So, this time, I'll provide the definitive, unbiased answer: salteñas are Bolivian, through and through.

If name does not define identity or origin, what does?  An official declaration, an agreed split-patrimony, a battlefield victory – the methods used are abound. But do they work? Let’s look at a few other examples of contested, multi-national treasures.

‘The Morenada is linked in no way to the Peruvians,’ claims Milton Eyzaguirre from The Museum of Ethnology and Folklore in La Paz. ‘In Peru,’ he explains, ‘they say the dance is part of a common culture that belongs to all Aymara people.’ But Milton contends the dance, which originated in the Bolivian municipalities of Guaqui, Achacachi and Taraco, has since been adopted by those living further afield on the altiplano. But how did the Morenada leave the confines of these remote communities? According to Milton, ‘Part of Aymara logic is to expand beyond Bolivia, to undertake a cultural conquest.’ Sharing is caring, is it not? Not when others try to claim shared items as their own.

Sometimes, sharing with Peru can be permitted, as is the case of the great Lake Titicaca. The independence of Peru in 1821 and Bolivia in 1825 gave way to the division of the lake, giving Titicaca a dual-nationality. It is almost perfectly divided between the two countries in a compromise that seems to compromise nobody in particular.

Another water-based, less peaceful, but certainly Pacific example, comes in the Bolivian-Chilean dispute over the sea. When Chile conquered Bolivia in the War of the Pacific, it took the country’s access to the sea. All is fair in love and war, right? Wrong. Bolivians to this day are fighting to claim back what they believe is rightfully theirs. However, for Chile, the military victory equals lawful possession, so it adds Bolivia's former piece of coastline to its already vast collection.

Just as salteñas are unable to declare where their allegiance lies, so too are dances, lakes and bits of land. Whether it is claimed, shared or won, possession remains forever disputed as countries continue to fight over what they desperately want to call their own.