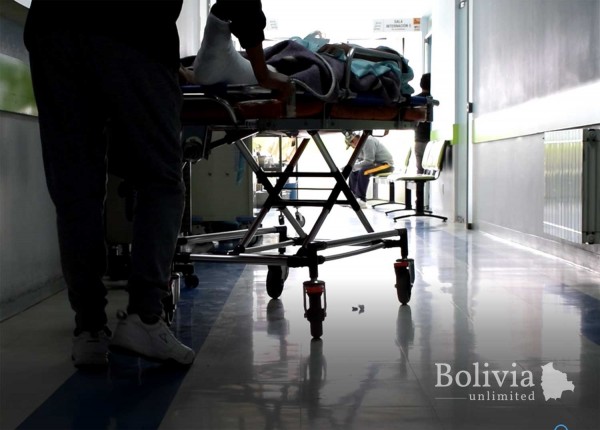 Never before have matters of health been so widely spoken about, broadcast, and prioritised on such a global scale as they have been during the COVID-19 pandemic. The public healthcare system and the Ministry of Health in Bolivia have played leading roles in the battle against the coronavirus contagion in the country. Needless to say, the Ministry and medical staff’s efforts have been widely extolled. Bolivian politicians, public figures and the general public have taken to social media and national television to show their appreciation. In a similar vein, La Razon reported how over 25 million bolivianos (US$3.8 million) and hundreds of medical supplies had been donated to Bolivia by various private international entities, such as the American company HS Medical Inc to reinforce health institutions and hospitals during these pressing times. While this support has boosted Bolivia’s medical inventory and morale, the health crisis has also dragged pre-existing flaws in the public health system into the spotlight. Many of these issues have been under fire by medical staff for several years who strongly believe that (a lack of) government funding is the root of public healthcare problems in Bolivia.

The level of healthcare inequity in Bolivia is notable. As a country, it has a relatively high number of deaths from preventable illnesses. For example, it has the third highest maternal mortality rate in Latin America and the Caribbean, after Haiti and Guyana, with 155 per 100,000 live births according to statistics from the World Bank. On a positive note, the government has gradually been increasing the amount it spends on healthcare, which has arguably led to an improvement in the population’s overall well-being. In 2010, the health expenditure was 5.5 percent of the country’s GDP. In 2017, this number had risen to 6.4 percent and, accompanied by a growing economy, has meant an increase in health expenditure per capita has gone from US$103 in 2010, to US$220 in 2017. This change is possibly marked by the steep rise in life expectancy in Bolivia over the past decade, even if it is still comparatively low for Latin America.

Although everyone has some form of access to healthcare in Bolivia, there is a noticeably large difference between the waiting list and the quality of the medical treatment received of those who attend private health centres, and those who go to public health establishments.

What does public healthcare mean to Bolivian medical staff? When asked to define public healthcare, Álvaro Cabezas Sánchez, Director of the Hospital Los Pinos, chooses to describe it as ‘the branch of medicine which encompasses all activities relating to health and illness, and the only one that is capable of providing solutions for a population’s general wellbeing.’ The Bolivian Healthcare system, like most, is composed of a public and a private sector. Nationally, the public sector is headed by the Ministry of Health but, locally, the municipalities are largely autonomous and have the final say on how funds are allocated. The public sector can be further separated into two sub sectors. There is a short-term social security sub sector that grants short-term insurance packages to individuals, and the public sub sector that looks to provide some level of health care to those who do not have insurance of any kind. In 2018, four million of Bolivia’s 11 million people had short term insurance policies and less than one percent belonged to the private sector. This meant northwards of 60 percent of the population had no coverage at all. On the 1st of Match 2019, the Sistema Único de Salud (Unified Health System), or SUS, was introduced in Bolivia. In essence, this programme came about as an amplification of a previous law that guaranteed free health care to certain groups, such as children under the age of 5 and pregnant women. With the arrival of SUS, the population that had no form of health insurance received, and continues receiving, free access to health care.

Victor Vaca, a doctor and the director of the Hospital General de los Yungas, explains how all public health establishments are ranked on a universal scale of one to four. ‘If you have a level one health establishment, it will be very basic and consist of one general practitioner and one nurse who are able to treat basic infections and carry out general check-ups,’ he says. ‘Next, we have level two hospitals, like the one I work at in Coroico,’ Victor continues, ‘they offer treatment in the five essential specialist fields in medicine: pediatrics, gynecology, surgery, internal medicine and anesthesiology, which is all you need to cover most health complications.’ Level three hospitals provide specialist treatment for more complex and critical illnesses such as cancer. In fact, as mentioned in a recent report carried out by La Razon (31 March 2020), there are only 33 level three hospitals across the nation. Level four hospitals are the most scientifically advanced health establishments. They have laboratories installed for medical research, and are reserved for highly specialised and sophisticated treatments. Bolivia does not yet have a level four hospital. According to Carlos Lopez’s 2019 article on level one health centres, which featured in the Los Tiempos newspaper, of the 3,253 hospitals and clinics which exist in Bolivia, approximately 70 - 80 percent of them were ranked level one. 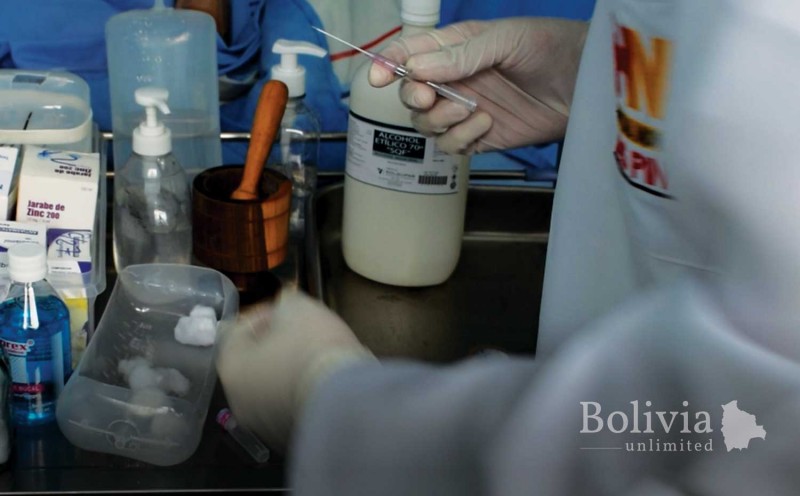 The public healthcare system in Bolivia does also deserve some praise. The SUS programme has given every Bolivian citizen the possibility to access healthcare. In a speech to the World Health Assembly in May 2019, the Bolivian Minister of health at the time, Gabriela Montaña, celebrated the fact that ‘in just less than 2 months, more than one million health checks have been carried out.’ Telesur reported that Fernando Leanes, the representative of the Pan American Health Organisation and the World Health Organisation, described Bolivia’s health-related policies as ‘a model for Latin America.’ Likewise the Programa Ampliado de Inmunización (Expanded Immunisation Programme), more commonly known as PAI, has given children free access to vaccinations, thus precipitated ‘10 years of a yellow fever-free Bolivia’, says Sánchez. In addition to these positive measures, health professionals in Bolivia have an admirably high level of training. ‘Foreign students come to the country to study careers in medicine and return to their countries to practice the profession,’ explains Cristina Aliaga, the head of finance administration in the Municipal Hospital Los Pinos, La Paz.

However, for Boris Corini Bustamante, a surgeon at the Hospital Obrero in La Paz, public health in Bolivia is ‘the Achilles heel of the nation’s overall healthcare system.’ ‘Sadly, there are more deficits than virtues when it comes to public health,’ he says, ‘there is a lack of infrastructure.’ This sentiment seemed to be shared by other medical staff who, similarly to Bustamante, criticise the SUS’s bad planning and its poor funding. With little investment being pumped into the health sector in Bolivia, public hospitals and clinics have found themselves too under-equipped and under-staffed to handle the dramatic increase in patient numbers brought on since the introduction of SUS. The underinvestment of the SUS initiative ‘resulted in hospitals running out of supplies just two months into the programme, generating more complaints from the general public about the service they receive,’ describes Aliaga. And although prospective doctors receive a high level of training in Bolivia, once they have graduated many of them look for jobs in countries with better opportunities and more governmental support. This, in turn, fuels the problem of understaffing that is rife in Bolivia.

The government has gradually been increasing the amount it spends on healthcare, which has arguably led to an improvement in the population’s overall well-being.

When talking about the state of medical equipment in hospitals in La Paz, Sánchez jokes about how many medical tools and pieces of equipment ‘should be in a museum, not a functioning hospital that still uses them.’ In agreement, Vaca also describes the medical equipment to be ‘ancient’ in the public healthcare system, and makes a point out of comparing it to the ‘latest models of medical equipment’ that are used in private clinics across the capital. The inadequacy and the lack of equipment could complicate things in Bolivia if the number of COVID-19 cases were to rise, given that patients with severe symptoms will need to be placed on respirators.

According to Francis Álvarez, a junior doctor at the Hospital Municipal Boliviano Holandés in El Alto, rural populations suffer the most from a lack of investment in health care. Outside of urban spaces, ‘there are no level one health centres that meet the minimum requirements to attend patients properly,’ states Álvarez. Although everyone has some form of access to healthcare in Bolivia, there is a noticeably large difference between the waiting list and the quality of the medical treatment received of those who attend private health centres, and those who go to public health establishments. Aliaga admits that there is an obvious discriminatory social dimension when it comes to healthcare in Bolivia. ‘The more money a person has, the easier it is for them to access the highest quality of medical care,’ she laments. 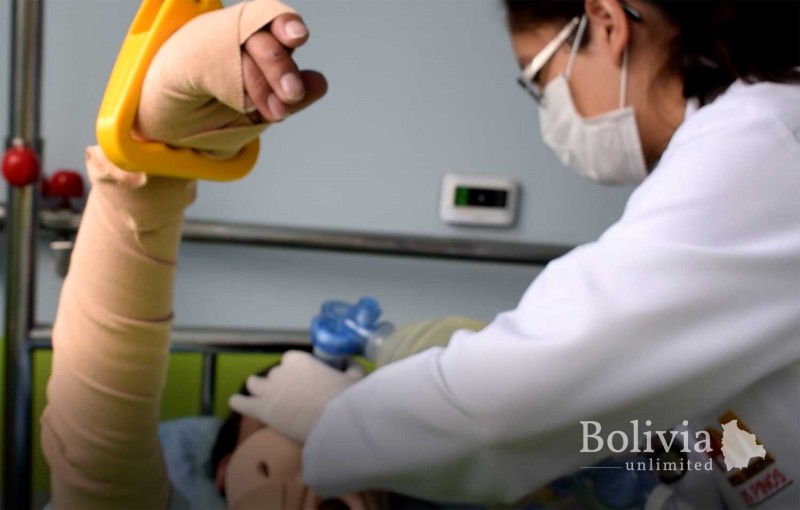 Despite Bolivia’s public healthcare limitations, there is no denying the sense of commitment, and professionalism that is demonstrated by the medical staff who were interviewed by the Bolivian Express. When asked about their favourite aspect of their job, doctors Vaca and Álvarez both agree that nothing compares to the gratitude they receive from patients. ‘The best thing about my job is seeing how well my patients are doing and the sincere gratitude they express towards me,’ Álvarez says. Surgeon Bustamante believes that his work with kidney transplantation offers patients a better quality of life. He loves his involvement in giving them a chance to ‘reinsert themselves back into their family life.’ For hospital administrator Aliaga, she believes that her role as a civil servant for the Municipality of La Paz ‘exceeds merely doing your office job.’ ‘We are working towards generating the “greater good” for our population,’ she adds. Her comments resonate with what the director of Los Pinos hospital, Sánchez, has to say: ‘By working in the public sector for the municipality, I feel we are making a real difference to the healthcare system in general. We have changed the restrictions to make healthcare more accessible, built new hospitals, and created job opportunities for municipal health staff.’

Doctors, nurses, administrative hospital staff, and Ministry of Health staff in Bolivia have all proven that not all heroes wear capes. Their indispensability and bravery during the pandemic has hopefully demonstrated that their demands and suggestions on how to build a more prosperous public healthcare system should not fall on deaf ears. While the pandemic continues to force us to question our societal and moral ideals, it is a necessary time to reevaluate what and who we value in society.