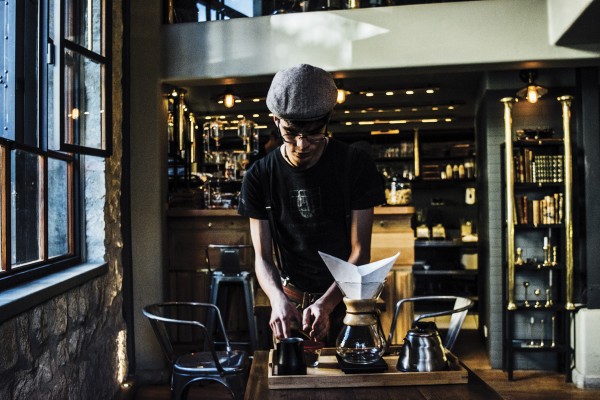 Coffee with identity below the surface

The exterior of the boutique hotel, Altu Qala, embodies a 1930s Chicago revival, with two added floors looking ahead over the other buildings on the Plaza Tomás Frías. Crisp and white, the architecture itself envisions a path of modernity for the rest of the neighbourhood. On the ground floor of the soon-to-open hotel is the HB Bronze coffee shop, the latest endeavour of the Hierro Brothers company.

The first time I entered HB Bronze, I felt as if I were expected. With newly polished posts gleaming in my peripheral vision, I was enveloped by soft cocoa tones as a barista opened the heavy door for me.

‘If you feel as if something is missing, make it happen yourself,’ says Boris Alarcón, who owns the coffee shop. Boris opened his first café, The Writer’s Coffee, in early 2015, addressing the gap in the gourmet coffee market in the old district of La Paz. Both shops belong to the Hierro Brothers’ enterprise, whose business plan is to create a series of hangouts with unique personalities in the city rather than a chain of identical stores. The Writer’s Coffee is located in one of La Paz’s legendary bookstores, Libreria Gisbert, and HB Bronze is in a boutique hotel.

Boris Alarcón has designed the furniture and décor of the café in a style he has dubbed ‘urban archaeology’.

To create HB Bronze’s unique identity, Boris has individually selected and designed the furniture and décor of the interior, in a style he has dubbed ‘arqueología urbana’ or ‘urban archaeology’. Each table stand is made from the legs of old sewing machines while the shelving is built out of deconstructed antique bronze beds. The use of bed posts is fundamental to the identity of the café. According to Boris, who considers himself a designer, these antiques have acquired an entirely new purpose while maintaining their practicality and aesthetic.

The adornments come from various locations, notably the famed Mercado 16 de Julio in El Alto. Boris chose to implement bronze in this manner after reading Raza de Bronce, a  novel by Bolivian historian Alcides Arguedas that, he says ‘presented indigenous society in a very sad light. By using the bronze material, I wanted to bring modernity to the already present indigenous culture without attempting to eradicate it.’

The chairs in the café were selected and imported from Europe. They are made of steel and were designed by the French Tolix company in the 1930s, keeping up with the architectural dating of the hotel's façade. The table tops are made of wood recovered from the doors of old houses in La Paz.

The café serves paninis with a local parmesan cheese instead of the Italian variety and a gourmet sandwich with jamón de llama.

Although HB Bronze has a Bolivian identity, Boris’ passion for travelling is evident in the food that is served at the café. The dishes are designed to please the palate of the hotel’s visitors, while featuring unexpected Bolivian twists. In the kitchen, head chef Lucía Trujillo and her sous chef work together to check the quality of each plate before it is served. Since the ingredients are sourced daily from local markets, the plates are often slightly altered depending on the fresh produce that is available. Notably, the café serves paninis with a local parmesan cheese instead of the Italian variety, and a gourmet sandwich with jamón de llama.

To ensure coffee quality, the baristas at HB Bronze employ a range of international coffee preparation techniques, including AeroPress, Chemex, and Fretta. As an added touch, each cappuccino comes with a small chocolate biscuit, which feels personal and comforting, and is also the way coffee is served in The Writer’s Coffee. They use a different brand of Bolivian coffee bean each season, through a process that Hierro Brothers has named ‘Altitude Selection’. Service is also fundamental to maintaining the high end image of the venue, which turns into a trendy bar in the evenings. The company only hires young people who are trained meticulously to meet a certain standard of quality.

Boris has big dreams for the future. He hopes to expand his business throughout La Paz, opening in locations such as Sopocachi and Zona Sur. To competitors’ dismay, he also has his eyes on the Calle Sagarnaga.

Boris laughs when asked about the opening date for the Altu Qala hotel this year and says, ‘That’s my next surprise.’