Haute Cuisine in a Fashionable Boîte 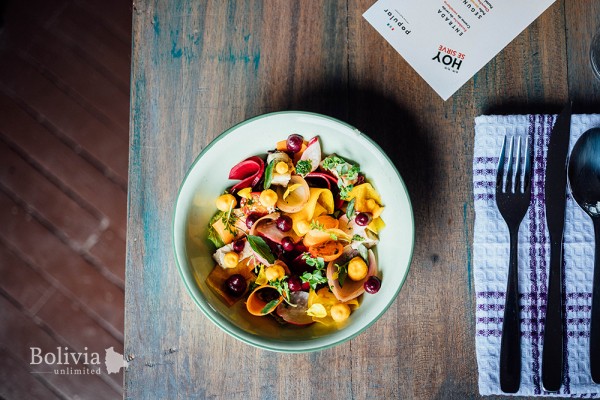 On 17 November, in a sun-trapped square in which cocktails flowed and canapés were distributed around the room, a new restaurant opened near Plaza San Francisco.

Co-founders Alexandra Meleán, Juan Pablo Reyes and Diego Rodas opened the doors of Popular to friends, family and journalists to show what they had to offer. The night was a great way to celebrate the exhaustive efforts they made to create this masterpiece over the previous month. Featured appetisers for the opening included three typical Bolivian dishes: tucumanas (mini empanadas, stuffed with chicken stew and peanut sauce) presented on rocks with charred wood, papa rellena (stuffed smoked potato with beef-cheek stew) and escabeche de cerdo (rolled pork with pickled vegetables) in quirky enamel teacups.

The old colonial-style house on Calle Murillo in which Popular is situated is a fitting location for the new restaurant, which has been receiving praise since opening just over a month ago – not only from locals, but also tourists and travelers seeking authentic Bolivian cuisine. ‘It seems La Paz locals are excited about contemporary Bolivian food in a casual environment,’ says co-owner Meleán. ‘Tourists and travelers are both surprised and satisfied by our proposal, too. We are pleased with the response.’

Meleán says that the name, Popular, was chosen in the hope of ‘reflecting the simplicity of our culinary concept: good, everyday Bolivian food inspired by the street markets, like Mercado Rodríguez, nearby.’

The partners aimed to create an excellent prix-fixe lunch menu that won’t break the bank.

With a menu that changes weekly, a recent prix-fixe lunch included anticucho or crema de lentejas as an entrada. At our table of four, the cow’s heart was popular. The dish came presented on a smooth stone, the sliced meat skewered on two charred twigs. The carne was tender and tasty, accompanied by the traditional maní dipping sauce. Then the main course: a choice of pollo frito or ispi. The ispi, a small fish native to Lake Titicaca, was partnered with a puré de mote, dried beetroot and other vegetable crisps. The pollo frito was served with a selection of greens, avocado, baby tomatoes and boiled potatoes. Dessert consisted of ensalada de sandía or helado de canela.

Presentation was on point, and so were the flavours in both dessert dishes. The ice cream came with a tawa tawa (a type of deep-fried Bolivian pastry) and a honey dipping sauce. Every item complemented the others. The fruit salad featured roasted watermelon presented in a bamboo bowl, with lemon syrup and caramel escorting the fruit. Fresh-squeezed juice and a selection of bread and pickled vegetables were provided with the meal – in addition to, as the menu states, an extra dose of amor.

The passion that’s evident in the preparation and presentation of Popular’s food is also what brought together the three co-owners. They all met when working together at the Atix Hotel’s Ona Restaurant in Zona Sur. ‘Juan and Diego were hired to run the kitchen,’ explains Meleán. ‘As the in-house photographer, I photographed all of the dishes they initially proposed for the culinary concept of the restaurant. We all share a love for beautifully plated and delicious Bolivian food. So, naturally, we became friends.’ This care and attention for details shows through in the way food is presented in the restaurant, with rustic stones, bamboo bowls and quirky enamel dishes. The team pays explicit attention to detail.

Opening Popular has been a learning experience for the partners. Although their background aided them during the development process, finding the right market and approach was tricky. And even if the restaurant runs exceptionally smoothly now, Meleán says that the project originally came together on the fly. ‘We have had to improvise a little,’ she says. ‘As owners, we are all equally invested in the project. I, for one, am currently learning how to wait tables.’ But the most challenging complication in opening the restaurant, Meleán says, was remodeling the space and ‘creating a modern yet laid-back environment.’

Modest pricing is another factor the partners had to consider, in addition to the quality and presentation of the dishes. They aimed to create a excellent prix-fixe lunch menu that won’t break the bank. And, for Bs 45, they provide an unforgettable experience. Soon, Popular will also be open in the evenings, featuring more dishes along with alcohol pairings at a slightly higher price.

Meleán stresses the importance of Bolivian culture and tradition to the restaurant: ‘Our menu features local Bolivian food, and we prefer to work with seasonal products, which are often in limited supply.’ Nevertheless, limited supply can benefit the finished product. ‘Changing our prix-fixe lunch menu every week is an exercise in creativity and resourcefulness,’ Meleán says. It’s true: the ever-changing menu frequently includes traditional Bolivian dishes with an exciting modern twist.

‘There is no limit to what we can do.’
—Alexandra Meleán, Co-Owner of Popular Cocina Boliviana

The restaurant is also a creative space which is used to collaborate and share ideas with chefs from other kitchens. On 15 December, Hay Pan’s Sukko Stach will be visiting Popular to cook some of his favourite dishes.

And there’s already talk of expansion. Although this the partners’ first project together, they want to expand on their concept of Bolivian cuisine. ‘There is no limit to what we can do,’ says Meleán.