Gustu: A New Flavour in Town 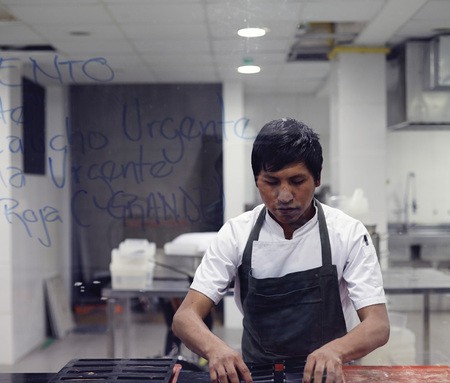 Reviews, Going Out and Food

Dinner is booked for two for Friday at 7 p.m. at the latest haute cuisine establishment in town. Come to think of it, it's not just the latest, but arguably the only restaurant to truly belong in this category in La Paz. Of course, there's La Suisse, there's La Comedie, as well as a small handful of other restaurants which have set the bar for fine dining in the city. But this time it's different.

Barely a week after its official opening, Gustu already promises to turn the local food scene on its head. To say such a thing would be hyperbolic had Noma, the restaurant’s creator’s better-known creation, not been voted the world's best three years running: in 2010, 2011 and 2012. Which it has (no big deal).

Gustu, which means 'flavour' in Quechua, has partnered with the Melting Pot Foundation and IBIS (an NGO) to do much more than start a new chapter in Bolivian food. They've set up a training scheme for young Bolivians, many of them socially disadvantaged. Melting Pot has prepared them for the grand opening by sending these aspiring cooks to work at the best restaurants in Peru, and hopes this way to create a new generation of not just chefs, but entrepreneurs and agents for social change.

This $1.4m restaurant has a lot to live up to, and I'm not just talking about its culinary and social ambitions. Not that they knew this or have reasons to care, but at the same time the previous evening Nick and myself found ourselves at Doña Lucy's fried fish joint near the General Cemetery. For Bs.14 we gorged on the finest trout money can buy, in at least one sense of the word 'fine'. Basic? Yes. Grubby? Perhaps. The best trout we've ever had? Without a doubt, fingerlickingly so. Gustu: it's on.

We arrive at our destination and linger for some seconds outside the imposing but understated exterior; it's a good indication of what's inside. No chandeliers or petulant front-of-house staff in sight. We're warmly greeted by two young women who take our bags (we came from a photography shoot and arrive with a suitcase and a Tesco bag, though we're not made to feel awkward about this. It's not that kind of place). The reception is warmly lit by the glowless amber light from almost 200 naked light bulbs.

Our budget is $100 for two and, having told them in advance, they've already arranged for us to have the five-course taster menu, plus wine and cocktails. Before trying a single bite this already seems thoroughly reasonable; and it's reassuring to know they haven't overinflated their prices in the hope of attracting the type of clientele for whom price is a proxy for quality (drug traffickers, faux aristocrats, snobs, etc).

We're sat at our table and the singani cocktails arrive shortly after. One has llajwa and is like the Bolivian take on the Bloody Mary. The other comes with chankaka and is the superior cocktail out of the two. That, along with the chicharron snacks on the table, already give me reason to come back.

As we wait for the first course, I stare fascinated out of the large (understatement) windows which seemingly hang off the walls like picture frames, and which are tinted in such a way that it can seem like you're staring at the city from inside a fishbowl. There are also large windows into the kitchen, which reveals an interesting mix of heights and ethnicities among the staff, who can be occasionally caught looking out at the diners, a bit in the way a DJ might survey the dancefloor to see whether his track selection is doing the trick.

The first course, amaranth with cherries rehydrated in white vinegar, arrives on stone slates which at first glance look like posh rustic bathroom tiles, but on closer inspection are actually the same as the wall slates. I say ‘Nick: We're eating off a piece of wall. How cool is that?’ Halfway through the amaranth (it's a tad salty), I realise Nick's slab is shaped differently to my own; it's slightly wider and has a jagged edge. It's in these pleasing asymmetries the character of the restaurant's matted brilliance shines through. The light is slightly harsh in the main eating area, which on the upside allows you to see what you're eating.

Next up is Gustu's reinterpretation of the popular street food anticucho, traditionally made from flame-grilled cow hearts. Obviously, there's a twist. They're chicken hearts rolled in ground peanuts on swirling lines of peanut sauce, crowned with thin slivers of green tomato. ‘Chicken hearts usually taste quite irony’ Nick points out, ‘I usually don't like them’. (Neither do I). He takes another mouthful. I've already finished my plate. The anticuchos are a resounding success, if only for making us like something we otherwise wouldn't consider eating. All of the irony-ness of the hearts is gone and the tomatoes give the dish a sparkling sharp finish. The powerful and aromatic Malbec Sepas del Valle they bring with this course complements the anticuchos very nicely.

We then get another slab, this time it's llama medallions in a sauce which consists mainly of banana and Brazil nuts. It's artfully tender and works as a dish. But it doesn't transport Nick anywhere special, and it's far too reminiscent of baby food for my taste. If the amaranth was a tad salty, this one is lacking in something; can't decide whether in punch or crunch. I suppose I could add some of the cool pink salt (coarse and fine grain) on the table, which comes from Uyuni but looks like it comes from Mars. But I don't. It belongs in the 'interesting' category, I decide, so I leave my plate unfinished to save space for the next two courses.

To our surprise, they bring us two desserts, one after the other. The first is chancaca and tumbo ice cream with singani. It's outrageously creamy and outrageously good, and gains a place in the evening's hall of fame, standing proud next to the anticuchos. This is followed by a coconut cake with crumble, passion fruit and cacao sorbet. Also great (though merely great, no hyperbole required). Both are accompanied by a sickly sweet Kohlberg dessert wine, which in my case doesn't need topping up (though I've never liked dessert wines so I'm the wrong person to judge whether it was any good). But two puddings? Really? Head Chef Kamilla Siedler later reveals that she knows Bolivians have a sweet tooth. A sure way to someone's heart is to give them sweet things, they say. It sure worked with me. At the end of the meal I was sated and verging on full, but it felt just right.

Aside from some flavours, a few questions linger on my mind after the meal. How does this compare to Doña Lucy's Bs.14 fried trout? Do these experiences even belong in the same category? Is this even a fair question to ask?

Eating Doña Lucy's trout can only be described as a fishgasm. Perhaps her food was unique not despite it's simplicity, but because of it. The unsubtle flavours and extravagant fat contents surely appealed to our inner neanderthal, not our inner intellectual. Doña Lucy offered us an authentic Bolivian experience without knowing, or needing to know, what it was doing. Its authenticity was it's essence, a property only unintentionally achievable. (Besides, you can make pretty much anything delicious by deep-fat-frying. Ask any Scot.) 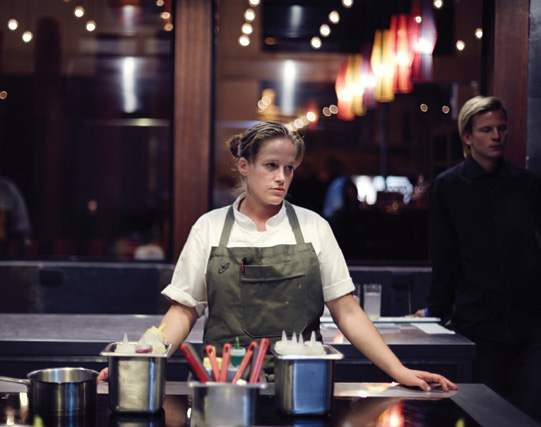 The corollary of this question, and at the root of any fine dining experience, is whether it's justifiable to pay twenty times the price for something which isn't guaranteed to elicit an experience of this sort? Or even forgetting about the price, what is it one's supposed to expect from a restaurant which, before it has even opened, is lauded so overwhelmingly, or whose precursor is ranked in such categorical terms ('Best', #1, etc)? It's a hard expectation to fulfil, and this is unfortunate and unfair.

If Gustu doesn't yet epitomise the elemental mouthwatering feeling even pre-linguistic infants can recognise (if not verbalise), it must do something else. And it does. When dining at such a place (and it's worth being explicit about this in a place such as Bolivia which doesn't yet have such a haute cuisine culinary tradition), you're engaged on several levels, of which food per se is but one element. At a place such as Gustu you're invited to revel in the aesthetic set of experiences unfolding across all of your senses, in the history of the ingredients and the social dimensions of what's being cooked up beyond the kitchen.

The question you, the reader, probably want answered is whether you should go and eat there. So here's what I think you should consider.

What really sets Gustu apart from its local competitors is its integrity, it's philosophy, and vision. Here are people trying to create something truly new and unique, and while doing so they aim to transform an entire society and culture. More than a restaurant, it's a movement. The scale of their ambition puts them in a league of their own. La Suisse is certainly commercially successful, but what's a Swiss restaurant doing offering an uninspired Sushi on the menu? Or why are you sometimes made to feel the owner is doing you a favour by allowing you to dine at La Comedie? Both of the aforementioned establishments are without a doubt professional and well run. Why, the food's even consistently good. What they're lacking is heart and artistry, and this is something Gustu has, unequivocally so. Even in the décor you can sense that extra attention to detail and craftsmanship, through which the restaurant manages to be obsessive without being fastidious. You should go. It's an imperative.

The last set of questions on my menu is speculative. In Noma's footsteps, Gustu does a good job at establishing itself as an experience restaurant. Everyone should go at least once, sure, even if only to be intrigued and amazed at the exotic creations. Yet to succeed commercially it will need to do more than this. They will need repeat customers who go and seek out the same succulent signature dishes time after time; where gluttons and aesthetes alike can find something to return back to. Somewhere you can go to irrationally. Thankfully, the menu is continually evolving. Head Chef Kamilla Siedler tells us they're experimenting with aloe vera: 'It's kind of disgusting. It's slimy. It's weird'. Chuño ? 'Haven't cracked the code yet'. Gustu is a research facility, and their basement bakery definitely has a laboratory air to it. There's even a large glass separation which you can draw on with board markers like a nutty professor. Going back to Doña Lucy, Kamilla acknowledges that 'without a doubt the best food here is street food'. It's clear this is the challenger to beat, not the other fine eateries in La Paz.