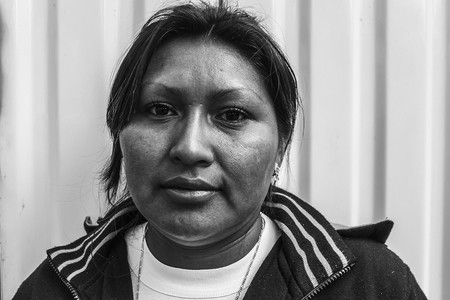 Elidet Ruth Mercado is a young woman with a lot to say. She loves to talk and explain her opinion, and from the look on her face and the tone of her voice you understand her desire to be heard and the seriousness of every single word. Elidet, whose friends call her Charito, is a 27 year old Community Director and President of a group of young people in the Guaraní community of Guirapayete.

Being a single mother to two young children in the conservative community of Guirapayete, an Indigenous Guaraní community 220 km from Santa Cruz with around 40 families, has been a challenge for her. When Charito remembers the hardship of having to come to terms with her reality she cannot help but let a few tears roll down her face and her voice shakes slightly as she continues her story:

“As a mother, I would not want the same for my daughters, I want things to be different, I want the chance to work and to be able to help my daughters so that they can be better than me. That they could have a profession and could be somebody in their lives. I would like my children to go out and to know about new things.”

Like many young Guaraní, Charito wants more opportunities for herself and her children, but is looking toward an uncertain future for her people and their culture, as she sees many of her peers drawn toward cities where they face discrimination.

Guaraní people arrived in the Bolivian Chaco from Paraguay before the Spanish conquest. They first fought against the Incas and after that came the colonization with all its implications.

Amongst a Guaraní woman’s greatest challenges in facing the modern world, Charito mentions the discrimination she feels on leaving her community. Discrimination for dressing or speaking differently or for not having a similar level of education to those who live in the city. “They make us feel smaller or inferior for being Guaranis. We do not speak Spanish well but neither do we speak Guaraní. They discriminate against us because we lack resources but above all, because of our lack of education.”

Many people take education for granted, but Charito does not. She wants to study Social Communication and her greatest dream is to have a video camera in order to capture the customs and traditions of the Guaraní people, so that the number of people who know about their dances, foods, dress and crafts gradually increases.

Charito says that the current generation of young people in her community lack a feeling of identity. They are caught between two worlds, since they do not completely fit in when they migrate to cities, but at the same time their own traditions are disappearing. Older women still dress in a tipoy, a long white tunic made of rough cotton with bands around their heads, painted cheeks and collars, in the traditional style. They speak perfect Guaraní and can weave and participate in other activities specific to place. However, the young women have started to copy different customs in their attempt to fit in with Bolivian life outside the community. They have abandoned traditional dress and whilst the vast majority understand Guaraní, they don’t speak it. This means many adults are regretfully seeing their language diminish. It seems the next generation will determine if Guaraní continues to be spoken in communities.

Living in Guirapayete is far from simple. Using a mobile phone or the internet appears futuristic. Just a year and a half ago they received basic services like water and electricity, but the worst of all this is the absence of projects and policies that would allow community members to keep their families united within the community instead of migrating to cities - quality education and access to healthy forms of entertainment. Customs are disappearing and in many cases it seems children living today in Guirapayete or one of the other 320 Guaraní communities in the Bolivian Chaco are destined to search for better chances and abandon their communities.

The effect this migration of the young has on communities is defined by the Director of the Social Sciences Faculty at the UMSA, René Pereira, as social or demographic aging. It leads to a large absence of youth in rural areas, leaving communities partially deserted and us wondering what the future holds for them.

For Charito, there is an internal struggle between being proud of her origins and her community, and wanting to offer her daughters the possibility of education and professional jobs. Her vision means giving them what they need to establish themselves as people and spend their lives doing what makes them happy - even if it means leaving her community.