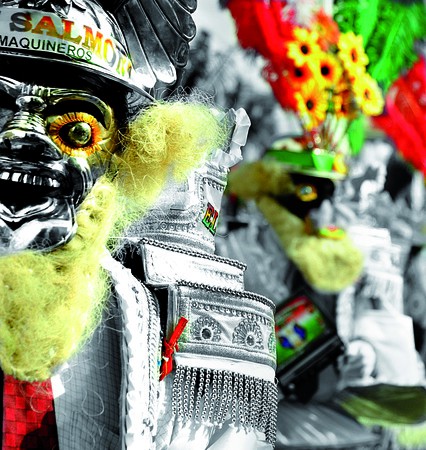 In La Paz the fiesta never stops: paceños never miss an opportuni­ty for a celebration and they know how to party hard. Rarely a day goes by when one of the city’s streets isn’t closed to host a festival or the Plaza del Estudiante isn’t filled with University students per­forming a dance for the crowd. It is cultured to say the least, and has a busy annual schedule of differ­ent artistic events, one of the most important of these being El Gran Poder.
Characterised by elaborately decorated costumes and an im­pressive parade of various dance groups, El Gran Poder is one of the most important traditional and religious celebrations in La Paz. The rituals performed annually at the festival offer a glimpse of both the traditional Andina cultures as well as those of the Catholic religion. It celebrates the work of different folkloric and dance groups from around Bolivia and is unique to, and celebrated by, the entire city.

El Gran Poder, literally “The Great Power”, is more formally known as La Festividad de Nuestro Señor Jesús del Gran Poder. As is ap­parent from its name, this festival focuses on the dedication by the participants to Christ as the second ‘person’ in the Holy Trinity, based on a painting of the Trin­ity held in the Templo de la Calle Antonio Gallardo. “We dance for the Catholic Church, for the Saints and we also dance for the Pachamama,” explained Eddie Sabala, a long-time dancer in the event and follower of the Catho­lic faith.

El Gran Poder also focuses on thanksgiving to the Pachamama, a fundamental figure of worship for Andina people. Each year on the Saturday preceding the Feast of the Holy Trinity, thousands of paceños gather on the streets to eagerly participate in the festivi­ties that are unique to the cer­emony.

El Gran Poder has been cel­ebrated annually in La Paz since the year 1939, when it began as a small-scale celebration focused around a candlelit procession. Over the following years local embroiderers introduced different folk aspects to the festival and these days it is so extensive that arrangements begin months prior to the day. When asked about length of time necessary to pre­pare his dance routine, Sabala commented that he is involved in dance practises for almost the entire year.

The importance of the day for paceños is clearly demonstrated in the preparations undertaken and the willingness of many par­ticipants to invest much of their earnings in masks and decorative costumes which can sometimes cost in the hundreds of dollars. The parade begins in the morning with the celebrations reaching their height by the early evening, eventually concluding around midnight. The event involves a diverse exhibition of dances led by the image of Christ as well as performances by brass bands, all of whom are dressed extrava­gantly in different costumes and masks.

There are a number of traditional Bolivian dances featured in El Gran Poder, each representing a different group and each with a particular meaning. Essential to the festival is the Morenada dance, which exposes the abuse of the black slaves and the inhumane treatment they experienced in the mines and vineyards. Some of the more well-known dances include the Diablada, a dance represent­ing the fight between good and bad, and the victory against the seven sins, and the Incas, choreo­graphed to celebrate the impor­tance of the Incan Empire in the years before the invasion by the Spanish.

For many dancers, El Gran Poder is an opportunity to enjoy performing and to entertain the crowd. How­ever there are still many individuals who believe that by dancing in El Gran Poder they are devoting themselves to the image of Christ, and in return for their effort, are ask­ing for salvation, forgiveness, good health and fortune. Walking the length of Calle lllampu and admiring the parade as it ad­vances alongside me, one of the things I notice that is most attrac­tive about this festival is its power to unify the many groups of La Paz. Rich or poor, white or mestizo, Aymara or Catholic, cultural bounda­ries are forgotten as the partici­pants endeavour to celebrate as one people. When questioned as to whether Sabala believes El Gran Poder is a unifying celebration, he nodded and went on to say "It unifies not only the cultures but also the classes within Bolivia, such as the upper and lower classes".

Before visiting the festival for the first time I had imagined the sort of costumes that would be on show in the parade. However after actually attending the event I was taken by surprise at the level of creativity that each costume possessed.

Unfortunately, while the costumes exhibit a great beauty, they are also the focus of some criticism, as some believe the festival has forgotten it's religious origins and is becoming more com­mercialised. Some pacenos are beginning to complain that the costumes are now mere rep­resentations of the individual's wealth and prestige. In contrast to Sabala's idealistic vision of a festival in which boundaries between classes evaporates, this paints a picture of an event that can be used to enhance class divisions. Marisol Medina, a pacena who has attended the festival for many years believes "Religion isn't as important any­more, now the most important part is the ostentation of the costumes...the dancers use jew­els made from gold and display them on their arms, hands and ears and expensive clothes. It is the way the dancers show they have a lot of money".

Despite the criticism that is begin­ning to arise regarding, for some people, the commercialisation of the festival, like any cultural fea­ture it is inevitable that the event will evolve and change over time. While it may not be the small religious celebration it once was, it is still an opportunity to celebrate the coming together of the different cultures in Bolivia.