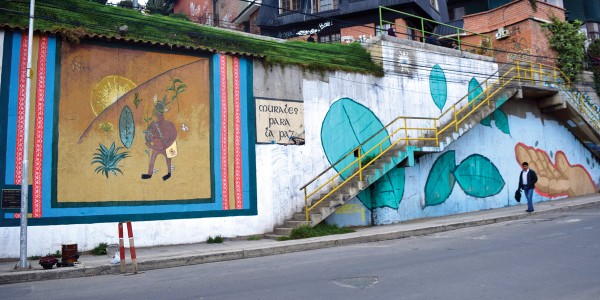 When Martha Cajías' mural entitled "The Kallawga" was vandalised in February, several people took to social media to publicise their outrage. The mural located on La Avenida Sánchez Lima, was covered by a sheath of garish blue paint and a political slogan by members of the Satucos - a political action group run by ex-assembly member Gustavo Torrico. One user tweeted that they couldn't destroy the mural "without suffering the consequences". However, when days later a modern interpretation of the traditional Three Wise Monkeys was also added, the reception was surprisingly positive. A photo was posted on the Sopocachi Facebook page with the caption "Si al arte urbano no a la política" and received almost 150 likes as well as comments continuing to criticise the political propagandists. However one group of inspired artists wasted no time to start the restoration. The project, led by Neddy Pacheco, was completed in 5 days despite the painstakingly slow process of scraping off the under-layer of paint that caused the worst of the damage.