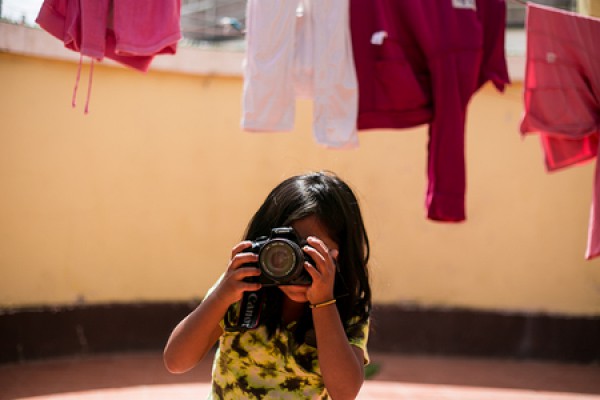 “Look into my eyes,” says Amina from Afghanistan in Girl Rising, “Do you see it now? I am change.”

This documentary film has inspired people like Viviana Rodriguez, who is a Girl Rising Ambassador in Bolivia, to create education campaigns around the world. In 2013, Rodriguez created Niñas Autoras de Su Vida in La Paz, an alternative education project for girls ages 9-19 who are vulnerable and at risk of dropping out of school. The goal is
“to support girls who have been victims of human trafficking, domestic violence, rape, suffer from early pregnancy, or have been homeless,” she says, “leading them to drop out of school or never enroll.”

Although Rodriguez hopes to work with a wide range of girls in vulnerable situations, currently, Niñas Autoras de Su Vida works with girls from the Marcelina Children’s Home, a refuge for vulnerable children that belongs to the Alalay Foundation. From photography classes to workshops on graphic design and entrepreneurship, the girls in the Marcelina Children’s Home, receive an alternative education from Rodriguez and her team of volunteers on a weekly basis.

“Our dream is to transform an old school bus into a classroom with seats, a chalkboard and a library. In this way, we hope to reach girls from other communities as a mobile project," Rodriguez says.

In the future, Niñas Autoras de Su Vida aims to extends its reach to Quechua-speaking girls from Potosi, who are living on the streets in La Paz. These Potosinas can rarely speak Spanish and run a greater risk of becoming victims of sexual exploitation or human trafficking. In December, Rodríguez worked for the first time with a group of Potosinas in the city, organizing drawing and math workshops in different plazas throughout La Paz.

At present, however, the program works with volunteers such as Pamela Vargas Fuentes, a psychologist who leads group activities with the girls, from icebreakers to name games to exercises in imagination. “The group dynamic generates an environment that motivates learning and awareness of real issues,” Vargas said. “These girls have an amazing capacity to love and are open to learn, grow and improve.”

Another volunteer, graphic designer Vivian Tapia, hosts a “personal logo” workshop so that the girls “will create a visual element that reminds them to accept and love themselves, identifies their strengths and weaknesses and shows what makes them unique. “Like the best logos out there,” Tapia says, “these girls can also stand out and be different.” The workshop serves as a tool for self-awareness and acceptance, or a path to self-discovery.

Communications expert Blanca Gonzales also volunteers with Niñas Autoras de Su Vida, teaching practical financial skills and facilitating an interactive money-spending game. Gonzales divides the girls into three groups and hands each group 1,450 fake bolivianos.The girls must then choose whether to buy fake clothes, food, movies or cars that are available for purchase. After the shopping round, each group analyzes its spending habits, paying close attention to what the girls spent money on and to how much they saved.

According to Gonzales, “most of the girls are self-conscious enough to use money to cover their basic needs, education, and save for emergencies.” However, Rodriguez was “surprised to see some girls buy clothes and shoes instead of milk, water or food.”

By the end of the workshop, the girls are invited to think about personal finances and how they will make enough money to support themselves when they leave the Marcelina Children’s Home.

All of these skills contribute to what Niñas Autoras de Su Vida hopes to accomplish, which is to provide an alternative education for girls who are outsiders to the formal education system. Girls with traumas, for example, who have suffered from domestic violence, rape or early pregnancy and require individual and specialized attention. The goal is for these developing women to continue learning and overcome their past.

“Our team has largely grown through word of mouth and social media. Each volunteer brings a volunteer,” Rodriguez said. “Some of the girls in the group are enthusiastic about eventually becoming volunteers, too.” For them, the program is an opportunity to learn how to create a flexible curriculum and provide real-life skills to real girls in the city.

"They are not professors or pedagogues,” Rodriguez says, but that’s not a problem. “Each volunteer simply teaches the way they would have liked to be taught."