Get your moto running 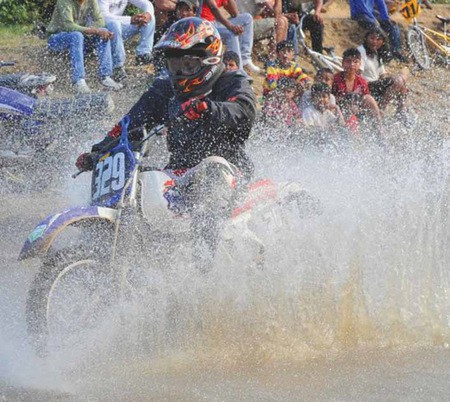 In spite of the rally's remote location in the poorest country in South America, it's all made possible through a great love of the sport.

The motorbikes came on the backs of pickup trucks, towed behind taxis, and ridden from towns and villages both nearby and far away. From rattling, rusting Honda 125s that wouldn't be allowed on the road in any Western country to gleaming KTM 450s that would be the envy of serious motocross riders all over the world, they arrived in the hundreds. The small town of Comarapa in Bolivia's central highlands filled with their smoke and noise, with the smell of gasoline and engine oil, with riders, spectators, dust, beer cans, and cigarette butts, as over 200 competitors converged for the start of the 11th annual Rally de Motociclismo, Bolivia's national motocross rally.

I happened to be at the rally, held on the 5th and 6th of November, 2011, purely by chance. The day before the start of the race I was hitchhiking unsuccessfully west from Santa Cruz on Bolivia's desolate Highway 4—much more hiking than hitching, you could say—when a beat-up Toyota Corolla finally stopped. It was going my way, so before I knew it I was crammed in the back seat next to a guy wearing no trousers, chewing coca leaves, passing around a bottle of rum, and sharing bad Bolivian cigarettes. "We're on our way to a motorbike rally tomorrow," the three occupants managed to tell me in Spanglish. Why of course I'd like to join you, mis amigos! So we sped towards Comarapa, past the dusty villages and the old donkeys, as the sun set over the Bolivian Andes and turned the towering cacti a brilliant gold.

After I presented myself at the starting line as a journalist from Australia, I rode with the rally organisers to the town of Chilon, where they would be setting up the finish line at the end of the second leg. From the back of the pickup truck I had a view of the harsh landscape the competitors would be facing: a cactus-dotted desert, rising in every direction into isolated mountains as it baked under a relentless, inescapable, blistering sun. Daunting as it may have seemed, the landscape is just one reason why this rally is the best in Bolivia, organiser Grover Vargas Párraga told me. Párraga, in his second year as organiser of the event, said that you can find everything on the 250-kilometre, six-leg route. "There is a huge change in elevation over the 250 kilometres, from 1,800 metres to over 3,000 metres," he said. "The highest point, through Siberia on the second leg of the race, is usually cold and very foggy, while at lower altitudes it can get extremely hot." Having both bitumen and dirt tracks to ride on, rivers and bike-sized potholes to navigate, and stray dogs, goats, and over-eager spectators to dodge, this rally certainly provided its fair share of unusual challenges.

Faced with such a gruelling rally course, it's no surprise that, out of the 219 competitors that started in the four categories this year, less than 150 crossed the finish line on the second and final day. When one also considers that the competitors ranged from first-time entrants to the top riders in Bolivia, from age 16 to well into their thirties and forties, and that bikes in such various states of repair were ridden, the numbers make even more sense. But Párraga says that as the event receives more publicity both nationally and internationally, there's hope for an even greater number and variety of competitors. "Last year we had only one woman enter, this year we had two, and next year we hope for many more," he said. "As the rally becomes more widely known, hopefully we can have more competitors and open more categories in the race."

As we travelled from town to town setting up start and finish lines, I noticed how the rally breathed life into otherwise quiet, poorer parts of the region, into towns and villages that would usually have little attraction to tourists or visitors. Hotels filled with people, bars and restaurants stayed open late into the night, and dusty streets turned into vibrant markets selling local fruit wines and liquors, honey, and hand-woven fabrics. Locals set up barbeques in the town squares and sold street food, and bands played traditional music as spectators flocked in to cheer on the riders. "This is one of the great things about this race," the organisers told me. "The small towns help with money, prizes, or meals for the people working at the race, and in return they get in influx of people who stay in their hotels, spend money, and boost the local economy. It's really a win-win situation."

What struck me the most about Bolivia's Rally de Motociclismo, however, wasn't the beautiful landscape or the incredible rally course. It wasn't the transformation of small towns into places crowded with food stalls and markets, or the images of exhausts tied on to ageing motorbikes with rope and string, of hasty repairs made on the side of a dusty track. What struck me was how, in spite of the rally's remote location in the poorest country in South America, it was all made possible through a great love of the sport. Whether it was hundreds of competitors travelling from all over the country—and even the USA and Europe, Párraga told me—to compete for a maximum prize of 2,500 bolivianos (or approximately AU$350 and US$360); or whole families of spectators lining the track, climbing on top of boulders, and seeking shade under trees to watch the riders pass; or the more than 30 volunteers, including the directors of the rally, who squeezed into overcrowded taxis and endured freezing rain in the back of pipickup trucks just to get to the end of the leg, this rally wasn't made possible by huge corporate sponsorship or international interest, but by the determination of those involved.

And so, as I drank and danced and talked with the winners after the finish in Comarapa, they seemed remarkably uninterested in the money and trophies they would receive. Instead, they spoke of Bolivian motocross becoming more popular internationally, and of the Rally de Motociclismo hopefully attracting more competitors, spectators, and media coverage in the years to come. "I don't care about winning or losing, or about prizes," one competitor told me. "But I would do almost anything to tell the world about Bolivian motocross."