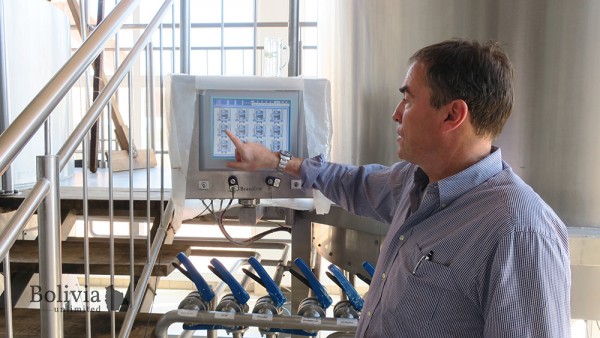 Formerly dominated by domestic brew behemoths Paceña and Huari, Bolivia is experiencing a beer renaissance as of late, with small craft cervecerías such as Saya, Niebla and Corsa springing up all over the landscape, from Sucre and Cochabamba to La Paz and Santa Cruz de la Sierra. And now there’s another contender in the ring, one that’s producing suds reminiscent of his homeland. Prost, the brand name of master beer-maker Guido Mühr’s Sabores Bolivianos Alemanes company has, in two and a half years, catapulted itself into the Bolivian beer market with distribution to most of the country’s major cities and their outlying areas. It’s a labour of love for Mühr, 52, who studied beer-making in Munich and worked at the Holsten brewery in Hamburg before he responded to a mysterious ad in a local trade publication in 1992 that would dramatically alter the trajectory of his life. ‘I read about an offer for a new brewing plant in South America,’ Mühr says from his office at the Prost brewery on the outskirts of Santa Cruz. ‘It said only ‘South America.’ I thought it was in Buenos Aires or Rio de Janeiro, but it was indeed in Santa Cruz de la Sierra.’

Shortly thereafter, the then-27-year-old Mühr was on his way to Bolivia, a country he knew little about on a continent he had never visited. ‘I knew no Spanish,’ he recounts. And there was 'no Internet, and it was only phone calls and letters – written letters! It was quite different. It was very tropical… very, very different from Europe or from Germany. My first impression was “Oh my goodness!”’

But Mühr thrived in the tropical environment, working for Paceña for seven years before it was acquired by the Argentinian beer company Quilmes. In turn, Quilmes was purchased by the international beer conglomerate AmBev, which then offered Mühr the opportunity to manage two breweries and a Pepsi bottling plant in Montevideo, Uruguay, in 2008. So Mühr, who by this time had started a family with his Bolivian wife, packed his bags and headed east.

It’s a labour of love for Mühr, who studied beer-making in Munich before he responded to a mysterious ad in a local trade publication that would dramatically alter the trajectory of his life.

But Mühr was becoming dissatisfied with the corporate life. ‘Every brewmaster in this life thinks about having his own brewery, making his own beer,’ Mühr says. ‘If you, for nearly 20 years, have to think only in terms of cost reductions and how to make the product cheaper every time, then you start to dream about doing your own business.’

And so Mühr filled his last Quilmes keg in 2012 and laid low for a year, formulating a business plan for his next endeavour. With an eye on Santa Cruz’s explosive population growth, cheap labor and little-penetrated beer market, Mühr and his family returned in 2013. He immediately made contact with investors from local pubs and restaurants. Brewery construction started in 2014, in a near-deserted industrial part far north of the city, under less-than-ideal conditions. ‘We weren’t connected to electric energy until March 2015, so we nearly built the factory without it,’ Mühr says, wincing, as he stands outside his factory in the intense tropical heat. ‘We started brewing in June 2015 – three months later.’

Prost’s initial production run was only 1,000 litres per month, but in the last two and a half years it’s now producing 35,000 to 40,000 litres monthly – still not enough for the company to break even financially. ‘But that’s OK,’ Mühr says. ‘We are increasing every year from between 25 and 50%. Fortunately, I have long-term-looking partners and not short-term, cash-bar-searching partners.’ And there’s a lot of room to grow: The brewery’s maximum yearly capacity is 8 million litres. ‘But if we reach that number,’ Mühr says, laughing, ‘I will be drinking caipirinhas en la playa.’

The Prost brand boasts five lines currently in production – its signature premium lager (just about a perfect beer for the infernal cruceño climate), a Weiss (wheat), a dunkel, a quinoa beer and a winter and a summer ale. Mühr plans to keep the distribution strictly in-country, with the exception of the quinoa beer, which he plans on making available in Peru. He’s also busy brewing a new line, an IPA, which will be available later this year.

‘Every brewmaster in this life thinks about having his own brewery, about making his own beer.’
—Guido Mühr

Prost is a small business, with only 12 full-time employees staff, and the distribution and sales are outsourced to trusted partners, allowing Mühr to concentrate on what he really loves: brewing good beer. ‘Every brewmaster at least dreams of having his own brewery, big or small, but to do this﹣’ he says, gesturing at his brewery, ‘that’s always been my dream.’

But even with this achievement, Mühr, who is tall and gangly with dark black hair and a face faintly lined from living under the tropical sun for years, is also thinking ahead. ‘I wanted to [start the Prost brewery], and I want to [run it] for the next 10, 15 years,’ he says. And he’s also looking beyond Bolivia, into other markets – but he’s keeping his lips sealed about that plan, at least for now. He does reveal one thing, though, as he stands proudly in front of his brewery: ‘This should only be one of several projects,’ he says, smiling.