FUTSAL: THE MINIATURE VERSION OF FOOTBALL 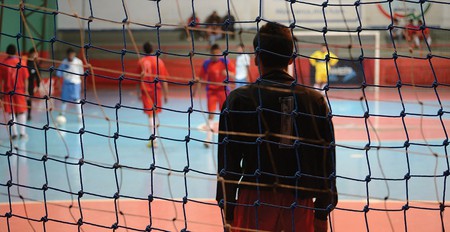 Bolivia is known for not qualifying for the FIFA World Cup since 1994, when it was eliminated in the group stage. The country is far better known in the world of futsal, or indoor football, coming third in the 2003 AMF Futsal World Cup. In fact, in La Paz, the sport is more popular than conventional football. Part of this lies in the geographical layout of the city, which has left La Paz with few open or flat green spaces. Indoor futsal arenas can fit neatly into this city’s unique urban sprawl. With a cheap entry fee and vibrant women’s league, it makes for a dynamic complement to Bolivian football.

However, unlike Bolivia’s Siete Ligas, Futsal is not a standalone sport with its own culture and professionals. Most players aspire to play in the upper echelons of conventional football. For example, Marcelo, a 16-year-old who plays for the AGF team, says, ‘I play futsal to improve my skills and control of the ball for when I play on the 11-a-side pitches, because on a five-a-side pitch there’s no room to run around, and you develop skills.’ It’s certainly true that like all five-a-side football, strength and speed count for little and it’s the tricksters that are king. Though you’d be mistaken in thinking this is conventional five-a-side. Most of the rules observed in the UK are thrown out of the window: players can enter the goal circle, goalies can exit it—indeed, the goalkeeper from the Illimani team often ventures out with the intention of scoring—and the goalie isn’t allowed to take the ball from the net with his feet.

But more than the rules, the real point of departure is the money involved. In the UK, teenage football, Sunday league football or five-a-side leagues normally consist of groups of friends. Bolivian futsal, on the other hand, has an entry fee for spectators (most of whom aren’t related to the players), the league is sponsored by international brands like Coca-Cola and Powerade, and there are digital scoreboards—a relative rarity in Bolivia.

The fan demographic is a point of interest too. Jaime, a regular at futsal matches, says that ‘it starts at six, so many come after work to wind down before going home’. He goes on to describe the working-class character of futsal: ‘The entrance fee is cheap and it fits in with work hours, unlike conventional football, which is much more expensive.’ Indeed, in the stands was a group of six taxi drivers in their uniform and, across from them, were two construction workers in overalls. Furthermore, the futsal arena of La Paz is situated near Plaza San Pedro and directly opposite the queue for the buses going to Ciudad Satélite (a district of El Alto), which by night stretches across two blocks and can take over an hour to negotiate. Jaime explained that many alteños pop in to watch a few matches after work until the queue dies down.

It’s an enjoyable evening, watching teenagers playing fast-paced five-a-side while their younger siblings play their own matches in the stands—and run onto the pitch at halftime to live the futsal dream for five minutes before the players come back. It certainly felt like community sports at its best, with local kids playing and spectators from all walks of life turning out to cheer them on.