FROM THE STREETS TO THE RADIO 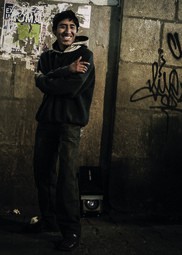 ‘I don’t only dance, I entertain’.

Franz Rodrigo Chavez began his career singing on the micros of La Paz ten years ago. However, this was not as successful as having his own corner near the bustling Prado. Now you can find Franz lighting up Calle Comercio with his blasting speakers and smooth moves.

Five years ago, Franz had to start dancing in the street in order to earn a reliable source of income. Although he still lives with his parents in La Paz, he wants to rely on them less and be able to support them more. This 19-year-old spirited joven dances all day, from the morning up until his speaker battery dies in the evening, earning enough bolivianos to keep himself going.

‘It seemed weird to people because I was the first time they had seen a man dancing as if he was at a party.’ Franz is not yet bored of dancing to the lively beats of cumbia, and he continues to attract a crowd. ‘Cumbia makes me happy’, he says, performing to groups such as Sin Control and Nene Malo. Christmas and other festivities prove to be the best time for busking, but on the eve of Corpus Christi, only a two-boliviano coin lies in his hat.

‘I don’t want to continue dancing in the street for very long’, Franz says. He thinks he will leave this job and in the future dedicate himself to being a radio presenter. Already Franz has worked with his friend's Internet radio station, Salta Tropical, claiming that ‘my experience on the radio has enhanced my street performance’.

Finding work experience to succeed in this career path is proving difficult, but there are institutos where Franz can learn about this occupation, and the money from street dancing will hopefully pay for the opportunity.

‘I don’t only dance, I entertain’, Franz says. As people rush by, glancing at this young man’s moves, he longs for them to drop a coin into his hat. There is no routine that he follows: ‘It’s all in the moment, without control.’