From the Shores of Titicaca to Sydney 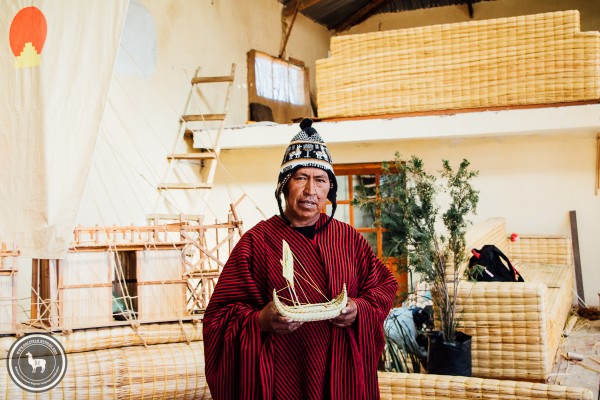 Floating on the shimmering surface of Lake Titicaca, an imposing boat made of yellow totoras matches silhouettes seen on ancient pottery by Incas and Egyptians, drawing a striking contrast to the motorized cars and hints of 21st-century life that abound nearby. The boat docks near a white barn, home of Fermín Esteban’s museum dedicated to his family’s role in crafting boats used by modern explorers in their expeditions across oceans.

Balsa building, or hand-crafting reed boats, has been a trade passed down through generations since pre-Incan times. Once popular vessels in South America, small ships called yampos ferried occupants between coastal towns long before roads connected them. Fermín makes these two-person boats out of reeds harvested from Lake Titicaca, the largest lake in South America, straddling the borders of Peru and Bolivia. Each boat has a certain lifespan –  the longer they remain in the water the more water they absorb, eventually sinking due to the weight. The reeds are harvested and hand-woven  with minimal tools and tied with rope to form cylinders that surround one another. When placed in water, the reeds expand and the string tightens, sealing the hull.

Huatajata, Fermín’s home, is a small coastal town on a busy road halfway between Copacabana and La Paz. Since 1969, it’s been known for its expert boat builders. Back then, an Italian, Carlo Mauri, arrived looking for men to fly to Morocco to construct a 12-metre-long reed boat that would sail across the Atlantic to Barbados. Before Mauri, the largest boat created on Lake Titicaca was only eight metres  long. Mauri and his partner, Norwegian adventurer Thor Heyerdahl, wanted to recreate  the large balsas of ancient civilizations to test their ability to travel long distances. Fermín’s father, Paulino, placed first in the competition that Mauri held to test the skill of the town’s boat builders, leading to his role in building seven different boats for Heyerdahl and other explorers.

Fermín grins as he relates a well-remembered story about his family’s relationship with the renowned explorer. When Heyerdahl was building the Ra II, a boat that used Iraqi papyrus, Paulino’s boat-building team tried to cut him out of the project, as he was getting paid more. When Mauri and Heyerdahl called for the same team that had built the original boat, the Ra I, Paulino’s partners sent word saying Paulino was ill. Heyerdahl’s response was simply, ‘When he gets healthy, send him.’

In his museum, Fermín regales visitors with tales of journeys alongside his father to build these impressive vessels. He learned how to build balsas from his father, and has already passed the tradition to his 27-year-old son. But Fermín rarely makes vessels for adventures anymore; barely anybody does. Motorized and wooden boats have long replaced the less durable balsa. Fermín mainly sticks to weaving reed boat sofas, used for decoration in hotels and restaurants, as well as miniature reed boats and llama figurines to sell in his museum.

However, there are those who keep the tradition alive. Near Plaza Velasco in La Paz, the smell of reeds permeates the air and bundles of long yellow cattails mark the building where American Phil Buck is building his dream. In 2003, Buck and seven volunteers launched a reed boat, the Viracocha II, from the shores of Viña del Mar, Chile, hoping to sail to Sydney, Australia. Their plan was cut short by steep waves and unfavourable winds that damaged the ship, and the expedition ended on Easter Island 76 days later. But today in La Paz, Buck is working with shipbuilders from Huatajata to build the Viracocha III, for a journey from Arica, Chile, to Sydney. As his team builds the new craft, Buck hopes to draw as many curious visitors as possible to his workshop, part of his deal with the city of La Paz and the official channel of Bolivia, BoliviaTV, which has the Bolivian rights to screen a program about the adventure. ‘We want to inspire, especially younger people, to go out and accomplish their own goals,’ Buck says.

Come September, the ship will be transported to Chile and assembled. An international team will man the ship, but the boat’s hull will be created solely by Bolivians. One of them, Erik Catari, will join Buck’s crew on the six-month journey.

Buck, 52, styles himself as a ‘professional adventurer.’ He has lived in La Paz since October 2015, when he began this project. In the corner of Plaza Velasco, Buck and his Chilean partner, Valentina Muñoz, describe their vision for the journey they hope to take in January of next year. The ship will be 18 metres  in length and seven metres  wide, requiring 2.5 million reeds for the hull alone. Their 10-member crew will bring people from at least seven different countries together at sea for half a year. Expert knot makers, fishermen, doctors and seamen will all work to bring the sail-powered ship 10,000 nautical miles across the sea, the farthest an ancient-style reed vessel has ever travelled in documented history.

Their goals for this endeavour are simple. First, this is a scientific expedition. Buck hopes to add to the theories that South Americans may have gone further in balsas than ever  imagined. While his route specifically is not one that may have been taken in the past, the possibility that ancient boats could travel this distance will open up theories of cross-continental contact that may have been previously dismissed.

There is a hint of something crazy, a little dangerous and quixotic in Buck’s eyes.

Second, Buck imagines his efforts will embolden and educate young Bolivians and South Americans, proving to them that something so improbable is possible. Buck will film and edit all the BoliviaTV footage himself before he sends it to the channel via satellite, and Bolivians will be able to watch his journey as it happens.

Lastly, Buck’s adventure is about preserving and sustaining a tradition that has died down in the past decades. He hopes that his team will be able to exercise their knowledge of building balsas once again, in the process educating the younger members of the team in this traditional craft.

‘South America is losing its tradition, and Bolivia somehow keeps hold of it,’ Buck says. ‘It’s amazing that Bolivian still retains its culture.’

On the the business card for Buck Expeditions, Buck’s company, is an image of the Viracocha II floating peacefully on blue waters. No hints of technology to be seen, the hand-woven sail billows in the wind and the totora hull floats on the water. It is an unimaginable sight for the 21st century. There is a hint of something crazy, a little dangerous and quixotic in Buck’s eyes as he watches his team work with the same type of reeds their great-grandfathers used centuries ago.