From pharmacy to pharmaceutical manufacturer 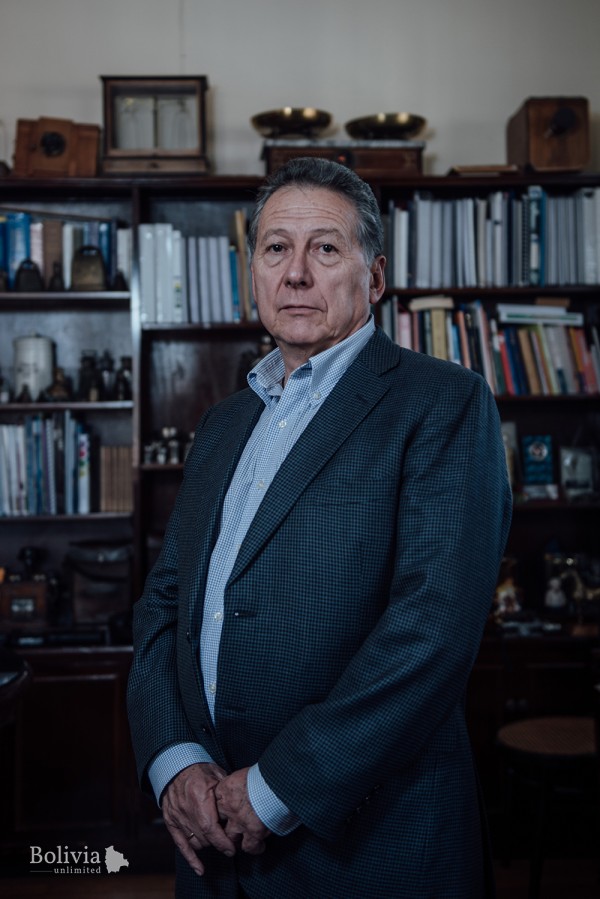 Back in the 1950s, La Paz was a small city where practically everyone knew each other. Nearly all the country's decisions – political, economic and social – took place in what is known today as the Club de La Paz, located on Avenida Camacho. There, the Bolivian elite of that time would meet, spend time together and hash out the country’s future. Raúl Crespo Palza, one of the few Bolivian pharmacists of that era, opened a pharmacy nearby and named it El Indio. Located on Calle Colón near the Club de La Paz, it would later be renamed Farmacia Santa Cruz in honour of Crespo’s cruceña wife, Neysa Vasquez.

For 15 years, the pharmacy, which also became an important meeting point, witnessed the country’s political and economic crises: the 1952 National Revolution that would give rise to the first MNR government, followed by military governments, all of which would lead to the fall of the national economy in the 1980s. This is when the UDP political alliance, headed by Hernán Siles Suazo, took the reins of the Republic of Bolivia. Hyperinflation followed, and with an absence of foreign currency and a shortage of medicine, Farmacia Santa Cruz couldn’t provide medical supplies to the citizenry. But the crisis provided an opportunity, and Crespo opened a laboratory to manufacture his own pharmaceuticals. His son, Raúl Crespo Vásquez, tells me that his father started out by grinding antibiotics and mixing syrups by hand in the absence of the necessary equipment.

Learning from his father’s trevails, Crespo Jr. studied agronomic engineering and originally found work in the agricultural industry. He spent his days in the countryside, where he bred animals and founded a small jam factory. For legal reasons, and to be able to commercialise his products, he needed another factory in La Paz. His family owned property in the San Pedro neighbourhood on Calle Nicolás Acosta. He located his new factory there, and now it’s the location of Laboratorios Crespal S.A.

Crisis provided an opportunity, and Raúl Crespo Palza opened a laboratory to manufacture his own pharmaceuticals.

It took six months for Crespo Jr. to become completely involved in the pharmaceutical laboratory. Farmacia Santa Cruz, then still led by Crespo Sr., made sure the family was fed  and helped finance the new laboratory. Eventually, Crespo Jr. took over its administration and management. Laboratorios Crespal’s initial production run included Sorojchi altitude-sickness pills, which most visitors to the city will be familiar with, and the Carmelinda cosmetic-product line. Through the years, the company has kept growing with new products regularly launched.

Laboratorios Crespal’s Sorojchi-pill formulation, which combats the symptoms of males de altura, dates from the 1960s and is the product of a rather atypical partnership with the then US Consulate. The US Peace Corps, an American volunteer program providing social work in Bolivia and elsewhere around the world, requested that Crespal Sr. formulate a remedy for altitude sickness, which was adversely affecting the organisation’s Bolivian staff. Crespo Sr., who died in 1996, began experimenting and conducted clinical studies until he formulated the product we know today.

The Sorojchi pill dates from the 1960s and is the product of a rather atypical partnership with the then US Consulate.

Strong demand for the Sorojchi pills was immediate, especially from tourists, and pharmacies in other high-altitude tourist destinations soon began to order the product. Exportation to Peru began after a young man named Armando, from Puno, started bulk-purchasing the medicine to sell in Peru in order to finance his university studies. Crespo Jr. realised that there was demand in the neighbouring country and started to distribute them to Cuzco, where they were particularly popular with tourists who hiked the Inca Trail. Laboratorios Crespal now has a branch in Peru, and plans to export its products to Ecuador and Mexico.

Laboratorios Crespal’s Sorojchi pills are also becoming well-known outside of South America. In 2016, the company received a call from the government of Tibet, inquiring about the distribution of the altitude-sickness pills in its capital, Lhasa. There have even been two heads of the Catholic Church who have taken the Sorojchi pill: Pope John Paul II, when he visited La Paz in 1988, and Pope Francis in 2015. Sorojchi pills are advertised as the most effective product to alleviate the symptoms of altitude sickness for tourists in extremely high-altitude cities such as La Paz and Cuzco.

Laboratorios Crespal, all the while, keeps growing. In 2014, it opened at modern pharmaceutical plant in El Alto. For the past 30 years, Crespo Jr. has been managing it, and it is listed on the Bolivian Stock Exchange. But all these changes do not mean that the company ceases to be deeply rooted in paceño traditionalism with a family legacy that embodies everything that is Bolivian.