For 27-year-old actor Ronald Millares performing is a way of life. In his continuous pursuit for artistic independence, he has found freedom on the streets—his perfect stage—acting as a chained silver soldier—his perfect role.

Amid the noise and the ruckus of El Prado’s many bustling streets, one peculiar-looking fellow is causing quite a commotion among passersby going to and from the bridge by the Reloj de la Perez. Decked out in old worker's overalls and high-top shoes, hands and feet bound in papier-mâché chains, and painted entirely in grey, the figure looks as if he had jumped out from the concrete wall behind him. A human rock atop an improvised pedestal, he waits in silence, only to break his still form with the clinking of a coin.

There was never really much expectation in Ronald Millares’s artistic capability. Growing up in Tarija, the fifth of ten children, Millares’s early years saw him as a timid boy. He was an introvert, who rarely spoke in class and hated being in front of many people. One unforgettable incident, Millares recalls, was when a teacher asked the entire class to dance. Determined not to participate and desperate to be left alone, he resorted to the one thing he knew would definitely win him his case. He cried.‘When I was a boy’, he says, ‘no one could ever make me dance’.

At nine years old, he began learning his father’s trade as a plumber. With his earnings, he was able to support himself, but when he started university he had to find more stable work. And so he became a hotel mesero and a gasboy, among other occupations—not once showing any interest in singing, dancing, or even being the focus of attention.

For this reason, no one could have predicted the change in Millares’s outlook when, at seventeen, in the middle of his psychology studies, the once-shy young man found himself longing to become a performer—an actor to be precise. ‘I think what really inspired me to make theatre a lifestyle was seeing the work of Teatro De Los Andes’, he now says. ‘That group revolutionized Bolivian theatre during the early ‘90s.’

After finishing his studies, Millares soon found himself participating in acting workshops and theatre productions across Bolivia. He even formed his own theatre group, Teatro Tres Cuartos. And although his family did not support his decision at the time, Millares decided to fully devote himself to the acting craft by the time he was twenty three.

Theatre thus became life for Ronald Millares. Beyond the curtains and the applause, he stretched his stage out far beyond the walls of the salas and into the streets. He began honing his passion for acting while making a living by playing the same character over and over again: the chained soldier, the silver estatua viviente .

‘Being an actor is 80 percent public relations, and in the streets, people are never conventional. It is not the same in all areas. It’s not like in theatres where people enter, conditioned to see a play’, Millares says. ‘Sometimes, they poke me, touch me, make fun of me. So I have to be alert and sense what is going on around, even if I am not moving. If they try to do something bad, I firmly put them in their place. But it is because I like interacting with people. Sometimes, they talk to me. They tell me their stories. And I learn a lot. So, even though I learned almost everything in the theatre, the street is where I get the artistic experience.’

‘There is not enough appreciation for street artists in Bolivia. Only for mainstream actors like those in television and films’, says Alvaro Ramos, a colleague of Millares from Teatro del Oprimido and a social worker at the San Pedro Prison. ‘The general view is that street artists are hippies who do drugs, or they feel bad and think, “Oh, we must give them money”. It is tough for unknown artists to get recognition or even small spaces to perform in the street. They always need permission from the government. It is great for artists who can live from what they like, but it is hard.’

La Paz, in particular, is not very hospitable to street performers, according to Millares.
‘I earn more or less 100 to 150 bolivianos in this city on a good day’, he says. ‘But it is only in La Paz where the government charges artists for using public spaces. They charge me Bs 1.50 per square meter, which I have to pay at a bank for every day that I perform. The best way to avoid charges is to have a friend working within the government. Corruption is everywhere.’

At the clink of a coin, the silver man turns slowly—as if instinctively—towards the little girl who dropped it into his box. He opens his eyes and reaches his hand out, gesturing her to come nearer for a handshake. The little girl smiles widely as he whispers his thanks to her before becoming motionless once more.

‘What makes a Latin American artist unique is the creativity, the originality’, says fellow actor Juan Jose Ameller. ‘Bolivian actors don’t have that kind of formation. We don’t have formal classes for people who want to become actors. We work with what we have. We get books, we search for workshops. We create our own stories, our own style. We do it ourselves, because no one else will do it for us.’
Dusk draws near. But though it seems the spectacle is not yet over for a few curious people passing by the bridge, Millares decides it is time to break out of his chains, retrieve the day’s earnings, and head to where home is for the night.

‘If I couldn’t be an actor, I would die. It would be like becoming a cripple, not being able to do this kind of work. But I don't like fame’, he says, without a hint of pretense in his voice. ‘Fame is superficial. Fame or money does not necessarily mean success, because success is being content with yourself. It is being able to go back home and to give thanks to God for giving me the opportunity to do what makes me happy. In that way, I believe I am successful.’ 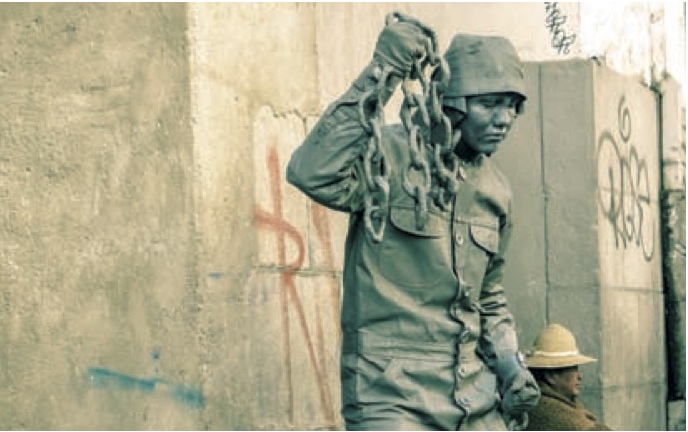 Fresh from a role in the recently ended No Salgas (Don’t Go), a local theatrical production on human trafficking by Bolivian director Freddy Chipana, Ronald Millares will soon be working on a project with the Red de Teatro del Oprimido. He will also be performing in theatre productions in the Ferias Dominicales del Prado, organized by Elvis Antezana of ARLEQUÍN Productions, before heading to the International Festival of Theatre, Arts, and Popular Culture in Chiclayo, Peru.