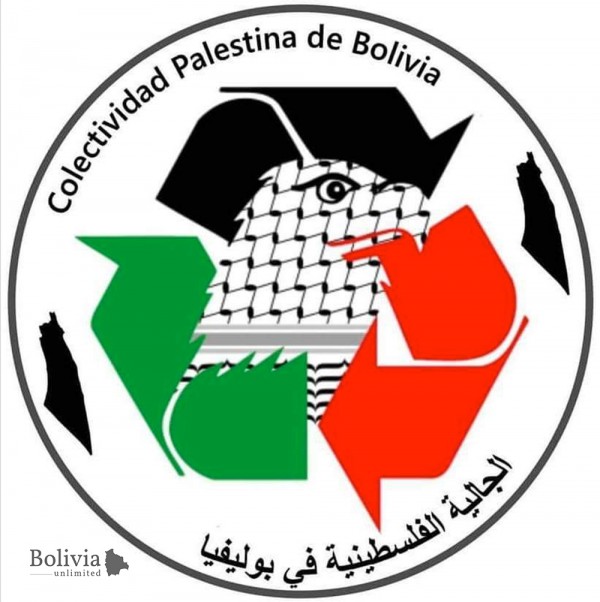 The Palestinian diaspora in Bolivia

In 2018, to no small fanfare, the Bolivian government announced the official opening of the Palestinian Embassy in La Paz. The move was heralded by Bolivian President Evo Morales as signaling a new era in diplomatic relations between the two countries, paving the way for ever closer ties and mutual support. However, it also spoke to a far longer history of Palestinian presence in Bolvia which has resulted in upwards of 15,000 people of Palestinian descent living in the country today.

The history of the Palestinian community in Bolivia begins at the turn of the 20th century, at a time when Palestine was still under the dominion of the Ottoman Empire and ruled from Istanbul. Around that time, young Palestinian men began arriving in Latin America, travelling by boat to reach the great port cities along the continent’s Atlantic coast, especially in Argentina. These immigrants were usually the elder sons of Palestinian families, literate and well educated, sent off in search of economic opportunity and hoped-for prosperity.

Often whole clans would travel this way, with men accompanied by cousins from other branches of their extended family. For example, the al-Hadwahs, a notable family from Beit Jala, then a small farming village rich in olive groves and orange trees perched on the hillsides northwest of Bethlehem, sent six of their sons to seek their fortune in the New World.

Along the way, Arabic surnames became Hispanicised. Sabbagh changed to Sapag or Sabag, Salamah to Seleme or Salame. Hazboun, the surname of one of the largest and most notable families of Bethlehem, morphed into Asbún, under which name the family’s most famous son, Juan Pereda, would become President of Bolivia in 1978.

Sometimes immigrants would adopt completely new family names. David Mansour changed his name to Mendoza in honour of the Argentine city in which he first settled before he eventually moved to Vallegrande, Bolivia. His son Rafael would go on to become a noted entrepreneur most famous for founding the Bolivian Professional Football League and his time as president of The Strongest, one of the country’s most successful sides.

The six al-Hadwah sons, having arrived by steamer in Buenos Aires in the first half of the 20th century and adopting the name Jadue, then carried on east. Five went to Chile, where amongst their descendents are numerous notable figures, including Óscar Daniel Jadue, mayor of Recoleta, and Sergio Jadue, former president of the Chilean Football Association. However, the sixth cousin, Jhamil Jadue Saffadi, travelled on to Bolivia.

The majority of early Palestinian immigrants to Bolivia settled in the west of the country, along the Andes in cities such as La Paz, Oruro, Cochabamba and Potosí. This contrasted with immigrants from other parts of the Arab world, who tended to settle in the east of the country, working as miners or merchants. Jhamil Jadue settled in Vallegrande, in the western mountainous region of the Santa Cruz department.

There are upwards of 15,000 people of Palestinian descent living in Bolivia today.

Jhamil’s grandson, Antonio Jadue, recalled that in those days, with men arriving alone without close relatives, it was very hard to maintain the cultural traditions and practices of their homeland. ‘Keeping up their traditions was very hard since they arrived alone,’ he said. ‘They had to adapt to the Bolivian way of life.’ As such, it was very hard to preserve the Arabic language, the cooking of traditional food and other customs for early immigrants, and amongst the first generations of immigrants Palestinian identity became weaker and weaker. Antonio reflected that, ‘We lost two generations of Palestinians.’

Parents often did not make an effort to pass on their customs and language, and in this way the children born in Bolivia from Palestinian immigrants became isolated from their cultural heritage. This left what Antonio called a ‘great hole’, where men and women of Palestinian descent often would not even know of their roots, let alone communicate with their grandparents or greatparents in their mother tongue.

Antonio’s father, Jaime, one of seven sons, was therefore unusual in that he made a special effort to teach his sons about their backgrounds, believing that ‘once you lose your sense of identity you are nobody.’ As a child growing up in Sucre, Antonio learnt about the history and traditions of his grandfather's land, while his father also encouraged him to come together with others of Palestinian origin in cultural or sporting events, often organised through clubs which brought together those of Arab descent living in Bolivia. These experiences proved formative for the young man, instilling within him ‘a love for Palestine, for our land, our roots.’

Growing up, Antonio also became an indirect witness to momentous events taking place in the Holy Land on the other side of the globe. His father would often host immigrants who had recently come to Bolivia, providing them with advice in their new surroundings. He had a strong sense of duty, feeling that it was his responsibility to lend support to the newcomers. The stories of these new arrivals gave Antonio a glimpse into what it was like for those still living in Palestine.

These men and women left a very different Palestine than the homeland that Jhamil’s generation had left. The collapse of the Ottoman Empire, in 1918, dramatically changed the political landscape in the Middle East, with the British gaining control of Palestine. When, in 1947, the British announced their intention to withdraw, the country erupted into violence, as the Arab and Jewish communities competed to fill the political vacuum.

In the ensuing war, the new state of Israel, declared on 14 May 1948, roundly defeated the Palestinians and their backers in neighbouring Arab states, expanding beyond the borders allocated by a UN plan. In the process, over 750,000 Palestinians were either forced to flee or violently expelled from their homes by Israeli troops in what became known as al-Nakba, or ‘the Catastrophe.’ This created a wave of immigrants to Bolivia and other Latin American countries who arrived not as economic migrants but as refugees. In 1967, another decisive Israeli war victory led to the occupation of the remaining Palestinian lands in Gaza and the West Bank, which still continues today and has prompted another tide of refugees to flee the country.

Stories of al-Nakba made a deep impression on Antonio, despite not having experienced them first-hand. As a young man, Antonio became deeply dissatisfied with lack of awareness of the ongoing Israeli occupation and humanitarian crisis in Palestine. Though he belonged to the Bolivian-Arab Youth, an organisation that seeks to preserve and encourage Arab culture amongst the diaspora living in Bolivia, he came to realise that ‘meetings of young people in Bolivia wouldn’t help anybody,’ he said. ‘The meetings closed, and nothing more would happen.’ There was a need to assist those living under occupation.

As such, Antonio decided to found the Colectividad Palestina de Bolivia (CPB), which would not only represent the Palestinian diaspora in Bolivia but also play an active political role to improve the situation in Palestine itself. After consulting with similar groups in other Latin American countries, Antonio and his colleagues founded the CPB in 2000, at which point Antonio said ‘the Palestinian cause awakened in Bolivia.’

The Colectividad Palestina de Bolivia not only represents the Palestinian diaspora in Bolivia; it also plays an active political role to improve the situation in Palestine itself.

Since its creation, the CPB has focused on raising awareness of the situation in Palestine amongst ordinary people in Bolivia, working not only with the Arab community but within wider civil society, for example local church and faith groups, to educate and inform Bolivian society about the Palestinian cause.

However, it is on the international stage where the CPB’s development has been most impressive. As the organisation grew, it began to participate first in regional forums with similar bodies from around Latin America, and then in global pro-Palestine conferences. For example, as a representative of the CPB Antonio has travelled to conferences in Lebanon, Turkey and Morocco, amongst many other countries. He admitted that the work, especially the travel, can be draining, but he says that his overhwelming emotion is one of pride in being able to ‘raise the Palestinian flag high wherever I go.’

The CPB also played an important role in the opening of the Palestinian Embassy in La Paz in 2018. In 2017, at a meeting with Palestinian National Authority Foreign Affairs Minister Riyad Al-Malki in Chile, Antonio discussed the opening of an embassy in Bolivia, saying that it was ‘illogical that a country that provides such support for the Palestinian cause does not have an embassy,’ while the continued lobbying of the CPB was a key driving force as the plan gathered momentum.

The opening of the embassy highlights that it is not only the history of Palestinian immigration to Bolivia that binds the two countries together; they’re also bound politically, becoming closer allies. As Antonio notes, Evo Morales is ‘the first president to lend his unconditional support to the Palestinian cause,’ arguing the country’s case in the United Nations and signing numerous bilateral agreements. The latest of these was signed on 22 July, pledging closer cooperation on development issues and signalling that in Bolivia Palestinians have found not only a welcoming host country but a stalwart ally on the international stage. 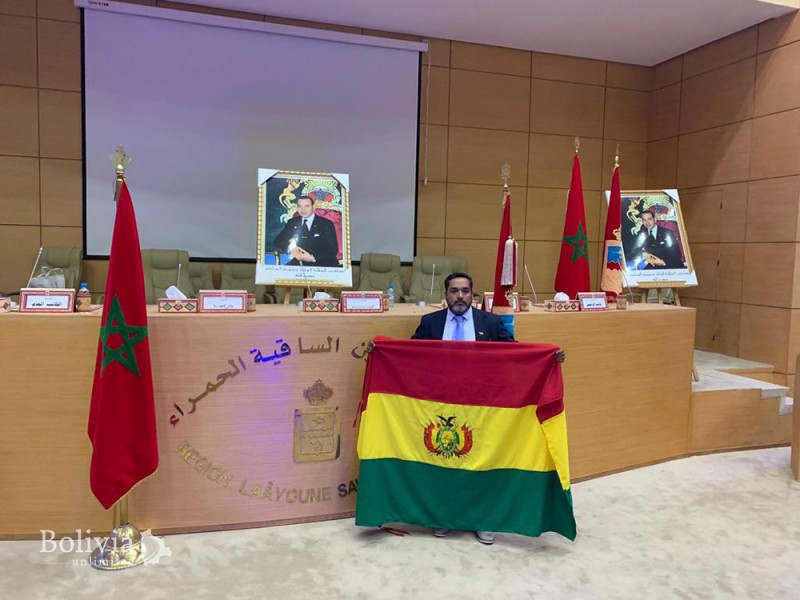