FOR THE LOVE OF THE GAME 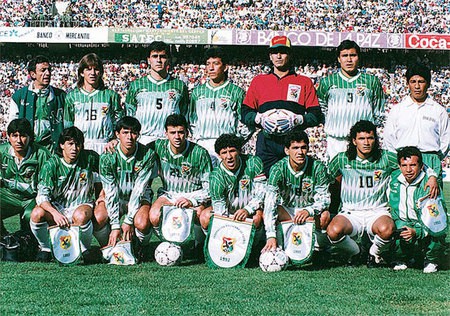 The importance of football in Bolivia is in no way proportional to the country’s achievements in the sport throughout history. Despite being a country that only holds a single Copa América title and has only once qualified for the FIFA World Cup, the game is still able to stir the deepest of sentiments among the Bolivian people. To understand why, BX speaks to a former president, a sports commentator, the former head of the national football federation, and an iconic musical family.

A historical moment for Bolivian football. For the first time in its history, Bolivia's national team qualifies for a FIFA World Cup by achieving a 1-1 away draw against Ecuador in their final match. The few Bolivians who were lucky enough to be at Monumental Isidro stadium in Guayaquil rise up as one in ecstatic celebration. Back at home, people are pouring into the streets, showing their red, yellow and green striped flags which flutter proudly in the wind. Others bear these stripes on their bare skin. People incredulously cram the streets partying. No matter their place in society, Bolivians stand united behind the same team.

'It was a fantastic explosion. People embraced the flag as a symbol of our nation’s achievement beyond racial or social distinctions’, says Toto Arévalo, who has been a sports commentator for almost four decades and has attended 9 World Cups. Arévalo was at the stadium in Ecuador that day and remembers the moment as a highlight in his career.

When I ask him whether any other event has caused similar sentiments among Bolivians, his answer is no. ‘It was the biggest event,’ he replies, ‘larger than any Presidential election’. After that day, Arévalo tells me, the hit single ‘Bolivia gana y se va al Mundial’ became Bolivia’s new national anthem.

Written by Familia Valdivia, the song played a critical and symbolic role in unifying the country. They wrote the song out of love for the team, even before Bolivia qualified. According to Noemí Valdivia, who is the mother of the musical family, they were convinced Bolivia would qualify that year. What they did not expect was the song to become a national hit.

So, why was the song so successful? ‘People identified with it’, is Noemí’s answer. What seems to have made the song so appealing, though, was its message of joy, collective victory and celebration. Also, after listening to the song a couple of times, the tune really catches on.

Bolivians have looked back at the 1993 qualifying season with nostalgia ever since. Books have been written and documentaries have been put together, all dedicated to that golden period in the country’s footballing history.

The World Cup of ’94 was Bolivia's moment to show itself to the world. The team had at last stepped into football’s biggest spotlight. Although Bolivia did not get past the first round of the Cup, the experience was, in Arévalo’s words; ‘una gran fiesta’. Bolivian people were proud of their footballing heroes. They were proud of being Bolivian.

In preparation for the event, coach Xabier Azkargorta played an important role as the team’s psychologist to instill, in the players’ minds, the sense of equality with their opponents. The aforementioned Valdivia anthem goes ‘y ju-gará de igual a igual’ - an allusion to the until-then unthinkable idea that Bolivia would play as equals against teams that had always seemed their superiors.

Tragedy, though, would define the experience. Only minutes into the opening game against Germany, Bolivia would lose its star player Marco Antonio Etcheverry. Etcheverry, who was known as ', received a red card for a misjudged tackle on Germany’s star player, Lothar Matthäus. As a consequence, he was forced to sit out of Bolivia’s remaining two games against Spain and South Korea.

Losing Etcheverry may have reduced the team’s chances of qualifying to the next round, but participating in the tournament was what mattered most at the time. Simply reaching the highest stage in world football was significant enough for Bolivia.

The question that puzzles me, though, is why football is so important in a country that holds very few victories in the sport. Bolivia doesn’t show up in FIFA's world ranking until the 68th spot, yet football is played and enjoyed everywhere — from windy dirt pitches in the Altiplano, to humid fields in the eastern tropics.

Could it be international recognition? Two of Bolivia's neighbours, Argentina and Brazil, have certainly succeeded in establishing an international reputation through football. This year, Brazil will get the ultimate chance to showcase itself as host of the World Cup. All the big channels from around the world will tune in and many foreigners will travel across the globe to see this sporting event live in action. Yet, Bolivia hasn’t come close to enjoying this level of international attention so the unwavering passion for the sport remains puzzling.

Perhaps the passion for football in Bolivia is rooted in the need for national unification rather than international recognition. As Guido Loayza, a former president of the Federación Boliviana de Fútbol (FBF), explains; ‘football emerged as a surprising meeting point for the country. The Cup of ‘94 showed us that we can stand behind a common objective and forget the things that separate us as a nation. It showed us that we can come together in a kind of catharsis’.

Former President Carlos Mesa also agrees that this was a rare moment of national unity. ‘Bolivia’s qualification to the World Cup constitutes a sociological phenomenon, not only linked to football itself. It constitutes a moment of unity in which people across the country could truly feel Bolivian. In later years we began to affirm our diversity through the constitution of the Plurinational state and the creation of local autonomies. The national football team comes second only to the sea as a symbol of unity’.

By now the 1994 celebrations have long died down and all that remains is a sense of nostalgia. It would be amazing to see Bolivia qualify again for a World Cup, if only to see Bolivia's true passion for football explode once more.

The results of last year’s qualifying rounds raise doubts as to whether that will happen anytime soon. Bolivia came second to last in South America's qualifiers which has left former FBF President, Guido Loayza, wondering about the future. ‘There has not been a detailed analysis of the non-football reasons for our success in ’93. I think this limits our ability to plan intelligently and achieve another classification. Those who don’t have a certain course will never have favourable winds’, he points out.

Bolivia’s national psychology remains blissfully trapped between a golden past which is at once half-imagined and half-remembered, and the undying promise of a glorious future which never seems to arrive. This is as true in football as it is in other domains. Away from international contests, football remains central to people’s lives across the country in neighbourhood league games and school playgrounds. In any case, Bolivia’s football history tells us that one can learn to love a sport without actually excelling at it. And it’s these everyday experiences of the game that show us just how deep this love can be.