Flight of the Bumblebees 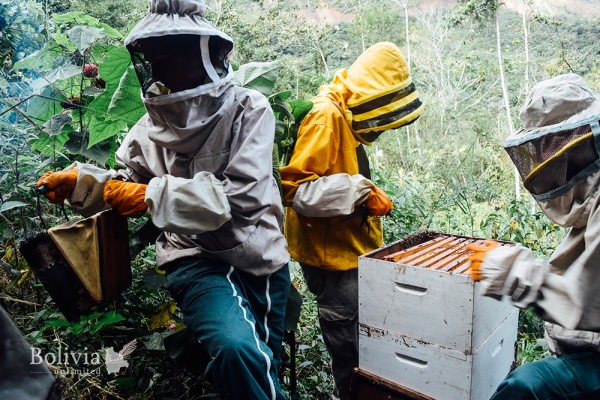 With a worldwide decline in the bee population, Yungas beekeepers protect their hives

Outside Coroico, a small town in the centre of the sparsely populated Nor Yungas Region, a select few begin the process of tearing apart egg cartons and breaking decaying wood into small pieces. They then light the material on fire and place it into a large metal cup, known as a smoker, which apiculturists use to spray bees with smoke in order to calm them. We are here to report on a trend that has been worrying many worldwide, the disappearance of the honey bee. According to Inti Rodriguez, the lead beekeeper, egg cartons and wood have a much ‘softer’ effect on the bees than other materials. Other beekeepers use sawdust, which has a ‘spicy’ effect on the bees, causing them to be more aggressive, and some even use rubber or gasoline, which both negatively affect the bees’ health and contaminate the honey with harmful toxins and a lingering taste.

Soon after, we were ready and clad in protective clothing, carrying our smokers and taking a 20-minute trek into the bush. The path was quite steep at times and often overgrown with brush and vine. The hives were hidden away in such difficult-to-get-to areas for their own protection. This is due to a variety of factors such as fear of robbery and even ignorance about the nature of bees. Doña Julia Mamani, whom the hives belonged to, said, ‘There are also people who are bad or think they are going to die with a bee sting, and that is why they kill them. There are people who even think that bees are bad for plants.’ This misperception has led members of local communities to attempt to find and liquidate the hives, either by fumigation or brute force. 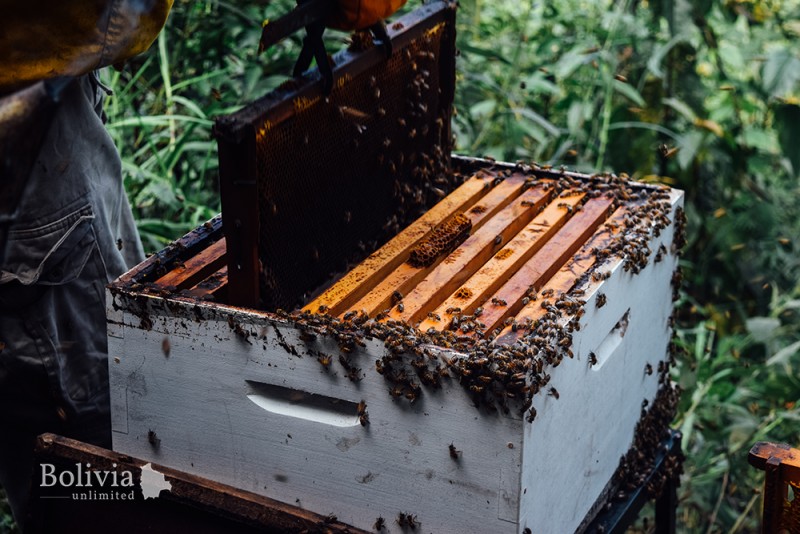 We soon made it to the final portion of the path that led to the hives. There we checked our equipment, suited up in our protective clothing and took a short rest to chew some coca leaves. During this sojourn, Rodriguez and Mamani began to speak about the challenges that bees now face. ‘In the chicken and pig farms, the use of antibiotics and hormones in these animals affects the bees when they consume water contaminated by faeces and rust that these farms discard,’ Rodriguez, said, explaining the dangers that natural resource mining poses to her trade. ‘Mercury is used to amalgamate metals and is thrown into the river, contaminating the water that is also consumed by bees to keep the hive in optimum conditions. The nectar then mixes with that water and the honey gets contaminated.’

The expansion of agricultural areas, especially coca plantations, has led to a variety of problems for the bee population, including worrying levels of deforestation. Natural areas where bees were originally able to go and harvest nectar are being converted into farms and plantations at a very rapid rate. The problem is greater when certain insects that feed on coca plants prompt the use of harmful pesticides. According to Rodriguez, ‘Some herbicides and pesticides used in this area contain glyphosate in its chemical components. In the local market it is known as “bazooka” and anyone can buy it. There is no proper control by SENASAG [the National Service of Agricultural Health and Food Safety Improvement], which is the entity responsible for regulating these substances; in Coroico it is sold in the middle of the street even though they are usually high toxicity chemicals.’ 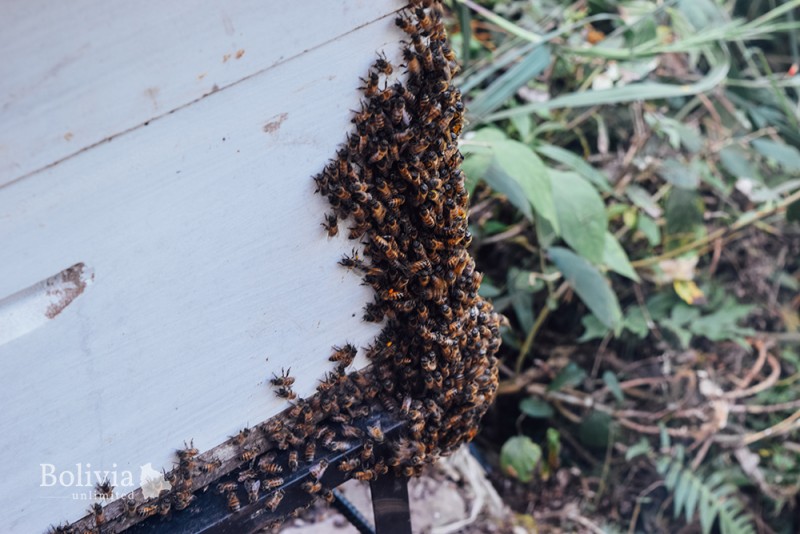 With our masks on, gloves and smokers at the ready, we made the short walk to a small ridge to find two sets of white boxes, stacked one upon the other. As the tin roof was removed from above the boxes, it was revealed that the screens used to protect the hive were too large and had allowed thousands of ants to gain entry. While the honey harvest had not been compromised, the battle that had occurred had left thousands of fallen bees under the hive. Slowly, one by one, Rodriguez and Mamani began removing each screen, examining them for the potential to harvest. The sound of buzzing bees was all around. White smoke billowed from the smoker, creating a fog of frantic bees attempting to defend their hive. The time for harvesting was not ideal. A few more weeks were needed.

This article was made possible through the non-profit organisation Corazón del Bosque. This group has made it a mission to help improve the overall environment in the Nor Yungas region through sustainable agricultural and reforestation projects in several different communities, according to coordinators Eloïse Andre and Romane Chaignau.