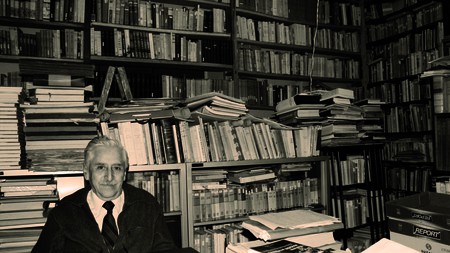 Behind a black door at 2448 Avenida Ecuador lies 'La Casa de las Flaviadas.' But it is much more than a home - it is a shrine to classical music and the life of a man with a passion.

Every Saturday at six o'clock a ritual begins behind the black door on Ecuador. The Flavianos gather to worship. They worship Beethoven, Brahms and Bach. They also pay their respects to Don Flavio Machicado Viscarra - the father of the Flaviadas.

The salon of his 73 year-old home was built solely for people to gather and listen. For this occasion the room is dimly lit and incense is burning. In the front of the room a memorial to the great musical creators, in the form of a stained glass window, shines over the meeting. The mismatched sofas and chairs mirror their occupants - diverse. There are tourists, expats and bolivianos, children and their grandparents, first-timers and experienced Flaviadas.

In the corner a grey-haired man sits in his best Sunday suit (even though it is a Saturday). He is an unusual disc jockey but he uses state-of-the-art equipment. Every weekend he spins vinyl records, cassettes and CDs that keep the crowd returning. He is the son of Don Flavio, Eduardo Machicado Saravia.

At this gathering there is an unwrit­ten rule - silence is required. The attendees sit with closed eyes and mouths. They close off all other senses so that their ears and minds and hearts are open to the musi­cal selection.

"The sense of it [the Flaviada], according to my father, is to be a cultural center, and also to let the people have a space to get lost, to be able to disconnect them­selves from the world," says Don Eduardo.

Don Flavio never played an instru­ment but his passion for music went beyond physical talent. His love of music was nourished in the Boston of the early 1900s. He bought a stereo and began to collect records and listen to music at nights in his apartment while his neighbors gathered to enjoy. When he returned to La Paz in 1938 it was his family members (the majority of whom are also well-known in the arts commu­nity), intellectuals and friends who gathered.

Some of the big names who have visited 'La Casa de las Flaviadas' include both international sensa­tions and local Bolivian academia, such as Cecilio Guzman de Rojas (indigenous artist who founded the School of Fine Arts in La Paz),

Leonard Bernstein (the American composer best known for his work on West Side Story), and Jaime Saenz (a famous paceno writer).

"This was an exceptional house," Don Eduardo tells me, "because of the meetings of a special group, intellectual people from different social origins. I asked my father: 'Why do you do this?' And he answered: 'Well, having so much and not sharing it would be a crime.'"

Now the house is home to La Fundacion Flavio Machicado Viscarra. It is always open and always humming with classical music. The Flavianos enter and exit as they please. Everyone is welcome from the seasoned composer to the drifting foreigner.

"I think what a tourist can get from it is to participate in a tradition. It is not a cliche, it is not part of the gringo tour, and it is not made for tourists. But everybody is welcome here because beyond being a tourist you are a human being," says granddaughter Cristina Ma­chicado, who has been helping with the foundation for the last two years.

The house is also adorned with an immaculate collection of books, newspapers, magazines and records. Don Flavio subscribed to papers in France, England and the United States following his return to Bolivia in the 1920s. He thrived on collecting music and information about music.

"My father used to say that a disc is like a book - a register that can be saved. For example the work of Ramanin when he plays his own compositions, or of Stravinsky when he directs in his own way. This is an archive," says Don Edu­ardo.

Therefore, sitting in on a Flaviada is an educational experience as well. Before every piece Don Edu­ardo educates the listeners on the life and sentiments of each artist, just as his father did. He also con­tinues to keep impeccable records of letters, articles, and drawings about the Flaviadas. Although he did not consider himself an expert, Don Flavio was a definite aficio­nado.

"The only thing I think must go on is comprehension, this thing of sharing his passion. All this material has to be accessible to anyone, not only artists or art students or intellectu­als, just people who are interested and curious," says Cristina.

The story of the Flaviadas is also the story of a family. After Don Flavio's death in 1986, his youngest son Eduardo took the helm of the Fla­viadas. Eduardo grew up listening to the music and mingling with the intellectuals and commoners that passed through. Like all Flavianos, his understanding of music was enhanced by his close relationship with his father:

"When I was a kid I used to go to concerts with my father and he used to say that in the end your life is the continuity of what the one before you did, and I can see it, with my children. Cristina, for example, didn't know my father, but she talks about him as if she'd been seeing him doing everything each day."

During the first Flaviada of the year Beethoven's Ninth Symphony could always be heard coming from Ave. Ecuador. It is a tradition of Don Flavio's that his son and granddaughter continue today. "The Flaviada is a family thing," says Cristina. "The name comes from Flavio. It is a synonym and here it means to go to Don Flavio's house to listen to music."