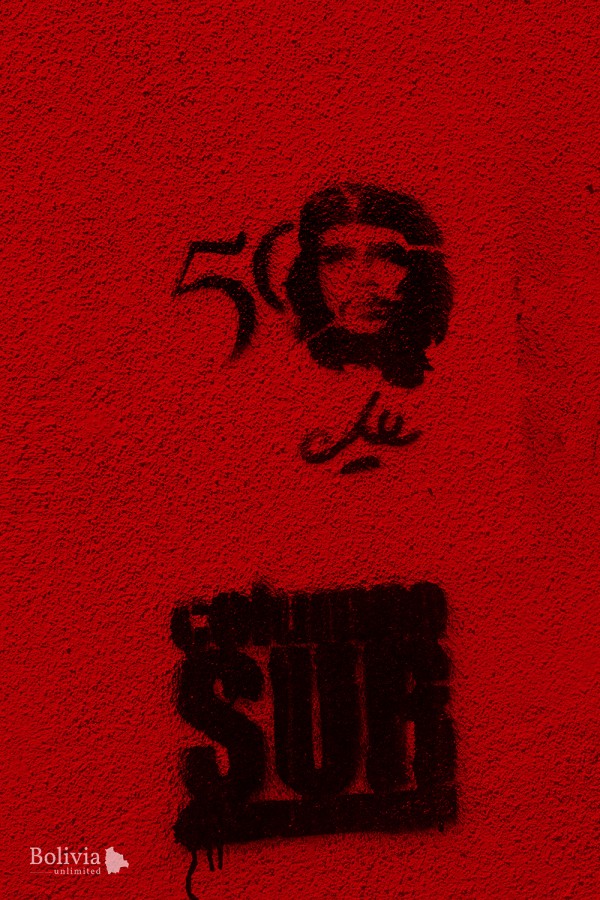 On October 9, 1967, Ernesto ‘Che’ Guevara, famed Marxist revolutionary, was executed by the Bolivian military (with an assist from the US Central Intelligence Agency). It was the climax of an ill-fated yearlong insurgency in the remote Bolivian countryside. Led by Guevara, a 24-man band of guerrillas (of which only nine were Bolivian) – the Ejército de Liberación de Bolivia (ELN) – wandered for months through the mountainous scrubland and densely forested valleys of south-central Bolivia. They would alternatively attack and be attacked by the Bolivian army near their original base along the Ñancahuazú River until, depleted of supplies, starving and lost, they were ambushed in a quebrada not far from the impoverished pueblo of La Higuera. Guevara, with a bullet wound in his leg and his rifle damaged, surrendered to a Bolivian military patrol.

Dirty and disheveled, Guevara was imprisoned in La Higuera’s mud-brick schoolhouse and interrogated first by Bolivian military officers. Asked why he, an Argentinian, was attempting to foment revolution in Bolivia, Guevara replied: ‘Can’t you see the state in which the peasants live? They are almost like savages, living in a state of poverty that depresses the heart, having only one room in which to sleep and cook and no clothing to wear, abandoned like animals…’ Then a tall well-fed man in a Bolivian military uniform entered the room. Cuban exile and CIA asset Felix Rodríguez, onetime anti-Castro Bay of Pigs combatant and future player in the Iran-Contra scandal, had been sent by his Washington masters to advise the Bolivian military in its hunt for the famed revolutionary. After a few questions, Guevara sensed that Rodríguez wasn’t a Bolivian national, guessing that he was either a Cuban or Puerto Rican working for US intelligence. Rodríguez confirmed he was a member of the CIA-trained anti-Castro Brigada Asalto 2506 (which attempted to invade Cuba during the failed 1961 Bay of Pigs invasion). Guevara, perhaps unsurprised at the long reach of el imperio, only replied with a ‘Ha!’

Over the objections of Rodríguez, who relayed Washington’s desire that Guevara be flown to Panama and transferred to American authorities for further interrogation, the Bolivians decided to execute him immediately. When told of his impending death, Guevara’s face turned white but he defiantly said, ‘It is better like this…I never should have been captured alive.’ The Bolivian military commander (Gary Prado) in charge asked his men for a volunteer to execute the rebel commander. Sgt. Mario Terán stepped forward. Rodríguez instructed the sergeant not to shoot Guevara in the face – it had to look like he received the wounds in combat. According to legend, Guevara told Terán, ‘I know you’ve come to kill me. Shoot, coward, you are only going to kill a man.’

At 1:10pm, shots rang out. Ernesto ‘Che’ Guevara – hero of the Cuban Revolution, guerrilla leader in Africa and South America, anti-capitalist icon and the man whom philosopher Jean-Paul Sartre called ‘the most complete human being of our age’ – was dead. The Bolivian military amputated his hands for identification and buried his body in an unmarked grave in the nearby town of Vallegrande. Not until nearly 40 years later would it be discovered on the grounds of a Bolivian military airport.

It is ironic, then, that at the site of that airport is a new museum celebrating the life and death of Guevara. In the 50 years since his death, Bolivia has undergone a profound transformation, in which several military dictatorships have come and gone, a process that has culminated in the 2005 presidential election of the proudly socialist Evo Morales and the appropriation of state power by his MAS (Movimiento al Socialismo) party. 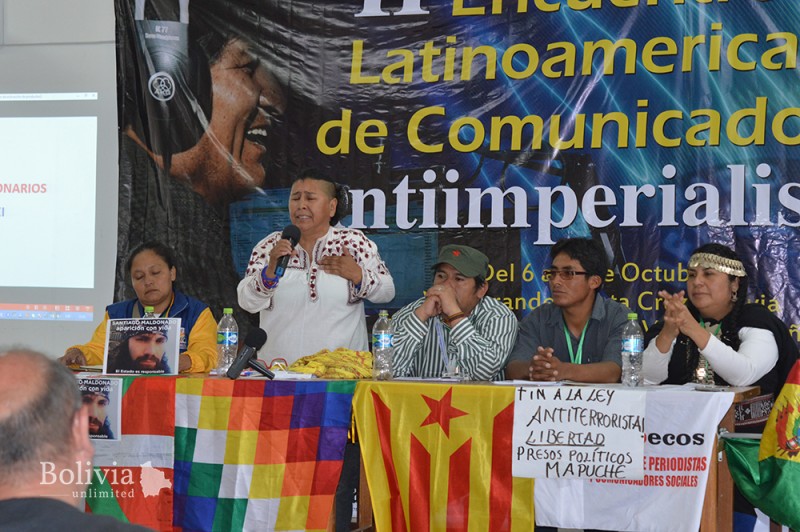 ‘Bolivia must be sacrificed so that the revolutions in the neighbouring countries may begin.’

Not surprisingly, the history of Guevara in Bolivia has been reappraised. With a leftist administration that has formed a tight alliance with both Cuba (under the Castro brothers) and Venezuela (first under Chávez, now under Maduro), the Bolivian government has appropriated Guevara’s legacy in Bolivia – to the delight of Morales’s allies and the consternation of his political rivals. A Ruta del Che tourism industry has sprung up, with stops in Samaipata, which the ELN momentarily took over in July 1967; La Higuera, where monuments to Guevara surround the schoolhouse in which he was killed; and Vallegrande, with the aforementioned museum and gravesites of other fallen guerrillas from the ELN.

On the 50th anniversary of Guevara’s death, Vallegrande hosted conferences and celebrations as a tribute to the fallen revolutionary. Participants of the Latin American Encounter of Anti-Imperialist Communicators met to commemorate the fallen fighter and strategise on how to facilitate the international struggle against the creeping capitalist influence. Among others, speakers included Mewlen Huancho, a Chilean representative of the indigenous Mapuche tribe, who are battling the government of President Michelle Bachelet over land rights; radical Argentinian journalist and former Montonero Carlos Aznárez; and radical Bolivian feminist Julieta Paredes, from La Paz’s Mujeres Creando women’s collective.

Huancho spoke of her people’s struggle against the Chilean state, in which the Mapuche have suffered discrimination for centuries and have sought to regain their traditional lands. Even under Bachelet (a liberal head of state after the dictatorship of 1973–90 and successive centrist governments), the Chilean government has responded with violence to indigenous demands. Aznárez spoke about the case of Santiago Maldonado, a young Argentinian who disappeared during a Mapuche land-rights protest and was last seen in the custody of the Argentinian gendarmerie (days after the conference concluded, his body was found in a river near the site of the protest). Paredes gave a rousing speech about sexism in leftist circles, and about how feminism can mitigate ‘toxic individualism’ – something Guevara’s iconic place in history all too often embodies. Although this disparate collection of leftists is hewing to Guevara’s notion of international revolution – in Chile, Argentina, Bolivia and throughout South America – they seek this transformation through solidarity and not armed struggle.

Vallegrande’s 50th-anniversary celebration of Che’s life, death and legacy was a oftentimes-incongruous affair. T-shirts with his famous countenance were on sale, as were guerrilla caps featuring embroidered red stars. Mercados were full of merchants selling local handicrafts; hotels were overpriced and booked full; and tourists stood in line and paid admission to visit the graves of Guevara’s fellow guerrilla fighters. Older men walked around in freshly pressed fatigues, and a surprise appearance by Guevara’s elderly brothers and their families excited bands of young Argentinians in attendance. Although their look, songs and dances were more in line with those of fútbol fans than salty, unwashed guerrilla fighters in the jungle, they had a youthful enthusiasm that attenuated the contradictions of the event. Sure, this was a celebration of a foreign man who tried and failed to foment a Bolivian peasant revolution; a man who rejected the wishes of the Bolivian Communist Party’s leadership, which insisted that democratic reform, not guns, would lead to victory. This was a man who was willing to sacrifice Bolivia so that revolution in neighbouring countries could succeed. And 50 years later, socialist Bolivia is surrounded by neoliberal states.

But in some small way, the spirit of Guevara lives on. His militant drive to force change – through violence, through armed insurrection – has evolved in his self-proclaimed political heirs. Instead of guns, there is coalition. Instead of a long slog through the jungles and scrub, there’s a long slog to the all-too-imperfect ballot box. Instead of a monomaniacal will to power through revolutionary force, there are scrums of young people on the street, singing songs and snapping pictures, chasing the ghost of Che Guevara in the foothills of the Andes.