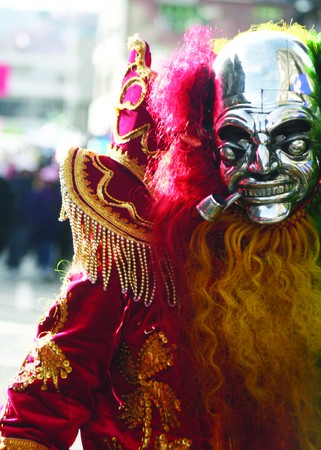 As a European new to La Paz, my first experience of a Bolivian festival was a breathtaking one; as I watched the volume and vibrancy of the Entrada pass, I wondered what could inspire fifteen thousand people in such a collective effort. Moreover, I was astonished to learn that this monumental event was not a one off occasion, but one in a long string of festivals and celebrations threading throughout the Bolivian calendar and bunching up into a prolific August bundle. Whilst my colleagues dashed around surveying the various explosions of colour, light and sound popping off this month, I stepped back for an overview of the Bolivian passion for festivals throughout the year.

One of the most popular feasts in La Paz, it takes place on a saint’s day and is generally celebrated with a community or family. Starting with a church service, a procession will then leave from the church to one of the families´ houses, with an elder carrying an icon of the saint at the front. It features Folkloric dancing and drinking, need we mention, plus sacrifices to the Pachamama. Once back at the house, a lively party ensues, with each family providing a different commodity, like music, food, or drink. There is also a tradition the parties increase in size each year, so if five cases of beer are drunk one year, six must be provided for the next!

6 Day festival dedicated to Ekeko, the god of plenty.
Father Christmas, but without the beard, clothes or reindeer. (The likeness is astounding, trust us). Don’t expect your presents wrapped, they come a-dangling off him like little round baubles. If it wasn’t for his pot belly and twirly moustache, you might mistake him for the said father’s tree.

Copacabana. The Bolivian patron saint, she’s so special she gets two birthdays, one in February and another in August. (see p23)

Every year Jesus returns to battle the legions of bunnies advancing towards Semana Santa. In La Paz, he always wins. In the UK he’s less fortunate.

Part III of the Jesus trilogy, it’s a bit like having a posthumous birthday party, which also happens to be La Paz’s hugest Preste. It has always been controlled by the indigenous communities of La Paz, with their different cultures and religions represented in the dances and costumes of the procession, which traditionally goes through the richer, whiter areas of La Paz.

celebrated at Tiahuanaco, near La Paz. Get up ridiculously early to freeze yourself to death watching the sunrise over some sacred ruins. It’s definitely worth it.

Persistent with the living, Bolivians can’t stop themselves offering drinks to the dead too. Today’s party is shared with you on p12.