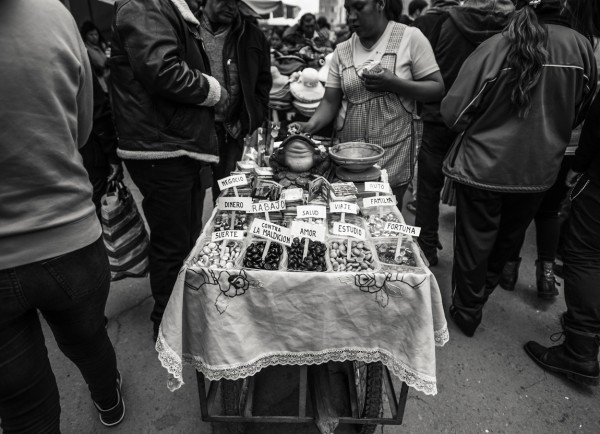 Walking around the Feria of Alasitas, crowds move together and street vendors shout ‘¡Dólares! ¡Dólares!’ as the smell of palo santo smoke from yatiris hangs in the air. The sensations can be overwhelming, but these are the sights and smells every day during late January through February, when artesanos sell miniaturas during the festival.

There are miniaturas of every description here, small figurines that represent the buyer’s wishes for the following year. Some are literal: a tiny cardboard laptop, a driving license. Others are more obscure: a chicken or cockerel for a romantic partner, or an elephant for luck. The festival is growing every year, and one artesana believes people’s dreams are coming true due to the miniaturas, that they are returning with friends so they too can benefit from it. ‘It's popular because everything is made in miniature, and people have it all within reach,’ says Claudia Blanco, one of the vendors.

‘It’s a tangible heritage,’ Claudia continues, and this tangibility is certainly reflected in the changing miniaturas available at the festival. Milton Eyzaguirre Morales, the Director of Museum Extension and Development in the Museo Nacional de Etnografía y Folklore (MUSEF), believes this development of tradition is important. ‘When you take a rural ritual into an urban space it is transformed,’ he says. This transformation is present in the changes from the original miniaturas of food and cattle, to ones representing every modern desire imaginable. From Milton’s perspective, this evolution is a positive turn of culture. ‘The artesanos represent what is current, what is in fashion,’ he says. ‘The Feria de Alasitas has appropriated modernity; modernity has not taken over Alasitas.’

The artesanos create people's dreams and desires out of clay and ceramic, and the people are in turn responsible for fulfilling the dreams of their artesanos.

In some ways this is true. As the hopes of the public change, the illas that represent those hopes change too. The word illas comes from semillas (‘seeds’), representing the dreams that develop from these small representations. Milton mentions that the miniaturas of today are in fact illas as they are ‘elements [the public] want to grow in the future’, rather than ornaments.

However, the move towards selling modern, mass-produced miniaturas makes it easier for vendedores to sell dólares and toy cars by the score, and at only one boliviano each, this undercuts traditional artesanos and their handmade miniaturas. According to artesana Sonía Catacora, ‘We sell them to be able to eat, in order to live.’ And it’s also detrimental to the state, as the vendedores do not pay taxes for their space. ‘We are waiting for the support of the public,’ Sonía says.

Sonía loves being an artesana. As a girl, she made toys, frying pans, pots, and plates out of mud and clay, baking them in the sun even though they’d break. And all the other artesanos I spoke to also love their craft. Like Sonía, they are passionate about their art.

The public has to choose to support the livelihoods of artesanos like Sonía and Claudia, who spend all year painstakingly crafting their miniaturas by hand, not just by programing a machine. As the artesanos create people's dreams and desires out of clay and ceramic, so the people are in turn responsible for fulfilling the dreams of their artesanos.