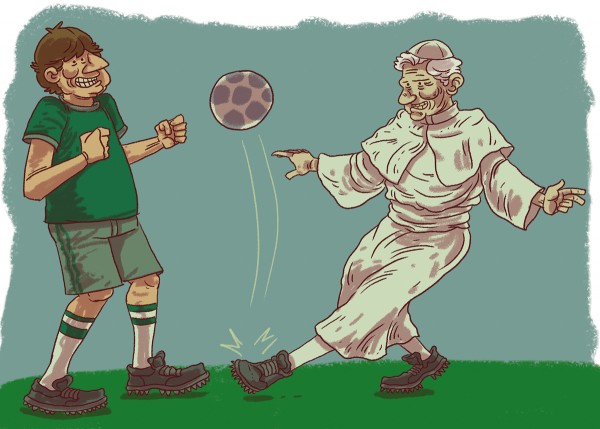 Pope Francis, in his last youth conferences in Rio de Janeiro in 2013, presented a motivational and enlightening message for the thousands of devoted young Catholics who had the opportunity to hear him speak. The pope expressed to the assembled faithful that the Catholic Church is like a football team in a match, and the laity comprises hinchas, or fans, of that game. When unconstructive criticism about the management of religion and about the church as an institution is made by those outside of the ecclesiastical authority, it is like the hinchas shouting outrageous insults at players who make bad passes or don’t convert easy-goal opportunities.

With this metaphor, Pope Francis affirmed that the church has a notable absence of forwards (especially taking into account that this writer is a young Catholic who still has significant doubts about the human—but not the divine—element of the Catholic Church), and that he passes this opportunity to us, putting himself back as the last line of defence so that we can play as forwards in the centre. Without a single doubt, and because of the passion felt for everything to do with football in the Latin American hemisphere, it was not difficult to imagine putting on the No. 9 shirt and entering a colossal stadium overrun with spectators, ready to play a match that would truly present all of the challenges that one could hope to face. In this imaginary match, one here would represent Bolivia, playing for a chance to advance to the World Cup.

All of this means that it is important to stop idealising the church and accept it with all the imperfections that come with any institution that is managed by human beings. Undeniably, it will consist of more than just the ideology, beliefs, and the values it imparts. Before being critical, we have the opportunity to be protagonists and have the chance to turn the tables with regards to the mad perception of the church that has been established over the last few decades—because this does not have anything to do with faith.

In Bolivia, with the establishment of the Andean cosmovision that has been adapted by our leading politicians, it was thought that President Evo Morales would be a fervent player on the team opposing the Church. In fact, he declared in 2009 that the church was a symbol of European colonialism, and must be wiped from the country. He also took action to abolish religious material in schools.

A few weeks ago, I was happily surprised to find out that the government had confirmed Pope Francis’s visit to Bolivia, to the cities of La Paz and Santa Cruz, and that it had been working with the representatives of the church to coordinate the arrival of the Sumo Pontífice. This visit illustrates that Morales is aware of the country’s large Catholic population, and the importance it places on the unifying spirit and message that the Pope represents. Indeed, it could be a stimulus to face up to our differences as a country, and to once again recalculate ideological differences.

This type of visit also unites us in a single beat, from the planning, logistics, and the arrival, just as we were united by the Bolivian football selection as they entered the North American pitches to play in the 1994 World Cup.