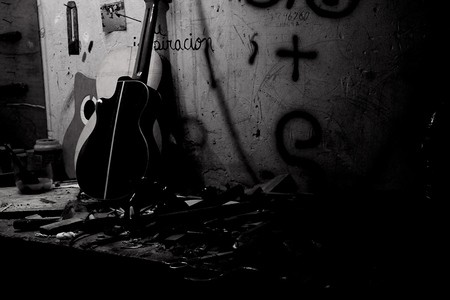 El Alto is one of the fastest growing city in Bolivia in terms of population, architecture and ideas. Lulu Shooter discovers that there’s more to life within the close-knit neighbourhoods than meets the eye. A storm is brewing.

Children and free-range chickens play in the front yard. Through a low, corrugated iron doorway comes the sound of a luthier’s workshop. Wood knocks against hollow wood, and someone is furiously sanding. Somewhere in El Alto, this is the entrance to a factory owned by the Orosco Claros brothers, Stiven and Gustavo. The building is also their home. Inside, it’s small and dimly lit; wooden skeletons lean against the wall and fretted necks are lined up along the workbench.

They are making guitars. The production line appears chaotic, but it soon becomes clear that the organization is in fact meticulous. It has been streamlined and improved over the past ten years, since Stiven and Gustavo started their business. It takes between 40 days and eight months to produce a guitar at their workshop: A top spec instrument can cost up to Bs. 5,000.

Regardless of price, even the cheapest instrument receives the same level of care and attention as the most expensive one; whether it is the three-quarter size model, popular with John Lennon-channeling travelers, or the full-size bespoke classical.

Across town, on the first floor of a red-brick house, René Acarapi Choquetarqui leans out of the window and waves me up. His family produce guitar cases, confining their chickens and dogs to the ground floor. René sketches out designs whilst his wife, Eleuteria Cuentas Herrera, works at the sewing machine. For seven years, they have produced a steady ten guitar cases every two days. They could make more – more cheaply and more quickly – but René and Eleuteria are proud of their handmade goods and value quality above quantity.

Neither household could run their business successfully without the support of the surrounding community. They sell their products in la Ceja, a central neighbourhood described by one of La Paz’s residents as the ‘Piccadilly Circus of El Alto’. They also rely on word of mouth. Although the Orosco Claros’ brothers have had internet access in their home for more than a year now, they only use it to source obscure machinery and spare parts.

So how do these businesses function within the community? Is there a lot of competition between similar enterprises? ‘No’, answers Maximo Quispe Ticona, conflict secretary of FEJUVE El Alto, the community organization facilitating life in the city’s 14 districts. When I visited the offices, he explained to me that El Alto is largely formed of migrants from the countryside who bring with them complementary skills in textiles, carpentry and machinery. The businesses thrive because they feed into one another.

Not only do urban businesses reflect rural skills, they also showcase a neo-Andean attitude to the work-life balance. René moved from the countryside to El Alto in the 1980s, and brought his work ethic with him. He and Eleuteria make no distinction between labour and leisure, working from eight in the morning until nine at night. From Monday to Saturday? ‘Lunes a Sabado’, he confirms. They occasionally take breaks to eat and watch TV. Work is their life. As you hear a guitar picking out the chords of A Hard Day’s Night, you realise the Beatles had no idea what they were talking about.

In El Alto, completing the family home is second to running the family business. If you walk down a road in El Alto, you’ll be struck by the number of half-finished buildings you’ll see, often without roofs. The initial installation of amenities, such as electricity, gas and water, demands a lengthy registration and taxation process. People often have little money left over to dedicate to further renovations. As a result, building is an open-ended affair.Who knows how big the family will get and how successful the business will become? Will it ever be finished? Good thing Beatlemania in El Alto provides a never-ending market for new guitars in new guitar cases.

Life in El Alto is evolving as the current crop of youngsters fuse the influences of rural life with the gritty experience of the city. Some, like Stiven’s ten and eight-year-old boys, have already started picking up their parent’s trade, learning how to make guitars. Others are part-time minibus drivers, shop assistants and construction workers. There are also those following an academic pathway, and René’s daughter, Laura, is not set to carry on the family business but become a teacher: ‘I like Physics’, she says. New skills + traditional skills + a good education = a whole new Wonderland.