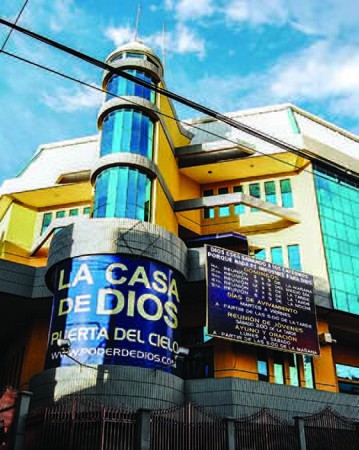 Evangelical churches in La Paz do not exactly promise a home visit from the local pastor, a place in heaven, or a seat on the flower-arranging committee. They offer miracle solutions to problems varying in magnitude from arthritic feet and terminal cancer to financial instability.

While these organisations are, according to their rhetoric, open to the general public, getting an insight into their practices is more complicated than it may first seem. These churches have a paradoxical relationship with the press, on the one hand owning large media corporations spanning radio, print, television and online channels, yet on the other hand being all but closed off to inquisitive journalists such as myself. Years of unfavourable media attention, political disputes between factions, and the large sums of money they mobilise, have turned these churches into organisations which are at once attention hungry and media shy.

As a first attempt, I try to enter the ‘Pare de Sufrir’ church a few blocks from Plaza Murillo. My first impression of the edifice didn't correspond with my mental image of what a church is supposed to look like: instead of finding myself in front of a neo-gothic building with decorative flourishes, I find myself in front of a businesslike facade made up of grey marble, glass doors and spotless brass features. Upon entering the atrium I am met by two besuited security guards and a receptionist, none of whom are interested in satisfying my curiosity.

After further failed attempts I approach another similar church, the grandiloquently named ‘Ministerio del Nuevo Pacto Poder de Dios’ (Church of the New Covenant and the Power of God). This church, commonly known as ‘Poder de Dios’, owns a radio and TV channel, and has even launched its own political party, 'Concertación Nacional', filling the stadium Hernando Siles and the Plaza San Francisco during the rallies of their heyday. While its fortunes have receded somewhat in the last few years, it remains the largest evangelical church in Bolivia.

I am put in contact with Roberto, a member of the congregation, whom I eventually meet after navigating my way through the labyrinthine passageways known as 'Mercado Uruguay'. On finding my Livingstone, we settle in an intimate alcove of a small juice stand, the walls of which are covered in sooty posters of football players, wildlife scenes and colourful devotionals of Jesus Christ.

Roberto, a 55 year-old Paceño with a hardened lined face, scrapes his living as one of the several thousand traders who buy and sell their wares in this mercantile quarter. Upon being asked how long he had been a member of Poder de Dios, he replied instantly that he has ‘always followed Christ’. On my tentative insistence he explained that he has been attending the church for the last four years after an introduction by his wife, who’s been a part of Poder de Dios for the past twelve.

Roberto attends the flagship Poder de Dios megachurch, 'El Monumento a la Fé, Casa de Dios, Puerta del Cielo' once a week on Sundays. Thought visited once a week, Roberto follows Poder de Dios' precepts ‘all days’. He informed me that ‘around 15,000 people attend the first session’, a fact corroborated by several estimates that up to 40,000 worshippers pass through the temple throughout the rest of the sabbath.

Roberto, himself, has experienced various miraculous recoveries from medical ailments, all of which he attributes to Poder de Dios. He recounted suffering from nosebleeds ‘every evening at 7.30 p.m.’, until his wife prayed and ‘handed him to God, Instantly curing him’. His wife, similarly, suffered from pneumonia a few years ago until he prayed at church and was able to witness the disease leave her body. She has been clear of it ever since. When asked whether he considered going to a doctor for his ailments, he explained that his body reacted badly to anaesthesia, adding that he was once hit by a doctor as a boy, leading to his rejection of the medical profession.

Yet his stories, incredibly, are not extreme by the standards of the Poder de Dios website. Featured on this portal are stories of pious members being cured of cancer and arthritis, as well as bizarre cases of people not only being ridden of serious tooth pain, but miraculously appearing with a mouth full of gold-plated teeth. Roberto explains that dentists who were brought in to examine this phenomena, stated that the metal was not used by their profession. Roberto’s conclusion is that the metal must have ‘come from the heavens’ and is therefore ‘supernatural’. Based on such cases, Poder de Dios distributed pamphlets which invite people to 'come and find your miracle'.

After speaking to Roberto, it became clear I had to visit 'El Monumento a la Fé' to see for myself. Following my experience at the central branch of Pare de Sufrir, I was all too aware that attempting access using my pigeon Spanish and European visage could pose an issue. However, I was determined; and arrived with a group of friends under the pretense of being teaching volunteers keen to explore our Christian faith away from home. The only information I have on this enormous edifice is the computer generated image I found on their website, as well as the fact that it was built on top of the former factory for Papaya Salvietti, a popular fizzy drink.

The ostentatious 'Monumento a la Fé' has the look of a half-finished sports stadium painted yellow with polarized blue tinted windows. We were quickly ushered into a service held in one of the smaller chambers, where 50-or-so men and women were being dizzied into frenzy by a band playing repetitive and gradually climaxing music. The band was fronted by a tie-and-shirt-wearing pastor who sang and spoke in simplistic devotional phrases with sudden bursts of motion and cadence. The congregation reacted to each crescendo with tears, wails, shrieks, shouts, and even the occasional jumping fit. Cholas, teenage girls and middle class women all clutched tissue ready for the next torrent of tears. When the senior pastor finally took to the podium, he launched into the most staccato, ear piercing and animated recitation of Luke's gospel I have ever heard. The congregates further descended into hysteria with one chola even banging her head on the floor, seemingly out of control.

It is difficult not to feel uneasy enduring suspicious looks from members of the church staff, as well as the wall to wall wailing of our fellow attendees. At one point the preacher nodded to an assistant to bring forth the donations bucket. In a united Pavlovian fit, the entire swaying congregation suddenly halted in their trancelike states to fight to reach the assistant first and donate in their money. To witness congregants being overcome by such desperation to donate money —for impoverished folk any sum is large—was a truly uncomfortable spectacle for a first-world denizen.

While on that day I did not witness any healing miracles, I was able to see the level of power the Poder de Dios Church levies over its members, seemingly premised on a dual mastery of emotive manipulation and show business. The most remarkable discovery of my investigation was the everyday regularity of such holy intervention, part of a worldview in which miracles are not a rare occurrence but rather a phenomenon that can be brought about routinely by following a ritual involving frenzied prayer and large donation, in more or less equal measures.

By 6 a.m. around 200 people gather at the ‘Monumento a la Fé’, and more congregants gradually arrive from every corner of the city, El Alto, and even remote rural communities. The majority of the attendees are women wearing polleras.

The female preacher and self-proclaimed Prophet Mrs Magneli (the wife of Luis Guachalla, leader of the church) comes onstage. Magneli addresses sceptics, some of whom seem to think that the money donated goes into the pockets of preachers. She denies this claim explaining that the donations are being used to buy a new satellite for the church’s TV station to expand its reach.

A second group comes onstage bringing offerings in the form of large sacks of rice and potatoes. There are two small children, one of whom has leukemia. They pray to the Lord and curse the devil. Magneli marks some worshippers with oil and blows on them. They fall to the ground and tremble. Some of them laugh uncontrollably. A man who came onstage with breathing problems claims he no longer feels anything, and proceeds to run in celebration. Minutes later a woman is carried onto the stage. She is on a bed lifted by four people.

Magneli makes reference to the tithe and its importance, pointing out that this is money that belongs to God. ‘You can fool me but you can’t fool God; he knows how much you earn and therefore knows what 10% of it is. Not giving him this money is theft’. She sends a group of around 50 young men with donation buckets to every corner of the audience to collect the ‘voluntary’ offerings.

There are around 8,000 people at 8:30 in the morning when the leader of the church, the self-proclaimed ‘Apostle’ Luis Guachalla, finally appears onstage. At around 9:00 Guachalla begins his sermon. This is the central moment, and despite the heavy atmosphere caused by the heat and humidity brought about by having thousands of people in an enclosed space, they all stay. He finishes the sermon with an explosive ‘Power of God!’, making the entire audience enter into a cathartic state of mass frenzy. People fall over forward and start trembling on the floor. ‘This is the Holy Spirit acting within you brothers and sisters’.